Rewarding children for lost teeth is an age-old tradition … and a little more complex of a job than the Tooth Fairy lets on. The Original Tooth Fairy Poll®, sponsored by Delta Dental, indicates that several circumstances may determine the amount the Tooth Fairy gifts. The No. 1 guiding factor is how much spare cash the Tooth Fairy has on hand (46%).

So, what other key considerations may influence the Tooth Fairy's generosity? 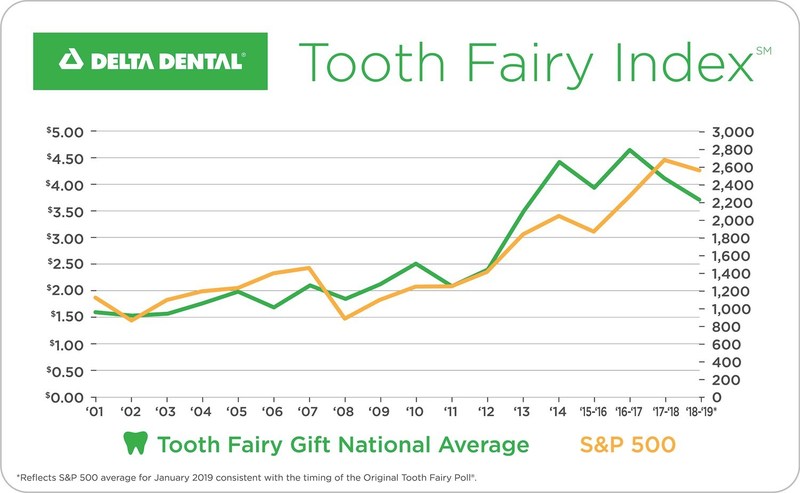 No. 3: The Tooth Fairy remembers historical payouts and then determines comparable amounts to what children's parents received when they were young (29%).

No. 4: Santa isn't the only one keeping a list! The Tooth Fairy is mindful of kids' recent behaviors indicates 1 in 5 parents (20%).

No. 5: The Tooth Fairy is keeping a tally of lost teeth. How many teeth children have already lost (18%) is a top factor in deciding monetary rewards.

Tooth Fairy payouts slide for second year in a row

According to the Original Tooth Fairy Poll, the Tooth Fairy's average cash gift declined to $3.70 for a lost tooth, which is down by 43 cents from a year ago.

Not all parents say the Tooth Fairy is following the national average. In homes that the Tooth Fairy visits, close to 2 in 5 parents (37%) share that their children receive at least $5.00 or more. Also, a first lost tooth continues to impress. The Tooth Fairy appears to recognize that this is a monumental tooth as indicated by kids' receiving an average gift of $4.96, representing $1.26 above the $3.70 average for subsequent lost teeth.

Delta Dental has been gauging the Tooth Fairy's U.S. annual giving trends for more than two decades. The disclosed value of a lost tooth may be slipping but is significantly greater than the 1998 national average of $1.30, which equates to about $2.00 today with inflation.

Value of lost tooth and economy

The Original Tooth Fairy Poll has typically served as a good indicator of the economy's overall direction, tracking with the movement of Standard & Poor's 500 Index (S&P 500) for 14 of the past 17 years. A year ago, a single lost tooth was valued at $4.13 and dropped to $3.70 in this year's survey, down 10%. Over the same time period, the S&P 500 also saw a decline and decreased by 3%.

Delta Dental Plans Association, based in Oak Brook, Illinois, is the not-for-profit national association of the 39 independent Delta Dental companies. Through these companies, Delta Dental is the nation's largest provider of dental insurance, covering more than 80 million Americans, and offering the country's largest dental network with approximately 156,000 participating dentists. In 2017, Delta Dental companies provided more than $61 million in direct and in-kind community outreach support to improve the oral health of adults, children and infants in local communities across the country. For more information, visit: deltadental.com.