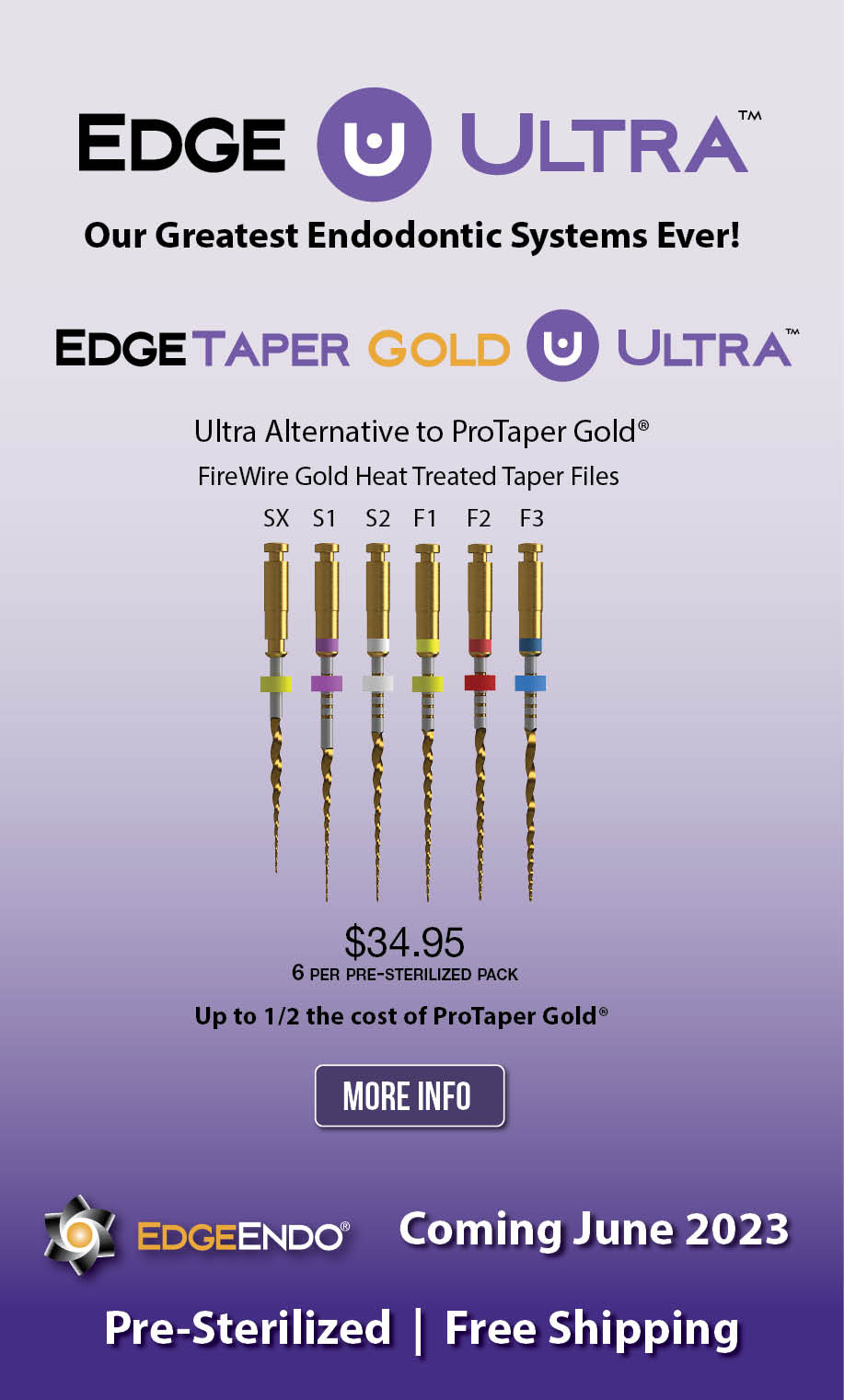 The New Shape of Endodontics

We have come a long way from Pierre Fauchard's first barbed broach, which was made from annealed piano wire, to the first stainless-steel rotary endodontic instruments introduced in the beginning of the 20th century. In the early 1990s, advancements in metallurgy led to the introduction of super-elastic nickel titanium (NiTi) wire rotary files that helped to preserve the location of the natural axis of the root canal while reducing ledging and canal transportation. Refinements have followed, with changes in metal alloy formulae, surface treatment, non-cutting tip designs, and improved manufacturing precision, all leading to fewer operational errors. Unfortunately, despite all the design improvements, NiTi rotary files still have significant limitations. Studies using digital subtraction micro-CT analyses as well as microbiologic and histologic assessments have revealed our inability to treat the true cross-sectional shape of all but the most round root canals.1-5 Dentistry has been limited with rotary files and current irrigation methods in its ability to remove a significant amount of bacterial contamination, bacterial endotoxins, and pulp tissue remnants, thus preventing 3D obturation of root canal systems. In addition, unexpected instrument breakage continues to challenge even the most seasoned clinician, potentially adversely affecting the treatment outcome.

Successful endodontic treatment depends on thorough cleaning, shaping, and obturation of the root canal system. Traditionally, it was believed that instrumentation of the canal to at least three ISO sizes larger than the first file to bind at the apical third would remove the infected inner layer of dentin and allow the irrigant to reach the entire length of the canal. Many teeth present more of a challenge to traditional endodontic treatment because of their asymmetric canal anatomy. Premolars, mandibular incisors, cuspids, and the distal roots of molars are often oval, flat, and/or teardrop shaped, making chemo-mechanical removal of tissue debris and infected dentin even more challenging. Until the recent introduction of an innovative "adaptive" instrument technology, the basic tenets of endodontic treatment have been difficult to achieve.

In addition to the limitations of mechanical rotary-driven shaping, dentists have also been limited by the efficacy of endodontic irrigation. Up to now, rotary shaping has been interspersed with sequential irrigation, which only briefly exposes canal tissue remnants and bacterial flora to a fresh supply of irrigant. In a recent study by Peters et al,2 canals of maxillary molars prepared with rotary instrumentation consistently revealed inadequate cleaning and shaping, with an average of 43% (mesio–buccal roots) and 33% (disto–buccal roots) of the remaining canal space being untouched during instrumentation. In a corroborating investigation, Metzger et al,6 found that traditional rotary file instrumentation left 60% of the canal walls unaffected with a corresponding 45% of the canal walls untouched by obturation.

Curved canals are a greater challenge to conventional chemo-mechanical canal preparation. Smaller-sized NiTi rotary files are partially able to clean and shape the apical one third of the root canal; however, as greater taper and more rigid instruments are used, more dentin is removed on the outer side of the curve. Apical transportation ("zipping") may also be a sequelae, which, left unrepaired, leads to untreated apical areas of the root canal system. Excessive canal shaping of curved roots can lead to thinning of the canal walls, lateral root perforations, and a potential risk of future root fracture.

Canals are seldom round in cross-section, rather they are often oval or teardrop-shaped. Unfortunately, a standard 2D radiographic image does not demonstrate these 3D irregularities. As visualized using micro-CT analysis, (Figure 1) the bucco–lingual view of this mandibular premolar demonstrates seemingly excellent cleaning and shaping of the canal using conventional rotary-driven instrumentation. But upon further analysis, when rotating the tooth 90° on its axis to visualize the mesio–distal dimension (Figure 2), a clearer depiction of the inadequate cleaning and shaping becomes more evident. These are the areas unseen by standard 2D radiography. With the advent of laboratory micro-CT scans and the clinical use of cone-beam computed tomographic (CBCT) systems in the dental office, we have a better appreciation of the necessity for more precise and thorough canal cleaning and shaping (Figure 3, Figure 4 , Figure 5, Figure 6 and Figure 7) and the necessity for an endodontic instrument which would "self-adapt" to canal irregularities without the excessive removal of healthy tooth structure.

In the author's opinion, the recently introduced self-adjusting file system (SAF Endo System, ENDOVATIONS/Henry Schein, Inc, www.endovations.com) dramatically improves the efficacy of root canal instrumentation and disinfection. This novel design not only cleans irregularly shaped canals with just one instrument after a glide path of 20/.04 taper is achieved, but also passively and simultaneously supplies an irrigation solution to the entire length of the canal during the shaping process. The SAF instrument is a compressible, thin-walled lattice made from a hollow nickel titanium cylinder, measuring 1.5 mm in diameter (Figure 8), and is available in three lengths. When the SAF instrument is inserted into the root canal, it uniquely compresses to a size 20/.04 taper.

The SAF instrument is attached to a specially designed handpiece that oscillates the instrument up-and-down within the canal 5,000 times per minute with an amplitude of 0.40 mm; it is this movement that cleans and shapes the inner dentin layer as it "sandpapers" the walls of the canal. There is no rotational movement used to shape the canal. Because of the inherent memory characteristics lattice structure, the SAF instrument has the natural ability to radially expand within the canal, adapting to the shape of the original canal morphology. The canal space and inner dentin are subsequently cleaned and shaped conservatively in three dimensions, thus preserving the natural cross-sectional shape of the canal (Figure 9).

The SAF instrument is intended to be used with a continuous gentle up-and-down "hand-pecking" motion of 3 mm to 5 mm. To enhance the shaping and disinfection of the canal space, the SAF instrument incorporates an irrigation source, the VATEA irrigation system (Figure 10), to provide a constant flow of irrigant, allowing simultaneous irrigation and disinfection of the canal space during the entire cleaning and shaping process. Studies have shown that the irrigant will not pass through the apical terminus of the canal during instrumentation.7,8 A note of caution: the use of the SAF is not recommended in canals with immature apices or if there is a root perforation.

The ultimate microbiological goal of chemo-mechanical preparation is to completely eradicate intracanal bacterial populations and their endotoxins, or at least reduce them to levels that are compatible with peri-radicular tissue healing. Bacteria persisting after chemo-mechanical procedures at levels detectable by culture-dependent techniques have been shown to negatively influence endodontic treatment outcomes.9 Therefore, efforts should always be directed toward cleaning/shaping strategies that maximize root canal disinfection before obturation. Unfortunately, anatomic complexities in the root canal system often present physical constraints that pose serious challenges to adequate root canal disinfection.

Siqueira et al,5 after the main canal spaces were contaminated with E faecalis, analyzed an in vitro study of 44 single-rooted teeth with oval root canals. After cleaning and shaping using rotary files with syringe irrigation, the resulting canals had an incidence of 55% positive bacterial cultures, whereas the canals cleaned and shaped with the SAF System had only 20% positive canal cultures (Graph 1).

Infected dentin, soft tissue, and bacterial biofilm can cover an enormous portion of the inner surface of the root canal system and their removal can challenge even the most assiduous cleaning and disinfection protocol.10 It has been well documented that the assessment of canal morphology11 and the true extent of tissue removal and quality of obturation cannot be accomplished by evaluation of 2D bucco–lingual radiographic projections. Oval and flat-shaped canals occur in approximately 25% of teeth.12 In a recent investigation, De-Deus et al13 histologically evaluated 12 pair-matched vital mandibular canines slated for extraction whereby the canal spaces were prepared with either the SAF System or rotary file instrumentation. Only teeth with vital pulps and oval-shaped root canals were included. The SAF System was found to reduce the amount of remaining pulp tissue by 57% compared to conventional rotary files. In addition, 21% of the rotary file prepared canals still contained pulp tissue remnants. The investigators concluded that sodium-hypochlorite irrigant, applied with a syringe and needle, failed to compensate for the inadequate cleaning by the rotary file itself (Figure 13 and Figure 14).

Root canal obturation is an essential component of root canal treatment that aims to prevent future bacterial contamination (or recontamination) of the canal space and periapical tissues. When the root canal spaces are not adequately cleaned and shaped before obturation, proper sealing will be jeopardized by the remaining tissue and debris.13,14 Any debris that prevents the adaptation of the filling material and the canal wall may provide space for bacterial leakage and proliferation. A recent study6 compared the obturation efficacy between canals cleaned and shaped with rotary files versus the SAF System, using lateral compaction of gutta-percha cemented with AH26. The results revealed the SAF System allowed as much as 83% of the canal wall to have intimate contact with the obturation material compared to only 55% after the use of rotary files.

Compared to traditional rotary file shaping which results in a round cross section, the SAF System will maintain the original cross-sectional shape of the canal; therefore, obturation of canals prepared with the SAF System may ostensibly seem to be more clinically challenging. Any of the current obturation techniques may be employed, including lateral compaction, carrier-based obturation, and warm vertical compaction. Although a glide path must be created to a 20/.04 taper prior to the use of the SAF instrument, the resulting apical shape will be close to an ISO #30 K-file. After SAF instrumentation is complete, the apical canal shape should be measured by apically gauging with hand files (again, usually a #30 file should go to full working length). Subsequently, the master cone (or carrier-based obturator) of the corresponding size is selected and cemented to working length; lateral or warm vertical compaction of the additional obturation material then continues until the canal space is completely filled (Figure 15, Figure 16, Figure 17 and Figure 18).

The SAF cleaning, shaping, and irrigation system has been proven in rigorous studies published in peer-reviewed journals to be significantly more effective than traditional rotary NiTi instrumentation.1-8 Microbiologic sampling of canals infected with E faecalis, 3D micro-CT analysis of canal surface preparation, and subsequent adaptation of root canal filling materials to the canals walls all suggest that this adaptive technology using the SAF System is clearly superior to rotary file preparation. Operational errors such as under-instrumentation, canal transportation, over-thinning of the canal walls and instrument breakage are greatly reduced or eliminated when using the SAF System. After a glide path to working length is established up to a 20/.04 taper, only one instrument is required to complete the instrumentation, while achieving simultaneous irrigation during cleaning and shaping. This innovative technology has the potential to change the way dentists perform endodontics.

Dr. Levin is a senior consultant for Endovations.