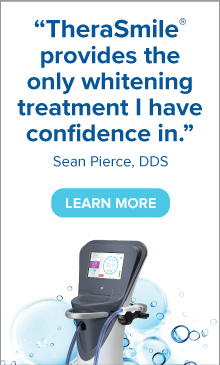 Biology and anatomy are critical factors

To understand how teeth whitening works, one must first understand not only the anatomy of teeth but also the biology of tooth color: how it is determined genetically; the parts of the tooth that are responsible for its color; and the issue of stains, both intrinsic and extrinsic, and how they affect the color of teeth. Furthermore, this article will discuss the role and chemistry of hydrogen peroxide, explain the factors that influence whitening, and assess the plethora of whitening methods currently available.

The Biology of Color

Tooth color comes from a convergence of genetics, environmental factors, and one’s ability to keep the mouth clean and healthy.

Extrinsic stains are a result of stain molecules attaching to the sticky layer of the bacterial biofilm on the tooth and are relatively easy to remove because they are on the outside of the tooth. Visits to a dental professional will determine the degree of extrinsic stains that form on the outside of a patient’s teeth. The amount of staining depends on the patient’s level of personal home care as well as lifestyle and diet. The hygienist can scrape away the calculus and plaque that a toothbrush cannot remove and teach the patient about proper home care and its importance, which can eliminate the basis of stains. These discolorations are caused when stains on the enamel penetrate into the enamel matrix (Figure 1).

Intrinsic stains are more difficult to remove, for they lie within the dentin of the tooth.1 These stains are not caused by the foods an individual eats; instead, they are a result of genetics, aging, trauma, medications, environment, and systemic conditions.

The most common change in tooth color is a result of aging. As teeth grow older, the pulp shrinks, and the dentin becomes thicker, which also causes teeth to yellow, due to increased color from the dentin.2 Medications taken during tooth formation can also cause enamel defects, which make teeth look stained. Tetracycline, used to treat bacterial infections, can cause permanent staining of the teeth, as the tetracycline molecule is deposited within the dentinal structure.3

A tooth is a semipermeable membrane that allows bleaching agents such as peroxide to penetrate dentinal structures within 15 minutes.4 Whitening products contain an active ingredient of either hydrogen peroxide or carbamide peroxide. Hydrogen peroxide breaks down into water and peroxide radicals (oxygen ions), also known as whitening molecules, as it is absorbed into the tooth (Figure 2). These radicals have unstable electrons that seek to bond to unsaturated double bonds, and these bonds usually have a yellow pigment. Free radicals react with the double carbon bonds that hold chromophores in stain molecules, breaking them down into single carbon bonds.

While double carbon bonds are responsible for the yellow color in stains because they absorb light, single carbon bonds reflect light, making the teeth appear whiter and brighter as the stain molecules become vaporized. At this point, the double bonds are converted into hydroxyl groups, which are similar to alcohol and usually colorless. Because of hydrogen peroxide’s instability, it can break down during the time that elapses between its manufacture, transport, and use on the patient, both in the office and during take-home use. Hydrogen peroxide, therefore, needs to be manufactured in a stable formula and/or kept in a hermetically sealed system to prevent decomposition.

When hydrogen peroxide is stored and shipped, an acidic pH must be maintained to extend shelf life, but the optimal pH for hydrogen peroxide to have its oxidation effect is 9.5 to 10.8. This range produces a 50% greater result in the same amount of time as a lower pH, so it is best to raise the pH from the ideal storage and shipping range to the ideal whitening range. The dual-barrel syringe used in professional whitening allows for the reactive hydrogen peroxide and a pH raiser to be delivered at the time of extrusion. This results in more effective whitening because the whitening molecules created in a higher pH environment yield the very active perhydroxyl molecule and fewer of the less active negative oxygen ions.6

Temperature accelerates the reaction rate, leading to a quicker whitening session. For every 10°C the temperature increases, the rate of the chemical reaction is doubled. This is the basic kinetics of a reaction rate. The temperature can also cause sensitivity and a reversible pulpitis in patients if it is too high (more than 53°C or 128°F). If the exposure time is short and below this temperature and the patient is comfortable, then it is in a safe range.7,8

When oxidation takes place within a sealed environment, as with a dentist-administered tray and gel, the efficacy of bleaching is increased by preventing the oxygen ions from escaping from the tooth surface and into the atmosphere.9 This closed system keeps the peroxidases (the enzymes in saliva that break down free radicals) from getting into the whitening gel and reacting with the free radical whitening molecules, preventing the whitening oxygens from escaping into the open air.

Finally, new hydrogen peroxide formulations have a more stable chemistry, known as peroxydone, and have improved the adhesive qualities of gels, which bind the hydrogen peroxide to the surface of the tooth. This improves the contact time of the active ingredients and lowers the likelihood of sensitivity, as the gel stays on the tooth and away from the soft tissue. For at-home whitening, the peroxydone allows the user to apply the whitening gel directly to the teeth without drying out and irritating the soft tissue. Polyethylene strips use this technology by allowing the user to target the whitening gel to the tooth.

The American Dental Association (ADA) has identified four types of teeth-whitening treatments: in-office, take-home, over-the-counter (OTC), and other. Both in-office and take-home treatments are professionally backed, with a dentist conducting an in-office examination and performing a chairside whitening treatment before dispensing the take-home kit to the patient.

In-office whitening usually offers hydrogen peroxide at a higher concentration (up to 35%) and activates the solution by heat from laser or light energy. The process requires a barrier for tissue isolation, usually gauze for the lips and upper gums and a cured barrier for the gingiva. It offers the quickest results, with several shade changes within the hour.

The professional whitening lights that sit outside the mouth usually require three or four 16-minute sessions, creating a high degree of heat (over 67°C), causing a quick increase of intrapulpal pressure, ie, the zingers (Figure 4). The energy from lights has been shown to create increased free radical production and greater uptake, and the heat accelerates the reaction rate of hydrogen peroxide.

The professional take-home kits with custom whitening trays (25-year-old technology) have a lower chemical concentration of either carbamide peroxide or hydrogen peroxide gel, which is placed into custom-fitting trays and worn at night (for a longer wear time) or during the day (for a shorter wear time). Take-home kits may yield the same results as in-office treatment but over a longer period of time, greatly increasing exposure time to the teeth as well as the soft tissue. This prolonged exposure causes greater sensitivity.

OTC whitening treatments are available nearly everywhere. They can even be purchased by the consumer without a dental examination, meaning there is no professional oversight of the process and extrinsic stains are not removed beforehand. These treatments come in strips, wraps, boil-and-bite trays, and paint-on form, and they are inconsistent, with no customization of the whitening regimen. Because many OTC products have not gone through the rigorous testing seen with professionally dispensed products, some overstate their effectiveness, and many are under scrutiny for their lack of safety and supervision.

Used together, in-office and take-home kits are called “dual whitening,” and the combination is easily the quickest, safest, and most effective way to whiten.10 Done alone, the effects of in-office whitening will regress in as few as 7 days, while at-home kits provide no jump-start to the whitening process. In addition, the teeth and gums are exposed to the carbamide or combination hydrogen peroxide gel for long periods with stand-alone take-home kits, increasing the likelihood of sensitivity.

Not all whitening methods or products are created equally. In order to select a whitening strategy best suited for patients’ needs, it is important to explore all the possible options and understand the whitening process. Innovative manufacturers are working to combine all of the positive factors of whitening while eliminating the compromises that cause sensitivity. Ideal whitening products combine the technology of heat and light in a closed system. The presence of the lights facilitates increased free radical production, while the heat speeds up the reaction rate of hydrogen peroxide. Furthermore, a closed system mouthpiece prevents the whitening oxygens from escaping into the atmosphere. Instead, they bombard the tooth surface and whiten more efficiently. This closed system, in conjunction with take-home kits—termed “dual whitening”—is the whitening method that delivers the safest, fastest, and most satisfying results.

The author would like to thank Rachel O’Connor for her assistance with this manuscript. 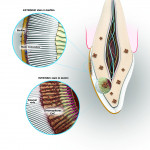