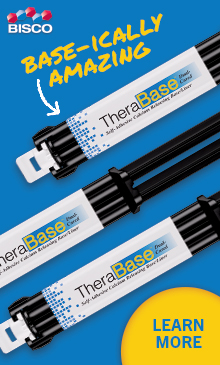 Upon completion of caries removal and tooth preparation, it is extremely beneficial to begin the adhesive bonding of dentin before an impression is taken. The advantages of this procedure are numerous,1-6 and include benefits such as the reduction or elimination of postoperative sensitivity by sealing dentin tubules, because sealing stops the hydrodynamic source of pulpal pain by limiting the movement of pulpal fluid in the dentinal tubules. It also decreases the chance for bacteria to invade the sealed dentinal tubules. Sealing out bacteria reduces instances of inflammatory irritation or death of the pulp. Lastly, it can increase the strength of the dentin bond by allowing the dentin bonding system (DBS) the necessary time to more fully polymerize (90% to 95% of the reaction happens between 5 minutes and 30 minutes).

Using a self-etch DBS such as Brush&Bond® (Parkell Inc., www.parkell.com) to perform immediate dentin sealing has several advantages. First, smear plugs remain in the orifices of the dentinal tubules, reducing the amount of dentinal fluid that can dilute or penetrate the DBS while it is maturing. This increases bond strength and integrity. A second advantage is that matrix metalloproteinases (MMPs) are not activated by higher pH (> 2) primers such as Brush&Bond (pH 2.5). A total-etch DBS with a lower pH (< 0.5) increases the activation of MMPs, which will degrade the collagen in the hybrid layer. The lower the MMP activity, the greater the durability of the adhesive bond.1-6

Dispense up to 3 drops of Brush&Bond. The mixture contains water, acetone, 4-methacryloyloxyethyl trimellitate, polyfunctional acrylate, monomethacrylate, and photoinitiators. Activate by stirring the bonding liquid with the special Brush&Bond brush, which contains the p-toluene sulfonate salt and amine needed to activate the liquid bond.

Apply without agitation, keeping the preparation surface wet with the activated Brush&Bond liquid for 20 seconds. Dry for 10 seconds, allowing the solvents to evaporate. Strict observance of the prescribed length of time is extremely important. If the process is cut short, too much water and acetone will remain in the adhesive, which will greatly decrease the bond strength.

After air-drying, light-cure for 10 to 20 seconds. Be sure the light is producing 450 to 600 mW/cm2 of energy. Next, cover the bonded dentin with 0.5 mm of microfilled flowable composite to block undercuts and or irregularities. Then cover the adhesive/flowable-coated preparation with glycerin and light-cure for an additional 10 to 20 seconds. This will polymerize the air-inhibited layer on the adhesive layer, allowing it to retain its thickness.

Finally, make an impression with polyvinyl siloxane or reversible hydrocolloid. Note that polyether impression materials can adhere to the pre-bonded surfaces.

Next, coat the preparation with another coat of Brush&Bond adhesive. After 20 seconds, air-dry and light-cure the adhesive.

Seat the restoration onto the preparation. Remove excess cement before the initial setting. Wait 4 minutes to allow the polymerization of the dual-cure adhesive and cement to reach maturation without photo-initiation, then light-cure through the restoration if it is made entirely of composite or ceramic.

A woman in her mid 50s wanted to replace an older amalgam restoration with a more esthetic looking restoration (Figure 1). The tooth was asymptomatic and tested positive for vitality. Because of the isthmus width of the amalgam restoration and a peripheral rim fracture at the mesial marginal ridge, the tooth was diagnosed as being at a high risk for fracture. The patient was proactive in treating the tooth to prevent additional breakdown.

Once the amalgam was removed, dentinal cracks were found both buccally and lingually (Figure 2). After establishing a caries removal endpoint with caries-detecting dye and DIAGNOdent® (KaVo Dental, www.kavousa.com), the internal line angles were rounded out with a small round diamond bur and both the buccal and lingual dentinal cracks were removed completely (Figure 3, Figure 4, Figure 5 and Figure 6).

The preparation was treated with chlorhexidine to inactivate the MMPs and was then sealed with Brush&Bond (Figure 7 and Figure 8). The preparation was subsequently resin-coated with microfilled flowable to create a secure bond. The bond was allowed to mature for 5 minutes after initial polymerization before thin horizontal layers of microhybrid composite were placed. A fiber weave was placed in the uncured layers of composite to decrease the effect of C-factor stresses during polymerization and to create a failsafe before the inlay was fabricated. The preparation was cured.

The inlay was fabricated using a same-day semi-direct technique. The inlay and preparation were air-abraded with a 37% phosphoric acid-etch used to clean the composite and etch the enamel (Figure 9). The preparation was rinsed and air-dried before adhesive was placed on both the preparation and the inlay. The inlay was cemented with heated composite. Flash was removed with an explorer and dental floss. The restoration was then light-cured buccally, lingually, and occlusally. Occlusion was adjusted and the restoration was polished.

The patient was very pleased with the function and esthetics of the restoration (Figure 10). In addition, there was no reported postoperative sensitivity or pain on biting.

Dr. Alleman has received honoraria from AEGIS Communications, the publishers of Inside Dentistry, for writing this article.