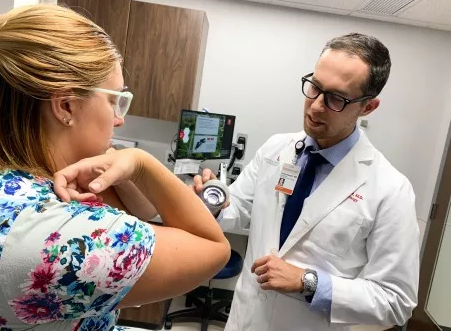 A new study by researchers at The Ohio State University Wexner Medical Center is giving insight into certain lifestyle choices that may prevent or improve psoriasis, helping experts better understand what triggers the disease.

Dental health and diet may have an impact on the development and severity of psoriasis, according to a study by dermatologists at The Ohio State University Wexner Medical Center. Psoriasis is a skin disease that causes thick, itchy patches of red skin with silvery scales and affects more than 8 million Americans.

“Psoriasis is an autoimmune disease so although it often presents as red, scaly patches on the skin, we know that the causes and consequences are more than skin deep,” said Dr. Benjamin Kaffenberger, a dermatologist at the Ohio State Wexner Medical Center who led the study.

Psoriasis, which can last a lifetime, is caused by a problem with the immune system. In a process called cell turnover, skin cells that grow deep in the skin rise to the surface. Normally this takes a month but with psoriasis, it happens in just a few days because the cells rise too quickly. Treatments include creams, medicines and ultraviolet light therapy.

“We’re looking for some sort of trigger that sets off the immune system. Because strep throat is one of the known triggers and the microbiome of bacteria in the mouth is much more complex, that became our starting point,” said Kaffenberger, who is also an associate professor in Ohio State's College of Medicine. “We wondered if poor dental health could be a risk factor for psoriasis.”

Researchers created a specially designed lifestyle and diet questionnaire that was administered to 265 patients at Ohio State’s dermatology clinics. The study surveyed 100 patients with psoriasis and 165 without the disease. The study showed poor dental and oral health, in particular gum pain, was associated with those who had psoriasis.

“Patients who had more severe psoriasis were more likely to report that their gums were in worse condition than patients who didn’t have mild to moderate psoriasis in the first place,” Kaffenberger said. “And patients who had higher fruit consumption reported less significant psoriasis, indicating fruit and potentially fresh foods may be an associated protective factor.”

The study also reinforced data from previous studies that found family history of psoriasis, smoking and obesity were significant predictors of psoriasis.

“Psoriasis is a chronic disease and can be so severe that it covers the entire body. Patients ask us ‘If I change my diet, will I get rid of this disease?’ That’s what really drove the onset of this study – to see what health and lifestyle changes patients could make,” Kaffenberger said. “The key is to protect your gums and your mouth by brushing your teeth twice a day and flossing. Lifestyle changes include quitting smoking, avoiding high alcohol consumption and properly managing diabetes.”