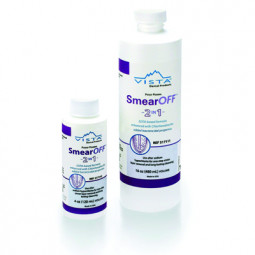 Vista Dental Products introduces the patent pending EDTA based formula called SmearOFF™, which not only effectively removes the smear layer, but also kills bacteria in one easy step.

Vista’s SmearOFF™ formula is enhanced with Chlorhexidine, and unlike other mixes, is compatible with Sodium Hypochlorite; eliminating steps and saving time with each procedure.