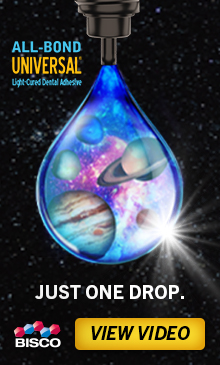 For the past 20 years, Mike DiTolla, DDS, has had a successful career contracting with manufacturers and lecturing about dentistry across the country, but when the COVID-19 pandemic hit and the lecture circuit shut down, he found himself unexpectedly called back to private practice. "Right before COVID, things were just humming along. Lots of live lectures were being held, and I was filming lots of Product Talk episodes for Inside Dentistry and flying all over the place," he says. "But then with the shutdown, no one really knew what to do, and it took a while before we started doing virtual meetings." DiTolla soon realized that he missed being around people. "It surprised me a little bit because every time I was around people before the pandemic, I couldn't wait to get away," he says. "But I realized that I really missed going into an office. Being at home and not being around people was slowly but surely weighing me down." With consulting contracts still up in the air, DiTolla decided to start looking for a dental practice to buy. "I just thought, ‘you know what I might enjoy and would make me more valuable as a consultant? Actually having a dental practice again,'" he says.

Returning to private practice after a 20-year break presented its own set of challenges. "I remembered all the fun parts about being in practice, but I'd forgotten about some of the tough stuff and all the things that can go wrong, like that nagging feeling when a crown doesn't fit right or you feel like you've disappointed a patient," DiTolla explains. "Initially, it was a challenge to deliver predictable esthetic results that I could be proud of." Thankfully, during the time that DiTolla had been away from practice, materials and technology were evolving at a rapid pace. "While I was consulting, I had mostly only been doing crowns and bridges, so I had essentially taken a 20-year-long break from doing composites," he says. "I felt like my composite game was a little bit off, but Kulzer's new Venus® Bulk Flow ONE became a life saver for me."

Venus Bulk Flow ONE is the first flowable one-shade bulk-filling composite that can adapt to any tooth shade from A1 to D4 and does not need an additional capping layer. With its adaptive shade matching technology, Venus Bulk Flow ONE saves clinicians the time that they would spend choosing a composite shade, and because it picks up the shade from the surrounding tooth structure, it will match any future changes to a patient's tooth shade that occur as a result of staining or whitening. Although DiTolla acknowledges that there are still some cases that may require a more traditional composite approach, such as those involving wider preparations that are deeper than 4 mm or cusp replacements where there is insufficient surrounding tooth structure, he has found that when indicated, Venus Bulk Flow ONE is able to match the tooth shade much better than he can by sight. "A truly great product takes the set of skills that you already have and gives you a better result," he says, "and that is what Venus Bulk Flow ONE did for me."

DiTolla particularly appreciates how the material handles. It combines the self-leveling effect of a flowable with the 4-mm curing depth of a bulk-fill. "The handling of Venus Bulk Flow ONE is amazing," he says. "We've been able to use it as a sealant, and everywhere that it is applied, it holds its shape and stays in place." Venus Bulk Flow ONE also has a radiopacity of 300% aluminum equivalent, so it is easy to see on radiographs, and its flexural strength of 120 MPa is 50% higher than the ISO minimum of 80 MPa for posterior composites. "It has a high resistance to wear to handle the kind of chewing loads that we see in the posterior region, and it has a low shrinkage stress of 7.2 MPa," DiTolla says. "It's wonderful to have a bulk-fill flowable that is strong enough to not require a capping layer."

Now that DiTolla has been back in private practice for close to a year and a half, working 3 to 4 days a week depending on his lecture schedule, his current focus is on growing the practice. One challenge that he hadn't anticipated was navigating a return to preferred provider organization (PPO) status and having to deal with the constraints of insurance company fees. He found that although some procedures, such as crowns, were becoming more affordable for PPO practices, direct composites were not. "As a general practitioner, you can't just refer out posterior composites," he says. "There's no one to refer them out to! So, I had to find a way to make these restorations somewhat profitable without having to cut corners." Venus Bulk Flow ONE helps DiTolla keep his costs down by eliminating time spent on setting up the tray, selecting shades, or correcting shades that were not initially matched well. It also cuts down on the cost associated with keeping a large inventory of rarely used shades that often expire and go to waste. "Venus Bulk Flow ONE's combination of characteristics enables me to place strong and esthetic restorations while remaining profitable," he says.

Because Venus Bulk Flow ONE demonstrates high fluorescence, DiTolla discovered that it is also a great material to use for attachments in clear aligner cases. "We use it to place specifically shaped geometric attachments with bevels in order to rotate or extrude teeth," he explains. "The translucent shade-matching effect allows the color of the teeth to come through, so you can't see the attachments. Furthermore, the material's fluorescence allows us to use a black light to identify the attachments to make sure that they are clean and will fit correctly with the aligner tray to facilitate the predicted tooth movement."

Venus Bulk Flow ONE is not the first innovative product from Kulzer that DiTolla has used, and he's certain that it won't be the last. "My first exposure to Kulzer was with Durafill® VS way back in the day when we were using microfills for everything, and that was our go-to anterior composite because of its polishability and esthetics," he says. Next, the introduction of the Venus line of materials offered versatility with Diamond and Pearl, which provide a firmer or creamier consistency, depending on the clinician's preference. "Some clinicians like a firmer composite that feels a little more like amalgam that they can really sculpt, whereas others prefer something that is less filled and has a creamier feel so they can shape and then have a little working time to go back and shape again," DiTolla says. Kulzer then introduced their single-shade technology with Venus® Diamond/Pearl ONE before further developing it into Venus Bulk Flow ONE for bulk-fill applications. "Venus Bulk Flow ONE really showcases Kulzer's outside-of-the-box thinking and the hard work that its R&D team has being putting into the materials," he says. "I really believe that single-shade technology is the future of composites, and we're just seeing the first versions of it. It may seem like a novelty, but it is what we are all going to end up using in the future."

• With the incredible shade-matching properties of Venus Bulk Flow ONE, the restoration blends into the surrounding dentition.

• Cavities are filled quickly and easily with increments of up to 4 mm without the need for an additional capping layer.

• Low shrinkage stress, high flexural strength, and high wear resistance that can withstand the high loads in the posterior region.

• Both the ONE-shade effect and the bulk filling properties shorten chair time, making it ideal for the restoration of primary teeth.