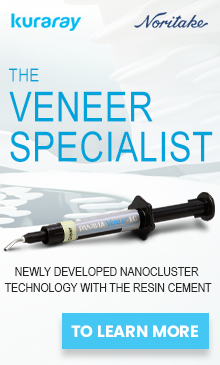 When a patient presents with a dislodged anterior crown and endodontic post, he or she is likely to want an immediate fix to fill the gaping hole. After careful evaluation of the remaining tooth structure, extraction and implant placement may prove to be the ideal definitive treatment; however, the patient's immediate esthetic concerns should be resolved prior to consideration of a more complex restorative procedure. Clinicians should begin by evaluating the success of the previous endodontic procedure and the possibility of re-treating the tooth.

The following case report demonstrates a precise method for readapting an existing crown onto a tooth preparation with an inadequate circumferential ferrule. Retrofitting and cementing the existing crown allowed the patient to continue with her busy schedule. The conservative same-day solution provided represents an interesting alternative to conventional methods that involve more appointments and increased cost. Although recementing the existing crown in a safe and effective way allowed the clinician to immediately restore function, comfort, and esthetics to the damaged teeth, this was a temporary esthetic measure that was completed to facilitate further treatment planning, not a definitive treatment.

A distressed 40-year-old female patient presented to the practice with an urgent esthetic problem. The patient's chief complaint was that a post-retained crown on tooth No. 7 had failed and become dislodged (Figure 1 and Figure 2). If possible, she wanted to have the problem fixed on the same day because she had to fly out of town for a wedding on the following day.

During the clinical examination, the dislodged crown and prefabricated metal post were thoroughly evaluated along with the damaged tooth structure (Figure 3). Although the crown was in good condition, the length of the post was shorter than the height of the crown, which has been correlated with a high rate of failure.

Prefabricated metal posts have been widely yet incorrectly recommended for use in the presence of extensive tissue loss, not only to retain the crown but also to recover the stiffness of the tooth.1 Contrary to this belief, it has largely been proven that, instead of reinforcing teeth, posts actually contribute to their weakness.2 Debonding is the most common type of failure when using metal posts, and it is generally agreed that achieving stable adhesion to intraradicular dentin is more challenging than achieving stable adhesion to coronal dentin.3,4

Prefabricated metal posts pose an esthetic challenge that is similar to that of custom cast posts. A metal post alters the transmission of light through the tooth and may show through the root.5 In addition, metal posts are likely to induce root fracture.6 Compromised post-retained restorations often fail because of fatigue and constant functional stress and torque; however, when a significant portion of the crown is missing because of caries or the fracture of an existing restoration, there may be a need to use a post to provide additional retention for the crown.7

As part of the clinical examination, a radiographic evaluation of the previously performed root canal treatment revealed that the canal was intact and that there was no evidence of infection. Therefore, the decision was made to recement the existing crown using a new post. First, the prefabricated metal post was removed from the crown, and an access opening was made to the palatal aspect in order to facilitate the insertion of a fiber-reinforced composite post through the body of the crown (Figure 4). A fiber post was selected because of the advantages that fiber posts have demonstrated when compared with conventional metal posts in clinical trials, which have led to their widespread acceptance.8 Fiber posts offer an opportunity to facilitate better patient care, expand treatment options, and respect tooth structure. Fiber posts are more esthetic than metal posts and can improve procedural efficiency because they are bonded into place with a minimally invasive protocol. In addition, the micromechanical retention provided by fiber posts is superior to macromechanical retention, corrosion is not an issue, and fiber posts are more fatigue-resistant and can be radiopaque.9

For this case, a tapered fiber post (Rely X Fiber Post, 3M) was selected.10 This type of post is preferable to a parallel fiber post because those usually require the removal of healthy radicular dentin to create sharper internal angles, which may result in a weakened root and a higher risk of fracture.11

The restorative protocol would involve simultaneously bonding the crown and the fiber post. After placement of retraction cord (UltraPak™, Ultradent Products, Inc.), a modified slit rubber dam technique was employed, and the preparation's depth and the width of the canal were increased through the removal of gutta percha (Figure 5). No additional dentin should be removed beyond what is necessary.12

After the crown and the inserted post were both tried in to evaluate their fit (Figure 6), every surface was microetched (MicroEtcher™, Zest Dental Solutions) with 35 µm abrasive powder (Crystal Air, Crystalmark Dental Systems Inc) to increase bond strength.13 Using long microbrushes, the canal was cleaned with 70% ethanol to remove any eugenol from the dentin.14 A 2% chlorhexidine digluconate antibacterial agent (Cavity Cleanser™, BISCO, Inc) was then used to remove any remaining bacteria.15 One study that evaluated the effect of 2% chlorhexidine pretreatment noted that it resulted in significantly higher bond strength values.16 Once cleaned, the surfaces were then rinsed and dried using paper points (Figure 7). A 35% phosphoric acid etchant (Select HV® Etch w/BAC, BISCO, Inc) was applied with long microbrushes and agitated for 15 seconds to work it into the dentin. After application, it was thoroughly rinsed away with water using an endodontic irrigation syringe, and the dentin was thoroughly dried with an air syringe and paper points. It is important to avoid excessively wet surfaces because moisture may negatively impact effective dentin bonding.17 Bond strength degradation was further avoided by applying an antibacterial wetting agent (MicroPrime™ G, Zest Dental Solutions) with long microapplicators for 30 seconds.18 Paper points were then used to eliminate excess. Some authors speculate that enzymatic activities can occur within incomplete resin-infiltrated subsurface regions of hybrid layers that are created by contemporary adhesive systems.19

Use of a three-step, etch-and-rinse technique with a dual-cure composite resin cement is recommended when bonding a fiber post-retained crown.4 First, multiple layers of primer were applied and agitated to facilitate deeper penetration into the dentin. The primer was allowed to dry for 40 seconds while the solvent evaporated. Paper points were then used to eliminate any excess primer, and any remaining solvent was allowed to evaporate from the dentin surface.20 After priming, a thin layer of adhesive agent was applied to the preparation.

To prepare the restoration, the intaglio of the crown was etched with 5% hydrofluoric acid (IPS® Ceramic Etching Gel, Ivoclar Vivadent) for 20 seconds. After cleaning with phosphoric acid, washing, and drying, a thin layer of a two-part silane coupling agent (Bis-Silane™, BISCO, Inc) was applied and dried with warm air for 60 seconds. The crown was then placed in an oven at 250°F for 3 minutes. Once cooled, a thin layer of warmed composite resin was placed into the crown, which was then settled onto the preparation. Because preheating resin can reduce viscosity and enhance subsequent surface hardness, these effects may result in easier placement with an increased degree of polymerization and depth-of-cure.21

Non-treated fiber posts have a relatively smooth surface, which limits mechanical interlocking with resin cements. Therefore, they should be silica blasted22 (CoJet™ System, 3M). Silica blasting improves bond strength between fiber posts and resin cements when compared with phosphoric acid or hydrofluoric acid etching.23 After the post was blasted, a thin layer of silane was applied and left undisturbed for 1 minute, then the surface was dried with warm air. Goracci and colleagues reported an improvement in bond strength between silanated fiber posts and flowable composite cores.24 This is a clinically feasible chairside procedure to overcome some of the problems related to silane composition and/or application.25

Once the post was dry, a thin layer of an adhesive agent was placed, and warm composite resin was adapted to reline it. The post was inserted into the root canal through the crown, removed, and reinserted again to create an anatomic post. This procedure minimizes the volume of dual-cure resin cement, resulting in minimal contraction and providing anti-rotational stability. Grande and colleagues have described a chairside technique of adapting fiber posts to ovoid canals by, in essence, remodeling them.26 However, only a composite material structured with programmable mechanical properties would be capable of producing both high mechanical performance and a modulus of elasticity adapted to dentin values.

Next, a dual-cure composite luting cement (DUO-LINK™, BISCO, Inc) was injected into the canal with a dental syringe (C-R® Syringes, Centrix Dental) from the bottom up to avoid air entrapment, create porosity,27 and help increase the chemical bond strength to the root canal walls. Research suggests that a total-etch adhesive combined with a dual-cure composite cement is the best choice for this step.28,29

The anatomic post was fully inserted (Figure 8 and Figure 9), and afterward, it was extremely important to stabilize the core. When restoring crown-less teeth, it is advisable to use a large-diameter fiber post.30 Glycerin was placed on every surface to prevent an oxygen inhibiting layer while also ensuring total polymerization of the composite resin cement.31 The dual-cure resin cement and the composite resin were then adequately light cured from all surfaces and through the light-conductive fiber post (VALO™, Ultradent Products, Inc). A failure mode analysis suggested that superior cement curing occurred when translucent fiber posts with the ability to transmit light were used.32

After curing, the excess post and any excess restorative composite material were removed (Figure 10). The rubber dam was removed, the occlusion was inspected in all centric and eccentric movements, and any premature contacts were removed (Figure 11). The restoration was contoured, and intraoral polishing paste (DiaShine Polishing Compound®, VH Technologies Ltd) was used to develop a higher surface luster (Figure 12 and Figure 13). In order to achieve complete setting of the dual-cure resin cement, the patient was instructed to eat a soft diet for 24 hours. If this treatment is provided to patients who demonstrate bruxism or are potential bruxers, a night guard should be provided.33

Several months later, the patient returned for an evaluation of the restoration and to discuss the possible placement of an implant. After a radiographic evaluation and a thorough visual inspection, the crown and fiber post were found to be in excellent condition both functionally and esthetically. As a result, the patient decided to postpone implant placement and keep the existing crown under observation with quarterly visits.

The restoration of teeth utilizing composites still presents myriad clinical challenges for the clinician, such as the potential for debonding or fractures. This is especially true for extensively broken down teeth as well as those that have been endodontically treated.34

Based on experience and intensive observation, the technique described here has proved very efficient in several treated patients. Although the patient in this article was satisfied with the restoration after follow-up, this treatment is considered to be a temporary functional and esthetic measure that is completed to facilitate further treatment planning and does not represent definitive treatment. In the past, bondable woven fiber ribbons (eg, Ribbond®, Ribbond) have also been successfully used to treat similar clinical problems without the use of a metal post.37,38 Oral healthcare providers should always be looking for the best treatment modalities for patients.39 The primary goal of a restorative treatment should be to immediately restore function, comfort, and esthetics to damaged teeth.

4. Dietschi D, Duc O, Krejci I, Sadan A. Biomechanical considerations for the restoration of endodontically treated teeth: a systematic review of the literature, part II (evaluation of fatigue behavior, interfaces, and in vivo studies). Quintessence Int. 2008;39(2):117-129.