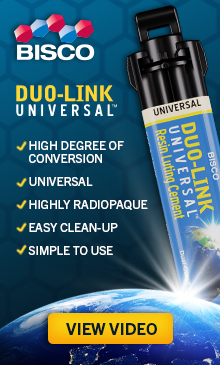 Getting the most out of your materials

The use of amalgam restorations has steadily declined over the years, but composite resin placement has doubled or, at some ages, tripled from 1992-2007.1 The annual failure rate of posterior resin composite restoration is 1.8% at 5 years and 2.4% at 10 years of service.2 The main cause of failure is related to marginal leakage, which eventually leads to marginal discoloration, secondary caries, and eventual loss of the restoration.3 With the emphasis in dentistry shifting towards bonded restorations, the proper use of dental bonding agents plays a pivotal role in accomplishing that task.

Dr. Michael Buonocore’s advances in adhesive dentistry in the 1950s in using acid to etch enamel laid the groundwork for those that followed.4 The first three generations of bonding agents had bond strengths of only 2 to 15 MPa, exhibiting extensive microleakage and staining at the margins. The fourth generation comprised the first formulations that removed the smear layer, leading to greater dentin adhesion.5 Both the fourth and fifth generations of bonding agents introduced the total-etch or etch-and-rinse technique, which increased tensile bond strengths in enamel to 33 MPa and in dentin to 28 MPa.6 When using previous generations, the dentin had been dried after etching, causing the collagen fibers to collapse. Kanca’s studies in the 1990s paved the way to wet bonding techniques, showing that wet dentin possessed greater bond strengths than the dry surfaces.4 With the emergence of the sixth and seventh generations, total-etch led the way to self-etching primers and adhesives, thereby eliminating several bottles and steps (Table 1), with tensile bond strength to dentin increasing to 35 MPa.7

Bonding to enamel is easily accomplished with a gel etchant of 30% to 40% phosphoric acid, dissolving the hydroxyapatite crystals and establishing micromechanical retention.8 However, bonding to dentin has proven to be more difficult and technique sensitive. Practitioners demanded a material that was less technique sensitive with reduced application time and less postoperative sensitivity. Manufacturers responded by developing what is now classified as the universal bonding systems. They can be used with total-etch to self-etch to selective-etch techniques and exhibit similar bond strength values regardless of their application mode.9 They can be classified as “strong” (pH <1), “intermediately strong” (pH = 1.5), “mild” (pH = 2), and “ultramild” (pH ≥2.5).10

Even though universal systems say that they can be used in the self-etch mode, a more favorable approach is etch-and-rinse treatment on enamel with a mild self-etch approach, which appears to provide better long-term outcomes on dentin.11 Since the smear layer is not removed when using the self-etch mode, techniques and instruments that produce a thinner smear layer are preferred during cavity preparation. Finishing the cavity walls with extra-fine diamond burs results in thinner smear layers, which consequently may promote a better interaction between mild and ultramild self-etch adhesives.12

The Importance of Technique

Whether using total-etch or self-etching primers and adhesives, the success of the restoration is dependent on meticulous technique. To support clinical decision-making that leads to optimal outcomes, a review of factors essential to excellent technique is presented here.

Use of Additional Agents

During tooth preparation, many outside agents can adversely or positively affect the bonding procedure. Hemostatic agents are routinely used in many dental procedures. Bernades and colleagues showed that both dentin and enamel bonding are adversely affected by hemostatic agents, with the bond strength of self-etching adhesive systems affected more negatively than total-etch systems. However, a 60-second application of ethylenediaminetetraacetic acid (EDTA) or a 15-second application of phosphoric acid followed by a water spray restored the bond strength of a self-etching adhesive to dentin.13