The Oral-Systemic Link: Monsters in Your Mouth

After presenting about the link between oral and systemic health at a recent meeting in Chicago, a woman thanked me for my presentation. She told me that her husband died 2 years prior from infective endocarditis following a root canal. He was a healthy football player in his 20s. When he was sick, everyone said infective endocarditis was not possible in someone like him. She thanked me for spreading the word on how oral bacteria can lead to systemic disease and bodily harm.

Educating our patients and other health care professionals about the systemic effects of oral bacteria can help lead to greater overall wellness in others, decreased medical bills, and extended years of life. To assist in the mission of educating others, this article explores available data on the oral-systemic link. These studies provide evidence to support the correlation between diseases of the oral cavity and chronic systemic diseases. While this correlation does not necessarily imply causation, it is hard to dispute the oral-systemic connection.

The Leading Causes of Death

According to the most recent data released from the Centers for Disease Control and Prevention (CDC), heart disease is the leading cause of death in the United States. In 2010, the United States spent $108.9 billion on coronary disease alone,1 which is higher than any other condition. The second highest total US health care spend in 2010 was on oral health conditions ($102 billion), which demonstrates the impact of both heart and oral health on the health care system.

Following heart disease, chronic lower respiratory diseases, stoke, accidents, Alzheimer’s disease, and diabetes are the leading causes of death in the United States.2 With the exception of accidents, each of these causes of death can be linked to proteins, enzymes, and bacteria in the oral cavity in some way. Thus, six of the seven leading causes of death in the United States represent chronic diseases that have been associated with conditions in the oral cavity. The CDC also reported that chronic diseases account for $3 of every $4 spent on US health care. If improvements in oral health can have any benefit in reducing chronic disease, there would be a major impact in both the financial and human costs of these conditions.

In 2010, the British Medical Journal reported that patients who brush less than twice a day are at a higher risk of suffering a cardiac episode than those who brush more than twice a day.4 Poor oral hygiene is associated with higher levels of cardiovascular disease risk and low-grade inflammation, which is measured by increased levels of C-reactive protein (a protein found in the blood that rises in response to inflammation).

A recent study in mice was able to show that chronic oral infection directly accelerates atherosclerotic vascular disease.5 The results of this study provide evidence of a causal relationship between periodontal disease and cardiovascular disease. Periodontal treatment can also reduce systemic inflammation. A recent study in a random population-based sample of men and women demonstrated that improvement in periodontal health is associated with less progression in atherosclerotic vascular disease.6 Studies have also shown a reduction of C-reactive protein and improvement of heart and blood vesicle function following periodontal treatment with the dentist.7

Correlations have also been shown between pancreatic cancer and the condition of the oral cavity. In 2014, researchers at San Diego State University found that patients with pancreatic cancer have significantly higher levels of leptotrichia and campylobacter bacteria in their saliva.8 They believe this is because both the pancreas and saliva produce amylase. A test currently in development may be able to detect early changes in saliva. This test is easily conducted in the dental office and would provide the ability to detect pancreatic cancer sooner than any other method to date.

According to the American Cancer Society, the overall 5-year survival rate for all stages of pancreatic cancer combined is only 6% because it is difficult to detect, and the disease is typically already in the untreatable late stages when diagnosed.9 It’s also notable that men are at higher risk of the associations between periodontal disease and cancer than women. Men with periodontal disease are 30% more likely to develop cancers of the blood.10 They also have an increased risk for prostate cancer. Recent data has shown that men with both periodontal disease and prostate cancer have higher levels of prostate-specific antigen secretion, an enzyme that is only normally secreted in very small amounts in healthy men.10

The third leading cause of death in America is chronic lower respiratory disease. Bacteria originating in the oral cavity can cause lung infections.11 Bacteria, such as Porphyromonas gingivalis, Fusobacterium, and Aggregatibacter actinomycetemcomitans, can be aspirated into the lower airways and cause pneumonia, which can present in chronic forms.12

Although smoking is believed to be the leading cause of lower respiratory infections such as chronic obstructive pulmonary disease, periodontal disease may be a contributing factor that can worsen the condition. Since individuals with respiratory infections are known to have compromised immune systems, it is easier for the bacteria and inflammation to spread from the oral cavity to the lungs.

The greater the periodontal disease, the greater loss of lung function is observed.13 This happens by way of aspiration. As oral bacteria are inhaled into the respiratory epithelium, an infection occurs when the bacteria multiply and begin to destroy tissue if the host is unable to clear them.14

Some of these leading causes of death are interrelated systemic diseases. Stroke and heart disease have many of the same risk factors, including high blood pressure and high levels of low-density lipoprotein cholesterol, smoking, diabetes, and obesity. Those with coronary heart disease have more than twice the risk of stroke than those who do not.16 Periodontal disease may be another contributing risk factor.

A case study of Alzheimer’s disease in Japan found that the loss of more than half of adult teeth by age 50 to 60 years may correlate with a 2.6-fold increased risk of Alzheimer’s disease.17 For participants in this study, the most common cause of tooth loss was periodontal disease occurring 20 to 30 years prior to the onset of dementia. Another study of 144 participants having few or no teeth showed that the risk of dementia increased 4.3-fold.18

Evidence of a Correlative Relationship

Researchers at the University of Indiana are studying the oral-systemic link in a different way. Instead of determining the systemic impact of periodontal disease, their focus is to “harness a controlled model of oral infection,” which they call the “Experimental Gingivitis Model.” This model permits investigator control of induced infection and resolution of gingivitis, and determines a range of systemic microbial and host outcomes. These researchers are the first to demonstrate that a systemic inflammatory response under the conditions of a 21-day model and the accumulation of dental plaque in systemically healthy young adults results in endotoxemia, a known driver of atherogenesis.

In a groundbreaking study by United Concordia, 1.7 million insurance records were reviewed from 2005 to 2009.21 Members who completed treatment for gum disease plus follow-up visits were compared to those who did not. The annual medical cost savings per patient was $5,681 for members with cerebral vascular disease (stroke), $1,090 for members with coronary artery disease, $2,840 for members with diabetes ($1,477 for diabetes outpatient drug costs alone), and $2,433 for women who were pregnant (decrease in preterm birth rate). Those who had persistent oral inflammation and systemic disease, and did not treat their periodontal disease had a greater amount of medical costs. Those who did treat their gum disease saw a decrease in health care costs.

This study also found a correlation with the reduction in hospitalizations. There was a significant savings in annual medical costs and a significant reduction in annual hospitalizations in those who underwent treatment for periodontal disease versus those who did not. The annual hospitalizations were reduced by 21.2% for members with strokes, 28.6% for members with heart diseases, and 39.4% for members with diabetes. The researchers present oral health as the “key missing piece to overall health.” Periodontal therapies, including scaling and root planing, regular visits to the dentist, and impeccable oral hygiene instruction should be strongly encouraged, and are necessary to provide more complete care and overall wellness for our patients.19

What We Can Do

The concept that oral health may be the “key missing piece to overall health” has moved the author to implement three programs to improve overall patient wellness. First, it is important to do a pre-connection with the patient prior to taking them into the operatory for an exam, which includes a thorough assessment of the patient’s health history. This helps the patient recognize that their health care providers are invested in their overall health and wellness and can encourage the patient to open up about their dental wants and needs.

If this assessment reveals that the patient has any of the aforementioned chronic conditions, the author sends a letter to the patient’s physician explaining the oral-systemic link and sometimes attaches a copy of the United Concordia study listed above. A sample letter is available at the end of this article.

This communication with physicians has several benefits. First, it helps physicians start viewing dentists as referral sources. If dentists are able to screen patients for certain illnesses, it can strengthen their practices by referring patients. After educating physicians in your area about the systemic effects of periodontal disease and what to look for during diagnosis, they will refer for periodontal consultations and subsequent therapies.

The other aspect involves educating the patient on this connection. Once educated, most patients are willing to do what it takes to keep their periodontal disease under control to prevent and possibly even lessen the health care costs and complications related to their systemic conditions.

A great way to take action is to initiate an open dialogue with your hygienists and associate dentists about putting together a program that will work for the practice. It may be best to start small. What do you have to lose? Periodontal disease is treated in dental offices each day anyway. The tools, staff, and education to put effective programs in place are already available. It shows patients that providers care about their overall wellness, which in turn can also increase patient retention and referrals.

The connection between the mouth and body is undeniable. In the past, most of the evidence supporting the oral-systemic link was based on retrospective studies. Over the past year and a half, studies emerged that provide further evidence to support the oral-systemic link from different angles. Dentists can educate patients and other health care professionals about this connection and hopefully prevent more stories like the woman who lost her young husband to infective endocarditis.

Jamie Toop, DDS, graduated from Loma Linda University School of Dentistry in 2010. She now lives in Las Vegas, Nevada, where she is the PDS®-supported owner dentist of Rocksprings Dental Group. She is a faculty member of the PDS Institute® as a subject matter expert for the oral-systemic link. Her life motto is, “The ones who are crazy enough to think they can change the world are the ones who do.” Rebecca Sorci is the dental education manager for Pacific Dental Services®.

Click on the image below for a downloadable PDF letter you can share with a health care provider colleague: 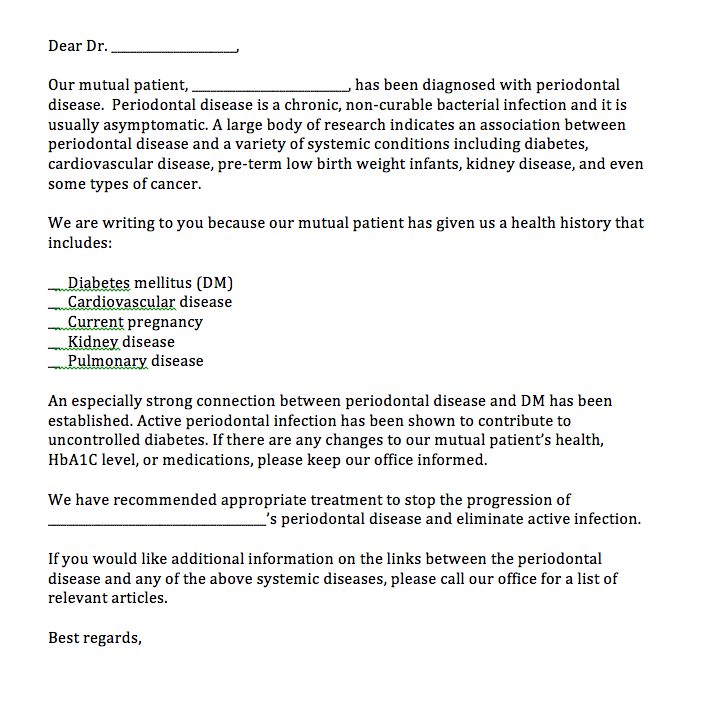 18. Watts A, Crimmins EM, Gatz M. Inflammation as a potential mediator for the association between periodontal disease and Alzheimer’s disease. Neuropsychiatr Dis Treat. 2008;4(5):865-876.