In 1983, a patent was awarded to Francis Mouyen for the concept that led to the first commercially successful digital intraoral x-ray detector dedicated to dentistry.1 This came just 4 years after after the Noble Prize in Medicine was awarded to Godfrey Hounsfield and Allan Cormack for their work leading to the development of computed tomography (CT).2 Cone-beam CT (CBCT) was first introduced commercially in the 1980s by Siemens Corporation for computing 3D tomographic images in angiology using a C-arm with image intensifier.3 The first CBCT patent dedicated to maxillofacial imaging was awarded in 1996 to Attilio Tacconi and Piero Mozzo; it later became the NewTom (Biolase, www.biolase.com), the first device cleared by the Federal Drug Administration (FDA) and Center for Devices and Radiological Health (CDRH) for dentistry at the beginning of the present millennium.4

Four basic components permitted the development of affordable diagnostic CBCT imaging for dentistry. These are powerful algorithms, fast x-ray detectors, resilient x-ray tubes, and low-cost, high-capacity computing devices. The term “cone beam” simply means that the beam diverges from the x-ray tube anode; it is the same as that used for all transmission x-rays, including the intraoral 2D radiographs that have been used since the beginning of dental radiography in 1896.5 Indeed, CBCT image volumes are created from hundreds of simple 2D transmission images known as basis images. These hundreds of exposures occur in a few seconds, hence the need for detectors that can acquire the images quickly without afterglow from the previous frame. These detectors can be flat panels using amorphous silicon or, increasingly, complementary metal oxide semiconductor (CMOS) detectors, with few manufacturers still using image intensifiers.

Further, computer power and storage is now at an all-time low price. For these reasons, CBCT is now widespread in dentistry, with the 2014 American Dental Association (ADA) Annual Meeting in San Antonio providing numerous choices in its Commercial Exhibit.

Hybrid panoramic/small field-of-view CBCT systems are attracting attention, with prices most often $90,000 or less. Large field-of-view systems are available for around the $150,000 price point. Another trend is for 3D x-ray imaging systems to be integrated more closely with CAD/CAM and visible light impression systems. Visible light scanning impressions generally provide monochrome STL file output, but there is now also a move towards the additional choice of DICOM file output that allows for color. Such DICOM image files for 3D impressions can be fused to CBCT radiographic volumes. This provides for high-resolution, undistorted images of tooth crowns and preparations at the same time as lower resolution x-ray images of the supporting tissues. Starting in 2015, CDT provides a new code specifically for 3D visible light images used for diagnostic purposes.

Apparent at ADA 2014 was evidence of increasing concern for patient safety by x-ray equipment vendors and dentists. There was an Image Gently booth in the Exhibit area, and vendors of x-ray equipment commonly indicated that their products had low radiation modes. The Image Gently Alliance membership now includes 16 dental professional organizations, including the ADA and the FDI (World Dental Association). The alliance advocates child-sizing the dose when radiographic procedures are necessary for children.

There is sometimes a misconception that digital x-ray imaging is always low dose. In reality, digital x-ray systems, including CMOS solid-state detectors and photostimulable phosphor plates, have wide recording latitudes. It is possible for the operator to make over-exposures by more than an order of magnitude and, unlike with analog film radiography, still receive a diagnostic image.6 While some manufacturers of solid-state intraoral x-ray systems provide feedback concerning unnecessary overexposure, Practitioners must achieve as low as reasonably achievable (ALARA) exposures to achieve diagnostically acceptable images. Practitioners must choose the situations where diagnostic images are needed based upon evaluation of the individual rather than merely as a routine. This requires that a health history be taken and that the practitioner inspect the patient clinically before prescribing any radiographic images.

Digital radiography is now the norm, especially for new dentists—many of whom have never experienced analog film radiography—as dental schools have largely moved to entirely digital radiographic environments. For intraoral radiography, the technology is now fully matured, both for solid state and for photostimulable phosphor technologies. Although there are variations in spatial resolution claims, these are of unknown clinical utility, as most dental diagnostic tasks using radiographs are relatively low resolution.6 Essentially, all available FDA-cleared digital intraoral radiographic devices are capable of achieving needed spatial resolution. It is perhaps sensible to purchase intraoral x-ray devices from a well-established vendor with at least a decade in the business. Compatibility with practice management software integration and assurance of technical support as computer operating systems are updated are important. As with all digital x-ray systems, maintenance agreements are a good idea.

Digital panoramic radiography systems were first available in the mid 1990s and now can be considered part of a mature dental imaging segment. The trend has been away from mechanical towards computerized controls of operation. Several systems now permit the collection of digital data that can permit the selection of different image layers or focal troughs before storage of the 2D information. With such capabilities, it is possible to make separate images of the maxilla and mandible if there is a sizeable discrepancy between the positions of the two dental arches. Special programs are also sometimes available to improve the orthogonality of the x-ray beam trajectory to open the contacts of the adjacent teeth better than was previously achievable with panoramic radiography. Although this has been termed a “panoramic bitewing” by some manufacturers, this is really a misnomer, as the projection shows the full crown and roots of the posterior teeth and is therefore a combination of a relatively low spatial–resolution bitewing and a periapical series of the regions concerned. Fortunately, as mentioned previously, most dental radiographic tasks do not require high spatial resolution, so detection of dental caries and periapical lesions can be achieved. Caution is needed, as panoramic imaging does result in superimposition of anatomic details from the two sides of the head, with the information from the second side being blurred out of recognition. This is usually not a problem in the absence of dense metallic restorations, but when there are such restorations, these may not be entirely blurred out. Still, in patients who are unable to tolerate intraoral projections (eg, patients having mucositis or trismus), an extraoral projection using panoramic technology is better than not being able to make needed radiographs.

As panoramic systems improve in image quality, the traditional full-mouth intraoral survey is gradually being replaced by a panoramic image plus bitewings. In patients with few restorations, a panoramic radiograph—alone or with bi-maxillary projections of the posterior teeth taken with beam orthogonality—may suffice. Most manufacturers of panoramic dental radiographic systems now provide at least one panoramic system that can be upgraded to include CBCT.

While 2014 was not a year for paradigm shifts in dental imaging, as noted above, there was a steady evolution of devices making lower dose x-rays available. Professional judgment is still necessary to decide when x-ray images are really needed, and then to select imaging parameters that can achieve a diagnostically acceptable image, or image volume, at a dose that is in keeping with the ALARA principle. There have also been improvements in the ease of use of dental x-ray imaging devices due to better software, and better input devices for imaging parameter selection. CBCT systems are more attractive in appearance and are generally achieving smaller footprints, improving their ease of placement in the average dental office. The movement towards the use of visible light impressions for CAD/CAM restorations is progressing rapidly. Such 3D visible light images can be fused with CBCT datasets to show accurate details of tooth crowns—even when heavily restored—combined with CBCT x-ray details of the tooth roots and supporting jaws. Dentists are now architects for planning and conducting oral rehabilitation using 3D images and computers, rather than merely free-hand sculptors using air turbines.

The GXS-700™ system from Gendex features a high-performance sensor that captures high-resolution images, providing more than 20 visible line pairs per millimeter. The sensors are available in 2 sizes for children and adults and have direct USB connectivity.

ProVecta S-Pan from Air Techniques offers 17 x-ray programs, including 4 lower dose options specifically designed for children. Its sensor captures 20 layers of images and slices them into 20,000 segments to compile the sharpest image possible.

Cephalometric images are acquired by Carestream’s CS 9300C in a single shot, minimizing distortion and risk of blurred images due to patient movement. The system delivers maximum-quality images at a low radiation dose for better patient protection.

Planmeca ProMax® 3D uses cone-beam technology to create full anatomical 1-to-1 visualization of the mandible and maxilla without distortion. It is designed to obtain complete patient information for a wide range of specialties.

With a 3D cylinder volume of 8 cm in diameter and 8 cm in height and a standard resolution of 160 µm, ORTHOPHOS XG 3D from Sirona is precisely tailored to capture the patient’s whole jaw in a single span.

CRANEX® D from Soredex is a direct digital panoramic and cephalometric x-ray system that provides superior image quality and more diagnostic value. Available as a single or dual sensor system, the CRANEX D grows with your practice. 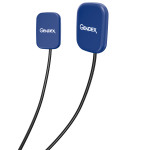 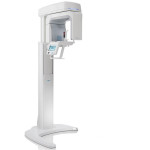 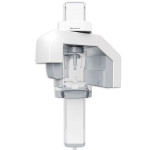