This first article of a two-part series discusses bone sounding to acquire buccolingual information. Next month, Part 2 will describe the use of cross-sectional imaging as an alternative mode.

In recent years, the implants made by different manufacturers all appear to have high success rates despite differences in surface technology, geometric differences in screw thread design, and variables such as tapered body vs. straight, microgrooves, nano-grooves, platform shifting, etc. With these high success rates, it should be increasingly difficult to improve on the biologic integration of titanium and human bone. Therefore, if the biology and mechanics are more or less covered, what then remains the biggest clinical hurdle? In the author’s opinion, the answer lies in how to get the implant from its sterile container into the exact correct position in the patient’s mouth.

In support of this opinion are these observations and deductions. First is the evidence that can be found in various dental laboratories showing clinical cases in which the implant was not exactly in the ideal position for the restoration, suggesting that placing implants consistently in the correct position can be a challenge. Next is the fact that the percentage of dentists placing implants remains relatively low, raising the question: If dental implants are so successful in clinical outcome, compensation for the provider, and in improving patient quality of life, why are so few clinicians offering them? Perhaps the answer is fear. Fear is, of course, a healthy human protection mechanism—steering us away from danger; sometimes, though, fear prevents humans from exploring otherwise exciting new frontiers. Some of the “fear factors” in surgical implant dentistry concern mostly anatomical limitations—lingual concavity, neighboring roots, sinus cavity, mandibular canal, etc. Although experienced implant surgeons have found ways to control these anatomical limitations, clinical reality suggests that even for this group, the implant position relative to the prosthetic outcome is not always ideal mainly due to the many factors at play—all of which must be handled correctly during the few minutes while the implant site is prepared and the implant is placed.

In response to the challenges that discourage new adopters and may foil even the most experienced implant surgeon, a new approach that has been developing over the last few years involves the use of fully restrictive surgical guides. While all of the knowledge to determine the correct 3-dimensional (3-D) implant position must be complete and up to date, the skill level to execute the surgical component can now be much lower compared to the traditional free-hand approach. Because the surgical guide is fully restrictive, the only decision to be made during the surgery concerns the resistance felt during the creation of the first osteotomy as an indication of how soft or hard the bone is. This will then dictate whether there is a need to underprepare, and what the diameter of the last drill should be. Everything else has been predetermined outside of the patient’s mouth in the computer or on the bench. This technology enables less-experienced clinicians to deliver the same superior care as conventionally trained implant surgeons. This is not to suggest that a lower level of skill translates into a lower level of care; quite the opposite, as serious treatment planning and seamless execution allow for a consistently high level of care. Using this technology enables a larger group to deliver the desired outcome, much as a calculator enables the mathematically challenged to arrive at the same correct answer as the brain of a gifted mathematician.

Case selection is of the utmost importance. The decision about whether to refer or treat should be made before a case is even started; it should not be an afterthought of poor treatment planning. The International Team for Implantology has developed an excellent classification system (the SAC System), which can aid clinicians in matching a case to their clinical ability. The system has three main categories—Straightforward, Advanced, and Complex. It even has a web-based version of the SAC Assessment Tool, free of charge (available at www.iti.org).

Surgical guides to communicate prosthetic reconstructive requirements in relation to the available bone volume come in many shapes and forms—from those that are very simplistic and non-limiting, to partially limiting, to fully limiting.1-9 This article describes a new direction in the development of an economical, fully restrictive, analog-model-based surgical guide (the 3D Click Guide®, Idondivi, Inc, www.3dclickguide.com). The guide can be fabricated in the office or assisted by a dental laboratory, and is intended for cases requiring one to two implants. The system consists of a Bucco-Lingual Positioner (BLP) (Figure 1), a buccal wing, a lingual wing, and three rotation blocks, which allow for instant correction of 0º, 3º, or 7º.

Bone sounding requires a short anesthetic needle (27G short) with a rubber endodontic stop and some topical anesthetic. Although the use of a periodontal probe has been proposed by some in the past,10 the author recommends against it because it is unnecessarily painful for the patient. Figure 2 shows the appropriate measuring positions. Average soft-tissue values are 1.5 mm at the buccal and 1 mm at the lingual; palatal readings are between 3 mm and 8 mm. Bone sounding has been widely described in the literature as a simple and dependable technique,11-19 with some authors reporting an underestimation of the ridge width by 0.4 mm to 0.5 mm20,21 as a built-in safety margin. Gathering of the cross-sectional information takes less than 1 minute, and this technique is used by the author in over 95% of one-implant and two-implant cases; a high percentage of these are made possible by the fact that, in general, an actively overextended vinyl polysiloxane (VPS) impression is used, as described below, exposing a large part of the crest. This technique allows capturing of a much larger area of the bony ridge compared to a conventional impression. The impression is poured in a stone or VPS casting material. Because the casts will be cut and may need to be repositioned, the Accu-trac® tray-system (Coltène, www.coltene.com) has proven to be very easy to use in the author’s practice. Alternatively, one can use a Pindex system (Coltène), or even just a simple rubber base former.

The patient presented with a healed site after the extraction of tooth No. 30. A single implant was planned, using the guidelines below.

1. Take an overextended VPS impression. Fill a stock tray with stiff VPS putty (eg, ExaMix™, GC America, www.gcamerica.com) and cover it with a thin sheet of plastic food wrap. Once the putty is placed in the mouth, use finger pressure to push the putty against the lingual and buccal soft tissue. This results in a tight adaptation of the soft tissue against the bone. Upon setting, mix a small portion of new putty and add to the buccal and lingual of the impression at the treatment area. Again, it should be covered with the plastic wrap, and placed back into the mouth. Use additional finger pressure to push down the soft tissue and actively overextend the impression. Remove the tray from the mouth; then remove the wrap from the mouth. At this point, this pre-impression is filled with injection VPS material and repositioned. The resulting impression captures a much larger area of the crest than is common in dentistry.

3. Measure soft-tissue thickness, with five readings per implant using a 27G short anesthetic needle. Note that the crest can also be measured from the radiograph.

4. Pour impression material into an Accu-trac tray using dental stone (eg, Earth Stone, Tak System Inc., www.taksystems.com.
) or VPS casting material (eg, Blu-Mousse®/Mach-2®/Mach-SLO™, Parkell, Inc., www.parkell.com). (Note that a Pindex system could be used as an alternative.) Then place the denture tooth or wax-up, and mark the buccogingival outline of the desired prosthetic outcome. The shoulder of the implant should, in general, be 2 mm to 3 mm below this line.

6. Cut the cast along the mesiodistal path of the proposed mesiodistal axis for the implant. The cut is based on an estimation of neighboring roots and the center of the tooth that will be replaced, using radiograph and anatomical information. Transfer the five tissue-thickness readings to the cut face of the cast; then connect the markings parallel to soft tissue.

7. Mark the desired buccolingual implant axis on the cast relative to bone volume and wax-up. Determine the desired top of implant, and drill a 2-mm hole at the implant axis. The top of the implant is generally 2 mm to 3 mm below the buccogingival outline. This placement will place the top surface of the rotation block 9 mm above the shoulder of the implant (9 mm + 1 mm = 10 mm above the drill guide). Place the blue BLP in the hole and line it up with the drawn axis. Secure it with fast-setting cyanoacrylate glue (Figure 3). Remove some cast material from the opposing part of the BLP, then place parts of the cast back into the Accu-trac tray or Pindex cast.

8. Position the correction slot of the buccal wing on top of the BLP. Cut or bend wings/radiographic implant replicas (RIRs) as needed for passive fit. Attach and adjust lingual wing (white). Position the complete assembly on top of the BLP (Figure 4). Secure the wings and RIRs with PMMA ortho acrylic to create an irreversible solid connection (Figure 5). Remove the cross member, exposing the retention rails.

9. Place the surgical guide in the patient’s mouth and take a radiograph. If the radiograph is exposed correctly—perpendicular to the ridge— the images of the two RIRs will overlap and appear as one. This indicates a diagnostically appropriate image (Figure 6). In this case, the trajectory is as desired—no rotational corrections are needed— hence, the 0º-rotation block (green) is selected (Figure 7).

10. Drill with the 2-mm pilot drill to a short and safe depth and evaluate the length of the osteotomy. The top of the rotation block is 9 mm above the top of the implant. The drill guide is 1 mm thick, so the drill stop should be set at + 10 mm for accurate depth control. For example, a 10-mm osteotomy requires the drill stop to be set at 10 mm + 10 mm = 20 mm. The final length of the implant can then be determined and the osteotomy can be prepared to length (Figure 8).

The patient presented with a healed site after extraction of tooth No. 19. A single implant was planned and placed as described below.

1. Initial work-up and guide production were similar to Case 1. In this case, however, the initial setup was deemed incorrect and the mesio-trajectory had to be adjusted. The radiograph was well exposed because the buccal and the lingual wings overlapped; hence, the image was suitable for diagnosis. It was determined that a 7º rotation with a red rotation block was warranted (Figure 11).

3. The final osteotomy was made per the manufacturer’s drilling protocol in a fully guided manner, using the Universal Drill Guides (Idondivi, Inc.) and dedicated drills (Astra Tech Dental, www.astratechdental.com) (Figure 13).

4. The implant (OsseoSpeed™ TX 8 x 4.0, Astra Tech Dental) was placed with a conventional carrier, as the diameter of the guided instrumentation of the implant manufacturer was 0.5 mm larger and thus not compatible with the 3D Click Guide system. This allowed the visual guidance needed to see that the carrier remained in the center of the rotation block. Depth guidance is based on the bottom of the osteotomy (Figure 14 and Figure 15).

Three-dimensional implant placement is driven by an international peer-established knowledge base of criteria. The clinical execution in a freehanded or limited guided manner is still highly dependent on individual operator skill. Fully restrictive surgical guides allow operators with less experience to place implants expertly and for experienced clinicians to do so more expediently. Computer-generated surgical guides are less economical for smaller cases; hence the development of an economical dedicated analog surgical guide for one- to two-implant cases. 3D Click Guide® is an in-office model-based surgical concept using data from bone sounding measurements or, if desired, CBCT. 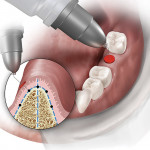