The patient was a 65-year-old, slender framed male. He had been wearing dentures for many years and suffered from an ill-fitting mandibular prosthesis, despite several remakes. During the first consultation with the removable team, the energetic retiree complained specifically about difficulties when speaking and chewing, as well as recurring mandibular sores.

After extensive clinical and radiological examination, the treatment plan developed for the patient called for creation of a complete maxillary denture and a screw-retained permanent hybrid mandibular bridge. To retain the mandibular denture, four CAMLOG implants (CAMLOG, www.camlog.com) were placed in the mandible. Following the placement of the implants, impressions were taken and sent to the dental laboratory. From the impressions, master casts were created and mounted on an articulator (Candulor CA II, Candulor ). The condyle path inclination of the articulator was adjusted to 28º on the right and 30º on the left in neutral occlusion (Figure 1).

The mandibular restoration must be accessable between the implants for cleaning with interdental brushes. The ovate pontic on the soft tissue should not display any saddle-like constellations (ridge laps) and must be cleanable with dental floss. The denture would be mounted on an implant bar with passive bonding on the framework.

The author marked a red line parallel to the ridge crest on the lower master cast using a profile compass (Candulor) (Figure 2). It was, however, only used as a reference point because the final restoration was an implant overdenture and not a conventional complete denture.

A putty index was taken of the plaster bite rim and used to align the upper anterior teeth (PhysioStar® NFC+, Candulor). The midline of the anterior teeth and the canine cusp tips were positioned as planned (Figure 6 and Figure 7). Due to the insufficient space on the left anterior teeth arch length, the upper right lateral incisor was trimmed and slightly rotated (Figure 8 through Figure 10). Though symmetry and proportion are important elements for esthetics, occasionally asymmetry can bestow naturalness. Such arrangement can be adjusted through communication between the patient, dentist and dental technician, which in the author’s opinion is the key to genuine collaboration.

Verification of the Final Occlusal Plane and Anterior Smile Line

The anterior smile can be imagined by cutting the putty index along the given smile line arc (Figure 11 and Figure 12). Though it was required to align the posterior denture teeth (Condyloform® II NFC+, Candulor) (Figure 13 through Figure 16) along the buccal contour of the plaster bite rim (red line on Figure 17), the author did not follow the instruction because the lingual space would be invaded and it strayed out of the Pound line (Figure 18). The lingual surface of the denture teeth could have been trimmed to compensate for such aforementioned limitations. Instead, Professor Albert Gerber’s theory (www.condylator.com) that the centric occlusal contact point of the lower teeth must come on the ridge crest was followed, resulting in the denture teeth aligning more buccally than the plaster bite rim index (blue line, Figure 19).

The occlusal surface of the molars is prefabricated with the form of lingualized occlusion, which eased the denture teeth arrangement. Firstly, the buccal and palatal cusps of the upper first premolar were aligned on the occlusal plane. Then the lower second premolar and first molar were arranged on the ridge crest of the mandible and their buccal and palatal cusps were arranged to coincide with the occlusal plane. Finally, the upper molars were arranged according to the accurately aligned lower teeth (Figure 20 through Figure 22). Considering the positions of the implants of this case, the denture teeth were only arranged until the first molar.

Fabrication of the Metal Framework

The resolution to a limited space is finishing the lingual surface by metal, yet in this case it was finished with resin because the prototype suggested so, resulting in a bulkier restoration (Figure 23 through Figure 26).

The gingiva was festooned in harmony with the length, proportion, and zenith of the upper and lower denture teeth, as well as the surrounding muscle action. The palatal rugae were more emphasized than usual considering the final polishing (Figure 27 and Figure 28).

Modification of the Mandibular Cast

To allow ease of oral hygiene control and to achieve slight tissue pressure with the formation of the ovate pontic, the ridge crest of the master cast was modified by trimming it less than 1 mm (Figure 29).

Putty with a shore hardness of above 86 was used for the flasking process. The putty helps to minimize the distortion of denture teeth position, preventing monomer from absorbing into the cast during the coloring process and assuring a clean surface.

Though flasking is more difficult when using heat-curing resin, the author prefers it over autopolymerization resin due to the issues of residual monomer, material strength, and stain deposition. Candulor esthetic base material polymer Color Number 53 and 55 were used in the ratio of 20:80 for the overall shade. Irregular yellow spots and red fiber were occasionally applied (Figure 30 through 34).

Unlike the general result of a deflasked denture, a clean surface was obtained with the use of the aforementioned putty. With the use of the Aesthetic Color Set Easy (Candulor), almost any type of gingiva color can be expressed. To achieve a natural gum shade it is always important to consider an asymmetrical composition rather than a symmetrical one, and to obscure the definite boundary between colors and to express with gradation. Furthermore to execute such naturalness, I believe that the sprinkle-on method is more favorable than mixing and adding on the colors (Figures 35 through Figure 38).

After trimming the excessive resin with a paper cone, polishing is commenced using a silicone point and a silicone wheel. A linen wheel, leather buff, and cotton wheel are sequentially used for the final polish (Figure 39). Care must always be used minimally and an RPM recommended by the manufacturer must always be observed. Excessive pressure and inadequate high speed polishing will damage the elaborately generated texture. The recommended RPM of the Bredent wheel products is approximately 10,000 RPM (Figure 40 and Figure 41).

Minimal space was given at the base and between the ovate pontics to allow the patient to easily use dental floss and proxabrush (Figure 42).

To produce an esthetic and functional prosthesis in relation to the occlusal status of the patient, proper selection and handling of the dental material are necessary. Moreover the author believes that the original material should be used as it is provided and that only minimal modification should be bestowed to the restoration for individualization. The author would like to emphasize again that for the fabrication of a successful removable prosthetic, the collaboration amongst the patient, dentist, and dental technician is very important.

The author would like to express special thanks to Sojin Lee, DDS, Jooheon Lee, Meister, and Yoosang Lee.

Note: The author submitted this case for the 8th KunstZahnWerk® Competition 2013, where he was awarded 1st place in the category of Best Documentation (www.kunstzahnwerk.com).

Contouring the Denture Base 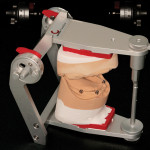