A new method for fabricating dentures.

To achieve excellence in the fabrication of removable and screw-retained prosthetics using today’s latest technology, it is important to understand each step in the process and the best options available. Heraeus has a unique new material that can be used in the Palajet® to make superior prostheses. The process begins with the impression and an accurate vertical registration (Figure 1 and Figure 2). It is vital for the wax-up to represent the desired result in function and esthetics (Figure 3). Injection is superior to pouring or press packing appliances, because it introduces additional acrylic while polymerization shrinkage occurs; as a result, there is superior fit and no distortion.

The Palajet system offers two types of flasks—a single flask and a dual flask. The Duoflask option, with its two arches in the same flask (Figure 4 and Figure 5), saves valuable time and also adds consistency to the process. When custom tinting is applied to the denture base, it is easy to use the same mix of colors (Figure 6). Palaxpress® ultra is an exciting new acrylic that uses a different chemistry for polymerization. There is no by-product (ie, peroxide) that is a derivative of an amine-based polymerization process in conventional acrylic, which means it is a color-stable, dense acrylic that can stand the test of time. As the acrylic polymerizes, small rubberized zones are formed in the acrylic to make it extremely resilient. Another component of the Palajet system is Palabond®. It increases the bond between the teeth and the acrylic base, and is suitable for all acrylics. Before application, a rough diamond is used to prepare the exposed surfaces of the teeth. It is recommended that two coats be used, and there is a 10-minute window before processing. Palabond provides a reliable bond at the interface of cured acrylic and new acrylic, like
denture teeth or denture base in a reline.

The entire system is straightforward and simple. It is designed for accuracy and efficiency, and it uses two types of acrylic. With a vent, it is possible to use Palapress vario or Palaxpress ultra and inject bar- and screw-retained cases with the acrylic at lower viscosity. This advantage enables the acrylic to fill the flask that surrounds the intricate internal components and the teeth that have been reduced to veneers. Then the vent is closed with none of the components being displaced. With the vent closed, the acrylic is under pressure, with additional acrylic injected until it reaches the b-stage in polymerization, during which all the shrinkage occurs.

After the case is injected, the flask is placed into the Palamat® Elite for 25 minutes under pressure at 55ºC degrees (Figure 7). Once cured, it is allowed to cool at room temperature, then de-flasked.

As long as the technician is careful with occlusion and waxing, the finishing of the denture case should be minimal and will replicate the preview already approved by the patient and doctor.

Another benefit of the Palapress vario or Palaxpress ultra is the “putty matrix” partial denture technique with which the partial denture is set and waxed before the silicone putty is applied to the buccal and occlusal (Figure 8). The wax is then eliminated and the teeth are prepared as discussed previously. The acrylic is mixed and poured into the open space in the lingual (Figure 9). This technique is not just a time-saving method—it is also less stressful than “press packing” because it eliminates the potential for distorting the main connector or clasps during the divest-
ing process. All of this can also be performed at the technician’s bench.

The foremost advantage of the entire system is that the pressure is applied after the mold is filled with low viscosity acrylic using a vent as described earlier and the temperature is lower (Figure 10 and Figure 11). This can enable delivery of the case on the original model, eliminating the entire time-consuming and imprecise task of duplicating the master model (Figure 12).

The continuing search for new and proven ideas and technologies will bring the profession into a new age of dental laboratory excellence (Figure 1). Those unwilling to change with the times and embrace proven techniques and materials that deliver superior results, such as those described above, are likely to be left behind. After all, if no one had ever thought of developing a printed form of communication, we could not read this today.

T.G. Hornischer Jr., is the technical director of removables for BonaDent Dental Laboratories in Seneca Falls, New York. He is also the recipient of the NADL’s Excellence in Education Award and Merit Award. T.G. earned his degree in Dental Technology in 1979 and received his National Board Certification in 1981.

The preceding material was provided by the manufacturer. The statements and opinions contained therein are solely those of the manufacturer and not of the editors, publisher, or the Editorial Board of Inside Dental Technology. 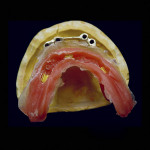