The ability of denture teeth to retain their original color is essential both for patient satisfaction and to prevent the need for remaking prostheses. Two factors that can affect shade accuracy during clinical use are plaque resistance and color stability. Two in vitro studies—one in Regensberg, Germany and the other in São Paulo, Brazil—took a look at these characteristics in various denture tooth materials. The researchers’ findings demonstrated the exceptional plaque resistance and color stability of Nanopearls material, which is used to fabricate the Premium and Mondial lines of denture teeth.1,2

The 2008 study, conducted at the Regensburg University Medical Center in Germany, included a wide range of denture tooth materials.1 Its objective was to evaluate the susceptibility of artificial teeth to adhesion of the oral bacterium Streptococcus mutans. Bacterial colonization is one significant aspect considered in the clinical performance of dental materials.

Specimens were incubated with Streptococcus mutans NCTC 10449 suspension for 2.5 hours at 98.6°F. Adherent bacteria were quantified through fluorometric assay. The relative fluorescence intensity correlated linearly with the amount of adherent bacteria. Medians and percentiles of 25% and 75% were calculated.

Premium 6 and Bioplus exhibited the lowest values of adhesion to Streptococcus mutans with no significant difference between them, while significant differences were observed Premium 6 and the other teeth tested (Table 1). The authors recommended dental material with low susceptibility to microorganism adhesion to avoid plaque and denture stomatitis. 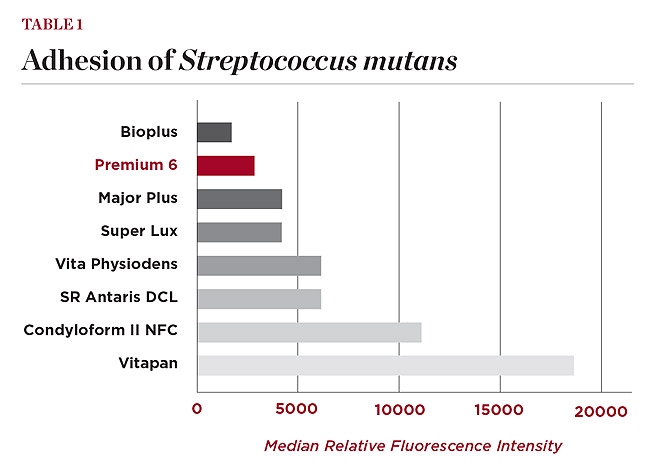 The second study, which was launched the following year at Brazil’s Araçatuba Dental School, tested the color stability of the same denture tooth materials.2 Discoloration of denture teeth can be a problem during clinical use. The aim of the study was to determine the effect of denture base polymerization methods and thermal cycling on the color change of artificial teeth.

Note: Both of these studies originally appeared in the Journal of Prosthetic Dentistry and have been summarized by Heraeus Kulzer. 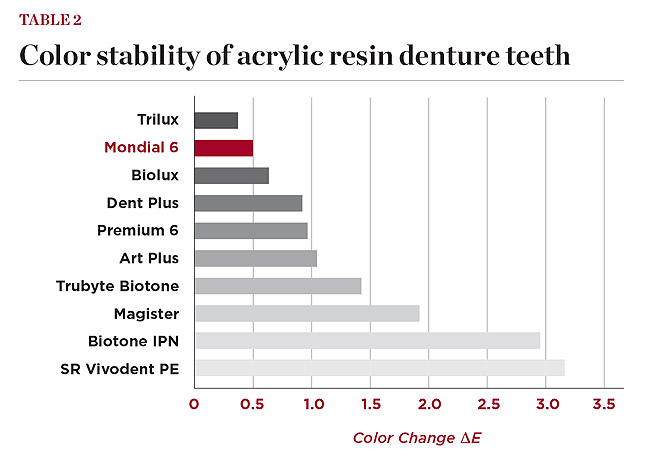 The preceding material was provided by the manufacturer. The statements and opin-ions contained therein are solely those of the manufacturer and not of the editors, publisher, or the Editorial Board of Inside Dental Technology.