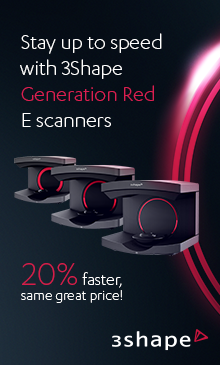 Producing an implant-supported restoration that replicates the emergence profile of the natural tooth contours facilitates oral hygiene and minimizes food impaction, which reduces the presence of gingival inflammation and the consequences of peri-implantitis.1-3 In addition, the buccal gingival margin and papillae will have the appropriate support to minimize the development of recession and open gingival embrasures.

Discussions pertaining to the emergence profiles of implant-supported crowns have largely focused on optimizing anterior esthetics while little attention has been paid to improving treatment workflows for posterior implant restorations. When used in molar locations, stock healing abutments often fail to approximate the rectangular cervical form of the natural tooth, and this can result in their inability to adequately contain bone graft particles.4 In order to achieve a realistic emergence profile of the final restoration in these cases, the laboratory technician must expand the subgingival profile beyond the impression, which may lead to tissue blanching and difficulty seating the restoration.

Fabricating a custom healing abutment immediately after implant placement can help to better contain any graft particles used as well as to sculpt and support the gingival tissues. Because the impression will approximate the natural emergence profile, it can allow for greater precision in the creation of the definitive restoration.4

One approach to the fabrication of custom healing abutments at the time of immediate implant placement is the method proposed by Akin.4 In this technique, a custom healing abutment is fabricated using the extraction socket as a matrix for the emergence profile before bone grafting material is placed. An abutment fabricated in this manner effectively contains the graft and supports the gingival tissue; however, several authors have reported that the tissues collapse after extraction, so the abutment may be slightly undercontoured.5-8

Chu and colleagues developed a series of PMMA shells that approximate the shape and volume of the cervical area of the extracted tooth.5 These are placed at the time of immediate implant placement to control bleeding and support the gingival tissues. Although these shells are available for most teeth, they are only available in one size, so they may not exactly replicate the emergence profile of the extracted tooth. The clinical significance of this discrepancy is unknown.

For implant-supported restorations in the anterior region, other clinicians have proposed utilizing the extracted tooth to fabricate an immediate provisional restoration; however, in the molar region, the possibility of inadvertent occlusal forces on a newly placed implant and the fact that molars are sectioned during extraction precludes the use of these teeth as provisional crowns in this fashion.9-12

The following case report demonstrates a technique in which an extracted maxillary molar is reassembled and used in the fabrication of a screw-retained custom healing abutment. Provided that the extracted tooth is saved, this method can be accomplished following the placement of the bone grafting material or even following the healing of the socket in a delayed implant placement approach.

A healthy 50-year-old female patient presented to the practice with pain in her left sinus and a swollen left cheek. Clinical and radiographic examinations were performed (Figure 1 and Figure 2). After subsequent investigations led to a diagnosis of sinus perforation involving her previously treated maxillary left first molar, the patient agreed to treatment involving extraction of the tooth and restoration with an implant-supported crown. Prior to extraction, a matrix impression of the quadrant was made with a material that could flex without tearing (Jet Bite®, Coltene). Enough impression material was used to result in an impression with high walls. The tooth was then extracted by sectioning it such that the roots could be removed individually and atraumatically, and the pieces were retained (Figure 3). Following a delayed protocol, the implant was placed 6 months after extraction.

After implant placement, the patient returned to the practice with a stock healing cap in place (Figure 4). The extracted tooth was reassembled with orthodontic wax (GUM® Orthodontic Wax, Sunstar) to fill the gaps left by the sectioning bur (Figure 5). Once its original form had been reestablished, it was lubricated with petroleum jelly and inserted into the matrix that was made prior to extraction. A gingival masking material (Gingitech™, Ivoclar) was then applied to the cervical portion of the tooth, leaving the furcation untouched, and the material was trimmed from the contact point (Figure 6).

With the tooth and gingival masking material in place, a cast was poured with dental stone, leaving the furcation clear, and allowed to set (Figure 7). The matrix was then peeled away, being careful to not fracture the cast (Figure 8). After the set cast was immersed in hot water to melt the wax, the tooth fragments were carefully removed, revealing that the gingival masking material had captured an accurate impression of the cervical portion of the extracted molar (Figure 9).

After ensuring that the wax was smooth to the top of the implant analog head, a temporary abutment (RC Temporary Abutment, Straumann) was air abraded and screwed into the analog. A bis-acryl composite resin (3M™ Protemp™, 3M Oral Care) was then injected around the abutment to the level of the gingival margin and allowed to polymerize (Figure 15). Once polymerized, the abutment was removed from the cast, and it was observed that the resin flowed completely to the base (Figure 16). The transition between the base of the abutment and the gingival margin was then smoothed (Figure 17). To complete the custom healing abutment, the subgingival portion of the restoration was polished, and the protruding abutment was cut off and made smooth with the top surface (Figure 18). When compared with a stock healing cap, a custom healing abutment fabricated with this technique will look wide and flat.

The completed custom healing abutment was disinfected and delivered into the patient's mouth (Figure 19). The screw was hand torqued, and the access was sealed with sterile polytetrafluoroethylene tape and composite resin (Venus® Diamond, Kulzer). If sutures are present, it is important to ensure that they are not under too much tension. The patient was dismissed with instructions to avoid placing any occlusal forces on the restoration and to carefully but thoroughly clean the area during hygiene.

After a 5-month healing period, the patient returned to the office (Figure 20). Approximately 1 mm of recession was observed, which is typical with immediate provisional restorations. The healed tissue exhibited greater dimension and a more rectangular shape (Figure 21) when compared with the results obtained with stock healing abutments in similar cases (Figure 22). Although this technique was time consuming, it resulted in the delivery of a definitive restoration that replicated the emergence profile of the natural tooth (Figure 23). In addition, the gingival embrasures and buccal gingival margin remained harmonious with those of the surrounding teeth, even with the delayed implant placement protocol used (Figure 24), and the bone and soft tissue levels were preserved (Figure 25).

In the technique described, the extracted tooth is used to fabricate an implant custom healing abutment that replicates the natural emergence profile. This provides optimal support for the dentogingival complex with less food impaction and facilitates oral hygiene procedures. Accordingly, this should result in an implant-supported restoration with less recession, mucositis, and consequences of peri-implantitis. This abutment also better seals the socket and contains any bone graft material when compared with stock healing abutments. An appropriately developed gingival bed demonstrates less blanching when the final restoration is seated as well as a reduced risk of ischemia and tissue necrosis.

An added advantage of this custom healing abutment is that it does not need to be fabricated by the surgeon. Because it is fabricated extraorally, it can be made later without any concern of incorporating bone graft material or blood. Furthermore, when a delayed implant placement protocol is used, the extracted tooth can be preserved and used months later to fabricate a custom healing abutment.

The author would like to thank periodontist Roland Leung, DDS, PhD, for his surgical expertise in the case and Chris Kirkpatrick for his technical assistance with the article.