Going Directly to the Consumer

Darin and Josh Throndson's direct-to-consumer journey began as a pandemic project. The brothers, owners of Innovative Dental Technologies in Memphis, Tennessee, had stayed busy during the COVID-19 shutdown by producing personal protective equipment (PPE), but they had also resolved to never again be left scrambling for income in the event of another nationwide closure of dental offices.

"What can we make that we can sell directly to consumers?" they asked. Most of what dental laboratories produce requires a prescription from a licensed dentist except night guards.

"We thought about SmileDirectClub and the various other direct-to-consumer companies in dentistry," Darin Throndson says, "and we realized nothing was precluding us from doing that with night guards. Especially now, with the ability to 3D print occlusal splints, it seemed like a no-brainer."

The Throndsons brought in a third partner who had more expertise in web development and social media, and together they launched BITEKNIGHT. To their knowledge, they are the first laboratory to sell digitally made night guards directly to patients.

Marketing was the challenge they were prepared for, which is why they brought in a partner to handle SEO, Google Ad Words, etc. The other challenge was simply dealing directly with patients.

"As laboratories, we are fortunate to deal with a highly educated clientele-dentists and their dedicated staff who know the professional terms and what laboratories need," Throndson says. "Dealing with the public is a whole different beast. Our greatest challenge has been trying to figure out a way for patients to take their own impressions in a quality manner."

Because so many patients take their first impression incorrectly, BITEKNIGHT now sends two impression kits from the start. They also have adopted a policy whereby, after two remakes, they refund the patient's money rather than trying a third time.

"We are stubborn and we want to make it right," Throndson says. "As laboratory owners, we have pride in our work and we are used to making things right for dentists. However, by the third remake, we are losing money. We had to check our egos and say, ‘If for whatever reason it is not right after two tries, we will just call it a learning lesson.' With dentists, cutting a client loose can cost you thousands of dollars in future business. With consumers, the hit is not nearly the same. We have had to shift our attitudes to accept that."

Even for successful cases, the BITEKNIGHT team often needs to speak directly with patients. They take turns answering the phone, and also have a bot service on their website that fields questions from consumers, identifies keywords, and provides prepared responses.

"We have tried to automate as much as possible," Throndson says, "but there is still much more interaction than I would have thought with consumers themselves."

The two sides to the business have proven to be dramatically different, but Throndson says some lessons can be applied to the traditional laboratory business. For example, Innovative Dental Technologies serves a client base that is more national than local, so they plan to launch a social media campaign for that business that draws from BITEKNIGHT's social media campaigns.

The reaction from their dentists has been surprisingly positive. Throndson says very few BITEKNIGHT customers say they chose to purchase directly from the laboratory because it would be more expensive through a dentist. He notes that BITEKNIGHT's target demographic is the approximately half of the US population that does not see a dentist regularly.

"Most dentists already have a laboratory they like, so their patients likely will get their night guards from those laboratories," Throndson says. "The US has more than 300 million people, and if half of them do not have a dental home, then that is 150 million potential clients. It is a much larger pool for us to get into. From a business perspective, it just makes a lot of sense to work both ends." 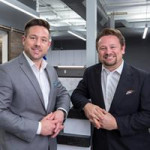