Immediately after introducing new scanners at tradeshows in Chicago and Germany in 2015, 3Shape’s engineers went back to work to build their next groundbreaking product.

“It is extremely exciting to target that segment because 3Shape previously has dealt more with larger and medium-sized laboratories,” Fisker says. “Of course, a crown is still a crown, but the needs of smaller-sized laboratories are different, so we approached the development of this product in a way that would address those needs.”

The E Scanner line still delivers the same high quality, advanced scanning features, and precision CAD/CAM workflows for which 3Shape has become known. In addition to affordability, however, developers also prioritized ease of use and a small footprint. The subscription models also were revised so that laboratories of any size can choose a no-subscription option or full services, including a 5-year warranty and replacement agreement.

“It was a dramatic change for 3Shape,” Fisker says. “We have always strived to create better and faster scanners, but that usually resulted in premium prices. We identified a major need in the market for an entry-level scanner that still exhibits high levels of accuracy and speed but allows small laboratories with fewer financial resources to adopt CAD/CAM technology. We feel strongly that it is important for every laboratory to integrate digital technology into the workflow in order to remain viable.”

E Scanners have 5-megapixel cameras and blue LED technology. They also can scan impressions. “We believe impression scanning is one of the next disruptive steps in this industry, so we are lifting the whole bar for entry-level scanners,” Fisker says.

3Shape also announced that it is developing a new Lab Studio software platform aimed at bringing all the laboratory’s digital applications into a single integrated interface enhancing ease of use. Also announced was the new Smile Design feature, which allows users to design smiles in 1-2 minutes, and powerful digital denture software. “We believe digital dentures will take off this year,” Fisker says.

Laboratories have been beta testing the new scanners since last summer, and Fisker says the feedback has been overwhelmingly positive for quality and usability. 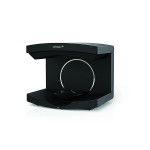