A diastema, or gap between two teeth, allows light to be absorbed instead of reflected and bounced forward. The presence of a diastema dims a patient’s smile by creating a dark backdrop for the surrounding dentition. This situation is especially evident when the patient smiles (Figure 1). The case presented in this article involves a 23-year-old female who presented with a hereditary condition that results in undersized teeth in both the maxillary and mandibular arches. The result was multiple diastema (Figure 2). Due to the small size of her teeth, diastema closure through orthodontics was not an option and would not support proper occlusion. The patient desired a full, bright smile to complement her fair skin and light hair. Restorative dentistry through placement of veneers and crowns was selected and a treatment plan was developed. The treatment plan included tissue recontouring in the maxillary arch to create a symmetrical gingival architecture (Figure 3), followed by placement of all-ceramic restorations on teeth Nos. 4 through 13 and 21 through 28. IPS e.max® Press LT (Ivoclar Vivadent, www.ivoclarvivadent.com) was selected as the restorative material of choice. Primary factors influencing restorative material choice included the ability of the technician to balance shade when dealing with variations in restorative thicknesses, and the ability of the technician to achieve beautiful esthetics with the material’s bleach shades while at the same time maintaining the strength and durability of the restorations.

The clinician recontoured the tissue of teeth Nos. 6-11, and the gingiva was allowed to heal for approximately 3 months, after which diagnostic impressions were taken and casts poured to form the basis for completing a diagnostic wax-up. A detailed diagnostic wax-up was developed, taking into consideration the patient’s esthetic concerns as well as the functional requirements necessary to provide a stable occlusal relationship. Facial evaluation was performed before starting the case to determine considerations regarding placement and design of the restorations. Facial horizontal planes, interpupillary line, vertical dissection dimension/midline, and lip curvature were evaluated to determine length, incisal edge positioning, midline, overall length-to-width ratios, as well as contour/shape (Figure 4). The completed wax-up was returned to the prescribing dentist along with silicone matrices to guide the preparation and temporization processes (Figure 5).

The clinician prepared the teeth according to the approved treatment plan, which called for veneer preparations on teeth Nos. 4-13 and 23-26, as well as crown preparations on teeth 21-22 and 27-28. Shade data was captured at this time via digital photography to guide the laboratory fabrication steps. This information included not only the desired shade for the restorations but also the stump shade of the prepared teeth (Figure 6). Because the shade of the final restorations would be influenced by a combination of factors—including not only the color of the selected restorative materials, but also the color of the underlying tooth structure and that of the cementation material used—it is vital that this information is conveyed to the laboratory. The anticipated influence of the color of the underlying tooth structure would drive all decisions related to material selection for both pressing and layering. To best evaluate whether the correct color had been achieved, the final shade evaluation and color correction would be accomplished with the restorations seated on tooth-colored dies that replicated the stump shade of the prepared teeth.

Upon receipt of all materials in the laboratory, master models were poured and mounted according to the patient’s bite records (Figure 9). The final wax-up for the pressed restorations was developed using wax injection (Figure 10 through Figure 12). In this technique, matrices made from the models of the approved temporaries were seated to the master model, and molten wax was injected to form the initial diagnostic wax-up. This facilitated efficient and accurate delivery of the wax to duplicate the lip support, incisal edge position, occlusion, and phonetics developed through the temporization process. Additional anatomic modification to optimize the esthetics was accomplished at this point, with care taken not to alter these important functional characteristics.

Upon completion of the wax-up, the author individually refined the margins, and the restorations were sprued and invested (Figure 13). The pressings were accomplished according to standard processing methods for the IPS e.max Press LT BL2 ingot, which was selected based on desired shade, prep coloration, and restoration thickness.

After pressing and divesting, the author checked and adjusted the fit of the restorations where needed and lightly rubber-wheeled the margins to remove any irregularities (Komet Universal polishers, gray and pink, Komet USA, www.komet.com). Sprues were removed along with the majority of contouring with sintered stones (Bredent Diagen-Turbo-Grinders, Bredent USA, www.bredent.com) (Figure 14). The surface of the ceramic was further refined using the Diamond-All ZR (American Dental Supply, www.americandentalinc.com). This bur reduces porosity better than diamonds, allowing final contours to be refined to a smoother finish.

Cutback is usually performed at the wax stage to speed the porcelain process, and is then later refined with a series of wheels. Initially, the cutback surface was adjusted using the sintered stone wheel, being careful not to be too aggressive and keeping the restoration wet (Figure 15). Finally the cutback surface was refined using a series of rubber polishers from Komet (dark blue-course finishing, light blue-fine finishing) (Figure 16).

The restorations were lightly sandblasted using aluminum oxide at 1½ bars, and then steam cleaned in preparation for the wash firing. The wash firing serves two important purposes: creating the bond between the lithium disilicate core material and the layering ceramic; and initial modification of the color characteristics of the restoration. The wash application for this case was very basic, incorporating Dentin BL2 and OE 1 powders (Figure 17 and Figure 18). OE 1 was applied to the entire surface, paying careful attention at the margins so as not to alter the fit surface. OE 1 was also applied to create slight translucency extending off the mesial interproximal contours framing in the incisal edge and was carried around the distal interproximal portion of the restorations (Note: Blue coloring was added to the porcelain to show placement.) Dentin BL2 was used to extend and enhance the internal mamelon structures (Note: Pink coloring was added to this porcelain to show placement).

Upon completion of the wash firing, the basic buildup was accomplished. When working with bright bleach shades, it is important to use a high-value enamel to eliminate the possibility of lowering the value of the restoration. For this patient, OE 2 was placed over the entire surface and OE 3 was placed precisely on the facial surface of the mesial and distal lobes, spreading a subtle layer into the middle third of the restorations to enhance value (Figure 19 and Figure 20). Contours were refined and excess moisture was removed by softly blotting with a tissue or blotting paper. The incisal halo effect was sculpted into place using Dentin BL2, which extended up the mesial and distal incisal edge and framed the insical portion of the restorations. Dentin BL2 was also feathered in lightly over the mesial and distal facial lobes and middle third of the restorations. This helps maintain brightness and reduces the graying effect that some may experience when layering bleach shades or other restorations requiring enhanced value.

The restorations were placed on a firing tray with a small amount of peg material and fired on a first dentin/buildup bake of 750° Celsius. There may be a second firing if needed, but the technician should slightly reduce the firing temperature by 5 degrees (Note: Firing temperatures may vary depending on the porcelain oven used). Contours should be intricately sculpted during the layering process to enhance natural esthetics and reduce the need for aggressive contouring after firing.

Contouring after buildup was accomplished using a variety of finishing instruments (Figure 21). Once contours were complete, a fine diamond was used to create surface texture (Figure 22). Finally, a Noritake Meister Cone (Kuraray, www.kuraray.com) was used in a flowing and slightly wavy pattern over the facial surface following the surface contours (Figure 23). This step refined the surface by producing a texture similar to natural dentition and producing a softer effect than could be achieved with the diamond alone.

The finished restorations (Figure 24 through Figure 27) exhibit outstanding esthetics, blending the patient’s desires for a fuller, brighter smile seamlessly into the oral environment while at the same time producing the high durability needed for long-term success. While the fabrication process incorporated a relatively simple layering approach, the value of the restorations was achieved, and the results are undeniably outstanding. 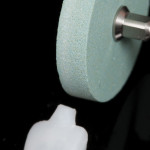