The female patient was in her 60s with a satisfactory medical history and maintained an active lifestyle and a positive disposition. However, probably as a result of a life spent in a region without water fluoridation, her dental history was complicated. She was edentulous in the maxilla, which had been restored with a tissue-supported denture. She presented with canine-to-canine dentition in the mandible. However, extensive recurrent caries gave a poor prognosis. Most restorative options would essentially be a rearguard action to delay inevitable edentulism. Interestingly, the soft-tissue condition was promising, and her bone health, as determined by palpitation and radiography, was very good. Upper lip support was necessary, and the patient was interested in enhanced esthetics as well (Figure 1 and Figure 2).

It is important to recognize that a patient presenting without implants may be considered for other options that may enhance fit, retention, and function. These include:

The clinician should weigh the risks and benefits of each option before deciding a treatment plan. These and other options were discussed with the patient, including the possibility of restorations with crown lengthening and endodontia to preserve existing teeth. Following the McGill consensus referenced above, implant-supported overdentures presented a viable and premium option. The patient consented to this treatment after reviewing the alternatives. The treatment plan was presented to the patient and assent was obtained.

Four implants were placed in the mandible by the attendant surgeon in the approximate positions of teeth Nos. 20, 22, 27, and 28. These 4.3-mm diameter implants featured a modified surface and tri-channel design for promotion of stability (Replace Select, Nobel Biocare, www.nobelbiocare.com). Surgery was uneventful, and was followed by the placement of healing caps and a healing period of 2 months (Figure 3). The patient wore an interim denture in this period. At the same time, the maxilla was freshly restored, following the Brewer technique but with up-to-date visible-light-cured materials (Eclipse, DENTSPLY Trubyte, www.prosthetics.dentsply.com) (Figure 4). The contour regions were created out of high-impact strength, laboratory-processed acrylic, and wear-resistant esthetic teeth (Lucitone 199, Portrait IPN, DENTSPLY Trubyte).

A satisfactory response was obtained with esthetics, phonetics, and functional evaluation, using the tissue-supported upper denture and the trial lower denture. Evaluation post-placement revealed what would become the primary restorative challenge in this case. The patient had very good bone structure. However, the ridge condition was relatively flat. In addition, the extraction and placement of implants presented a large inter-ridge space to restore, as expected (Figure 5 and Figure 6). The space would be restored with the aid of a CAD/CAM-milled implant supra-structure.

A stock disposable plastic impression tray was modified for the patient using an acrylic bur and heat. With the transfer copings in place, an impression was made. A hydrophilic rigid vinyl polysiloxane putty material and a medium-body material were used (Reprosil®, DENTSPLY Caulk, www.caulk.dentsply.com) (Figure 7). A cast was created immediately to capture detail, and the soft-tissue moulage was produced using a visible-light-cured urethane dimethacrylate-based material (Triad VLC Denture Base, DENTSPLY Trubyte) (Figure 8). A verification jig was splinted together using lightly abraded metal abutment copings and a visible-light-cured material (Triad Gel, DENTSPLY Trubyte) (Figure 9). This is a well-documented technique that enhances accuracy.9 A model with implants and analogs, wax-ups of the prosthesis, a vinyl polysilicone matrix, and a completed prescription were created to initiate the implant suprastructure processing (Figure 10).

The development of CAD/CAM capabilities for designing implant supra-structures has ushered in an era of predictability and accuracy due to computer-aided milling of prosthetic parts. The working model was scanned and a virtual prosthesis design was created. The treatment team was able to review and approve the design of the supra-structure prior to any milling taking place (Figure 11 and Figure 12). It was decided that the supra-structure would be milled by the Compartis ISUS milling center (DENTSPLY SmartSourcing Services, www.prosthetics.dentsply.com).

The initial design of a bar supra-structure, with four locator attachments to minimize fulcrum effects, was reviewed using the downloadable Compartis ISUS viewer software (provided to customers). This enables a review of the supra-structure design. A few adjustments (distal movement of attachments, taking into account A-P spread factors) provided a satisfactory final result. The layered view composed of the model, implant fixtures, supra-structure, and tooth position enables a relatively straightforward review. It was useful to evaluate hygiene implications of the prosthesis and ensure that soft tissue was not impinged.

Subsequent to approval, the supra-structure was milled in commercially pure titanium (Figure 13). Precision of fit was verified intraorally and found to be exceptional. In general, the bars were less bulky than in some other systems we had considered.

Locator attachments were placed per the design by the technician (Figure 14). A prosthesis using a high-impact acrylic denture base10 and wear-resistant, highly cross-linked teeth11 (Lucitone 199, Portrait IPN) was created to go over the bar. Because the patient was in Class I occlusion, balanced occlusion was chosen for maxillary and mandibular teeth, in a bleached shade (PW2). The restorations on a model are shown in Figure 15 and Figure 16. The final patient situation is also illustrated in frontal and profile views in Figure 17 and Figure 18. Aside from some vestibular spot adjustment, the prosthesis fit was satisfactory. The patient was also very happy with the result.

Implant restorations can be challenging, and any technologies that enhance clinical and practice predictability are advantageous. In our opinion, the service-based CAD/CAM approach as a foundation to this restorative process yielded superior results to cast bars in terms of its straightforward workflow and excellent fit. While this is a premium treatment, cost and inventorying of components were less of an issue because the abutments are integrated into the design. The treatment team and the patient were very satisfied with the result. 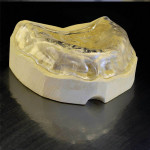 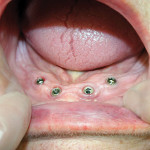 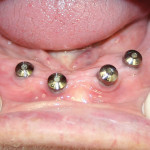 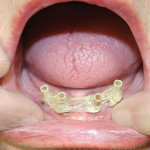