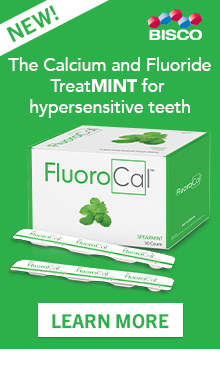 Treating a severely worn dentition presents many challenges for the restorative dentist. In cases of severe attrition, compensatory eruption of the teeth often occurs, and restoration requires orthodontic repositioning or intrusion of the teeth or increasing the vertical dimension of occlusion (VDO). While dentists historically have been concerned about patients’ tolerance for an increased vertical dimension, this change, when properly planned and executed, can be accomplished with excellent adaptation and high patient acceptance.1

In addition to the restorative challenges in such cases, many patients have financial limitations that preclude these extensive treatment plans. Without treatment, the teeth may become no longer restorable, which could result in the patient losing teeth. This article presents an approach that spreads out the costs, potentially over several years, while still obtaining an ideal end result. Using laboratory-fabricated composite overlays, a stable occlusion can be created relatively inexpensively. Definitive crown-and-bridge work can then be done segmentally as the patient is able to financially proceed.

A 55-year-old man originally presented to the dental clinic in 2006. Due to his severe wear, full-mouth reconstruction was discussed; however, the patient said cost was an obstacle, and he decided to see another dentist. The patient returned in 2014, and, at this point, he was aware of continued wear and had a greater determination to proceed with treatment. He was unhappy with the short appearance of his teeth (Figure 1 through Figure 4) and specifically noted that he could not bite into foods such as apples.

The patient was a former smoker with slightly elevated blood pressure. The only medications he took were a multivitamin, vitamin C, and a daily baby aspirin. His dental history indicated occasional bruxism, and he noted he occasionally wore an over-the-counter mouthguard for the condition.

Both arches showed severe wear. Full-mouth reconstruction was again discussed, and the patient agreed to treatment to be rendered over several years to ease the financial burden.

A thorough workup is essential to obtain the correct diagnosis. Increasing the VDO requires a detailed analysis and meticulous planning. A systematic approach to data analysis and treatment planning provides the best opportunity for a successful outcome.

Periodontal: The patient presented with probing depths of 2 mm to 3 mm, with slight bleeding on probing. He had good home care and oral hygiene. Bone levels were consistent with an AAP type 1 diagnosis.
Risk: Low
Prognosis: Good

Biomechanical: Severe attrition was noted throughout the patient’s dentition, and he was missing teeth Nos. 3, 13, 19, and 31, along with his third molars. Teeth Nos. 14, 15, and 30 had been restored with full crowns. Amalgam core buildups covering the cusps were present on teeth Nos. 2, 18, and 20. All unrestored teeth showed wear into dentin. Several anterior teeth had more than 50% tooth structure loss (Figure 5 and Figure 6). Tooth No. 18 had been endodontically treated and was stable, although it was structurally compromised. No active carious lesions were present. Slight erosion was present on teeth Nos. 21 and 27 through 29. The patient had a history of gastric reflux but currently had no symptoms (Figure 7 through Figure 9).
Risk: High
Prognosis: Poor

Functional: The patient presented with a Class III malocclusion with an end-to-end anterior bite. Findings from the temporomandibular joint examination were normal, ie, the joints accepted loading and mobilization tests were negative. His maximum opening and lateral movements were within normal limits. He reported no pain, joint sounds, or limitations with jaw movement. He did state that he had more than one bite. All tooth mobility measurements were normal. A diagnosis of occlusal dysfunction was made based on the wear patterns present and the dental history.
Risk: High
Prognosis: Poor

Dentofacial: With a full smile, the patient exhibited low lip dynamics and minimal tooth display in both the maxilla and mandible, which resulted in an unesthetic and aged smile. In repose, the maxillary cuspids were a negative 3 mm measured from the lip border, indicating a need for additional incisor length.2
Risk: Low
Prognosis: Moderate

The treatment goals were to create a more favorable esthetic appearance by increasing the length of the teeth while also building a stable occlusion with bilateral, simultaneous, and equal-intensity contacts.3,4 Full-coverage restorations were warranted on all teeth due to the amount of dentin exposure, previous restorations, and the need to increase the patient’s VDO. The treatment plan would be divided into three phases, primarily to accommodate the patient’s financial constraints. The recent availability of laboratory-processed resin composite overlays would allow for segmenting full-mouth rehabilitation treatment.

The patient agreed to the treatment being dispersed over 2 years. The treatment plan consisted of opening the VDO by restoring the entire maxillary arch with permanent restorations and restoring the mandibular arch with laboratory-fabricated bonded-resin composite overlays. Although the patient had severe attrition, a ring of enamel remained on all his worn teeth. This enabled bonding the overlays onto unprepared teeth quickly, resulting in a solid occlusion.

A balanced and stable bite would then be verified with an anterior deprogrammer. Because of the stability of the planned temporary restorations, the eventual replacement with crowns could be accomplished without urgency. The mandibular anterior and posterior teeth would be restored as the patient’s finances would allow. Because of the structural compromise of tooth No. 18, the long-term plan to replace tooth No. 19 was with an implant.

A wax-up of the patient’s dentition was accomplished by first determining the ideal maxillary tooth length. Incisal length was evaluated by analyzing the current tooth display in photographs of the patient smiling and in repose. By comparing tooth display from age-appropriate ideal lengths with the patient’s current tooth display, the proper amount of additional tooth length was determined.2 The patient’s maxillary cast was mounted on a Panadent PCH™ articulator (Panadent, www.panadent.com) using the Kois Dento-Facial Analyzer™ (Panadent). The Panadent™ adjustable platform was mounted opposing the maxillary cast. Once the desired amount of incisal length addition was determined, the platform was lowered to allow waxing of the additional length to the worn teeth. The amount needed to be added to the mandibular teeth was similarly calculated from photographs of the patient smiling and in repose. The pin on the articulator was adjusted to accommodate for the additions to the mandibular teeth.

After the wax-up was complete, the laboratory made clear stents (Affinity Crystal™, Clinician’s Choice, www.clinicianschoice.com) to allow for a composite mock-up (Luxatemp™, DMG America, www.dmg-america.com) to be placed in the patient’s mouth. This mock-up allowed verification of the occlusion and provided the patient with a preview of the final restorations.

The temporary mock-up was placed, and the change was dramatic (Figure 10 and Figure 11). The patient was able to keep the trial teeth in place for an extended period during his appointment. He was able to speak with them in place and actually see and feel a simulation of the final product. This resulted in the patient becoming excited and eager to proceed with treatment.

After acceptance of the composite mock-up, preparation for the maxillary final restorations and mandibular temporary restorations was promptly started. Luxatemp temporaries from the diagnostic wax-up were again fabricated in the patient’s mouth. The maxillary preparations began with the mock-up in place and serving as a depth guide for ideal reduction of the teeth. Because the patient had severe attrition, very little occlusal reduction of natural teeth was necessary. The maxillary arch was prepared for e.max® crowns (Ivoclar Vivadent, www.ivoclarvivadent.com) and two porcelain-fused-to-metal bridges to replace teeth Nos. 3 and 13.

The mandibular mock-up was removed, and an impression of the mandibular arch was taken for creation of the laboratory-processed composite resin overlays (Sinfony™, 3M ESPE, www.3MESPE.com). No preparation was necessary for the mandbular teeth. An approximation of the VDO was accomplished by placing the mock-up temporaries back on teeth Nos. 8, 9, 24, and 25 and taking a bite registration at the predetermined vertical dimension (Figure 12).

Two weeks later, the posterior maxillary crowns and bridges were cemented using RelyX® Unicem (3M ESPE) self-adhesive resin cement. The maxillary anterior teeth were bonded with 35% phosphoric acid, Prime & Bond® adhesive (Dentsply, www.dentsply.com), and Calibra™ esthetic resin cement (Dentsply). The mandibular overlays were cemented in three segments for ease of placement. The segments were first tried in to verify a satisfactory VDO. Then each mandibular segment was isolated with cotton rolls and Mylar® strips. The enamel ring of each tooth in that segment was etched with 35% phosphoric acid, then Prime & Bond was placed, and the overlays were cemented with flowable composite (Kerr Dental, www.kerrdental.com). The anterior segment was cemented first and then each posterior segment. The bite was verified with an intraoral deprogrammer to ensure that all the patient’s occlusal rehabilitation was in centric relation5 (Figure 13). Minor adjustments were made on the mandibular overlays to ensure bilateral, simultaneous, equal-intensity contacts.

The patient returned in 2 weeks for finetuning of the bite. The intraoral deprogrammer was reinserted and the occlusal contacts rebalanced as needed. The occlusion was stable and comfortable for the patient, so a determination was made to do no more treatment for 1 year, when the patient would be able to proceed financially.

While waiting for the next phase, the patient expressed a desire for slightly less overbite. The VDO was increased by adding composite to tooth No. 25 where it contacted tooth No. 8, simulating a deprogrammer stop. When the bite was opened and satisfactory to the patient, Herculite® composite (Kerr Dental) was added to the occlusal surfaces of the Sinfony overlays, which were roughened with air abrasion (PrepStart®, Danville Materials, www.danvillematerials.com), and then Prime & Bond was placed and cured. Herculite composite was added and sculpted to the tooth form at the new vertical dimension, and the occlusal contact points were then refined.

After 1 year, the VDO was unchanged, as the posterior teeth with their composite overlays remained stable. The mandibular anterior teeth were prepared for e.max crowns, which were cemented 2 weeks later using the previously described protocol.

Several more months passed before the patient was able to complete treatment. The mandibular posterior teeth were then prepared for e.max crowns, and 2 weeks later, these were cemented using the same protocol described earlier. The occlusion was again verified using an intraoral deprogrammer device and balanced for even, simultaneous, bilateral posterior contacts, with no friction in the functional envelope (Figure 14 through Figure 17). An occlusal guard was fabricated as a final step to help ensure protection for the patient’s investment.

The restorative dentist can choose multiple treatment strategies to achieve similar results. A severely worn dentition is often treated with full-mouth reconstruction. Restoring only one arch results in a high risk to the opposing teeth and may result in compromises to the occlusion. However, restoring both arches at the same time is challenging not only for the dentist but can also be a financial constraint that prevents many people from pursuing such treatment. Advances in dental materials and technology allow complex treatment to be segmented, enabling practitioners to offer this valuable service to a broader reach of the population.

The author wishes to thank Karl Wagner, CDT, of Mirror Image Dental Laboratory in Royal Oak, Michigan. Most concepts in this article are based on the teachings from the Kois Center in Seattle, Washington.