Various economic, time-efficient options in endodontic therapy are available for treating wide, flared, and/or unusual canals and re-treating flared canals. Conservation of tooth structure, minimal use of cement, and the strengthening of the core and/or remaining tooth structure when possible are critical treatment objectives. This article discusses new, progressive treatment modalities that minimize the amount of cement and composite resin needed, resulting in the conserving of remaining dentin. These modalities include the anatomic post-core, oval fiber post, individually formed fiber "bundle" post, fiber-augmented post, and accessory post techniques.

In the midst of the many advances made in restorative dentistry and implantology, a demand for endodontic treatments continues to persist. Some teeth requiring endodontic therapy present naturallywith oval-shaped, kidney bean-shaped (c-shaped), or ribbon-shaped canals (Figure 1).1Many such teeth bear these shapes after experiencing necessary endodontic access or coronal alteration (Figure 2). Some of these teeth also will be severely compromised due to the small amount of remaining tooth structure (dentinal walls), which may indicate the need for placement of a post to retain the subsequent core restoration, crown/bridge, or large Class II restoration.

Prefabricated metallic posts have been popular since the 1950s, as they provide an alternative to custom cast posts. Regardless of metallic composition, each of these two clinical techniques has its own drawbacks. The custom cast post traditionally offered a good "hand in glove" fit, often with a thin and uniform film thickness of cement, which was frequently achieved by removing additional dentin to prevent undercutting. However, this requires at least two appointments and a substantial laboratory fee while posing potentially catastrophic challenges to the remaining tooth structure by way of a mismatch in the elastic modulus. The modulus of dentin is ~18 GPa, that of dental gold is ~77, and that of base casting metal is over 100 GPa.

Prefabricated posts are available in both metal alloys and fiber-reinforced composites. Both types are produced with either a parallel shaft or a parallel coronal half and tapered apical half. In vitro studies in the 1980s suggested results that favored parallel posts over tapered. These studies were later countered with the advent of low-modulus fiber posts in the late 1980s.

This evolution has led to a trend toward fiber posts, where available.2 Pointed and tapered or double-tapered post shapes are becoming increasingly popular as opposed to parallel posts. Clinical trials of quartz and some glass-fiber posts reported good results with decementation rates equal to or better than metal posts, and there have been no reports of root fractures attributable to the posts themselves; they also showed better failure modes and statistics than metal posts.3-5

Circular parallel post systems are round from end to end and are effective only in the most apical portion of the post space. This is because most prepared post spaces demonstrate considerable flare in the coronal half. When the root canal is elliptical, a parallel-sided post will not be effective unless the canal is considerably enlarged (Figure 3).6

The scope of this article is the consideration of options to treat wide, flared, and unusual canals and the re-treatment of flared canals in a practical, economical, and time-efficient manner. Emphasis is on the conservation of precious tooth structure, the use of minimal cement, and, where possible, the strengthening of the core and/or remaining tooth structure.

Dental cement has poor mechanical properties when thick; it is meant to serve in less than 50 µm thickness.7,8 Composite core restoratives have more filler than cements and generally higher mechanical properties, 9,10 but they possess approximately half the composite strength of fiber-reinforced, factory-produced composite posts.11 Therefore, for the purpose of maximizing the potential for a stronger post/core restoration (inside and outside the root) that, according to some research, 12-14 can reinforce/re-strengthen remaining tooth structure, the authors will evaluate several clinical approaches that minimize the amount of cement and composite resin and/or result in conserving remaining dentin.

Because resin restoratives still shrink somewhat when polymerized, it is important to consider what is known as the C-factor. No clinical restorative situation involves a higher C-factor index than post cementation, which involves five bonding walls. The goal in these situations is to displace as much of any material that is capable of shrinking with longitudinal fiber material that will not shrink, with the ultimate goal being crown retention.

In 2011 an international academic group co-authored an article that, taking into account these more progressive treatment modalities, sought to recommend newer methods for categorizing the optimal treatment approach, based on the size of the post endodontic treatment coronal opening versus the area or volume of fiber post available.15 The five techniques are the anatomic post-core, oval fiber post, individually formed fiber "bundle" post, fiber-augmented post, and accessory post.

The anatomic post, sometimes called the "relined" post, is an indirect technique using a hybrid composite resin that is "pre-formed" to the surface of a prefabricated fiber post (Figure 4). When the root canal treatment is finished and the undercuts have been removed, a separating medium such as glycerin is used to lubricate the post space. The post, with composite applied to it (Figure 5), is inserted gently into the space and takes the shape of the irregular post space. It can be"spot-cured" for a couple of seconds and then removed, reseated, and spot-cured again. After final removal and confirmation of seating, the post is cured outside the canal. This technique is similar to the Duralay® cast post technique with a salt and pepper application to a plastic dowel.16,17 All surfaces must then be cleaned of the separating medium, and the polymerized assembly is oriented and cemented into place (Figure 6).

This technique requires no special materials and is highly intuitive to an experienced clinician. Grandini et al reported a very uniform film thickness of cement,18 while others such as Caceres et al noted fewer internal voids.19 Other studies have documented reduced stress transmission,20 less microleakage versus fiber post alone,21 greater bond adherence,22,23 and a reduced risk of catastrophic failures.24,25

Several prefabricated posts are available with an oval shape in the coronal section (Figure 7). Figure 8 and Figure 9 show how much cement could be displaced using a fiber post that is round at the apical end and ovoid at the coronal end. In many cases, this would seem an easy clinical solution. However, it requires an additional inventory of posts-of predetermined flare and diameter-and the oval space must be made to accommodate the oval posts, or vice versa.

In the 1990s, individually formed posts using "bundles" or strips of polyethylene or glass fibers  (eg, Ribbond®, Ribbond, ribbond.com; FibreKor™, Pentron, pentron.com; EverStick®, GC America, gcamerica.com) were introduced as an alternative to prefabricated fiber posts.These low-modulus materials meet the necessary mechanical compatibility factor and yield high survival rates.30 Also, in vivo testing has revealed a tendency for reduced microleakage compared with metallic and zirconia posts.31,32 In an in vitro study by Azeem et al, the individually formed "bundle" approach provided higher fracture resistance than a popular preformed fiber post in oval-shaped canals.33 Al-Tayyan et al showed their retention comparable to a prefabricated fiber post.34 However, a 3-year clinical trial showed significantly higher survival rates for the teeth restored with a quartz glass fiber post compared with those restored with the polyethylene bundle post alone, but with similar failure modes.35 Managing the fibers in this technique, however, can be technique sensitive, as the fibers tend to wrap around instruments, not stay where they've been placed, and otherwise resist the dentist's attempts to pack them into the canals. These materials have a very low fracture/flexural strength compared with prefabricated fiber posts.

The fiber-augmented post technique, which first appeared in the mainstream literature in 2000,36 has been described in both a direct and a direct/indirect version. The technique mimics the anatomic post technique described earlier but uses unidirectional, pre-wetted reinforcing fiber to displace the composite. It is well known that the addition of fibers to composite resin improves the resin's mechanical properties. (Unfortunately, when these fibers are left exposed on the surface it presents esthetic and other problems.) The drawbacks are generally subjective: some clinicians find bundled fibers more difficult to handle and insert than the more rigid accessory posts. The direct fiber-augmented post technique is illustrated in Figure 10 through Figure 12.

The accessory post technique has been in the literature since 2007. Posts in this technique are made from the same materials as full-sized fiber posts, with the same elastic modulus and radiopacity, with the elastic modulus ranging from 13 GPa to 50 GPa, (calculated at 30 degrees), and the radiopacity possibly reaching six times that of aluminum, depending on brand and post diameter. The accessory posts available on the market measure 0.5 mm at the apex and 0.8 mm at the coronal end and are tapered.

For widely flared and/or unusually shaped canals, the apical end of the space is prepared for the "master" post, as usual, with drills provided. During the trial fit, accessory posts also can be inserted to predetermine quantity, placement location, and even length. Once the cement is appropriately placed, the master post is inserted into place, followed immediately by the accessory posts (Figure 13).

More published data support this technique than the previous four approaches. The accessory post technique has been shown to minimize the cement thickness and volumes subject to shrinkage phenomena and reduce contraction or C-factor-related stress on the internal surfaces.39-41 This can lead to higher bond strength and better bond survival.42

The technique results in restored flared canals (extracted teeth) with flexural strength similar to cast post but with much improved failure modes.43-47 The use of accessory posts with a master fiber post showed fracture resistance higher than oval or round posts by themselves,38,47-49 cement or composite alone,50 and relined/anatomic post.51 Other examples of this technique are shown in Figure 14 through Figure 26.

Evolved technology in adhesives and composites, along with innovations in fiber reinforcement now afford the clinician numerous options for restoration of severely compromised teeth that previously would have been considered doomed to extraction, or subjected to threat of antiquated, labor-intensive, unesthetic restorative techniques such as custom cast posts and/or retention pins. C-factor management in root canals is critical to establishing and maintaining a robust dentin bond that will survive years of stress and strain. This article has presented evidenced-based techniques for assessing C-factor in canals and prescribing treatment modalities that will eliminate or minimize its efforts. Techniques that are effective and can be performed in a timely manner will help the modern dentist.

7. Burgess JO, Ghuman T. A practical guide to the use of luting cements. Academy of Dental Therapeutics and Stomatology. 2008:1-11. 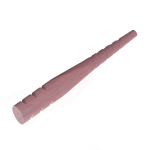