This case report demonstrates the importance of systematic risk assessment and appropriate treatment planning for restorative success with a patient with Class II, Division 2 malocclusion. The overall objective was to change the functional relationship of the anterior teeth to allow predictable restoration that would decrease the risk of further attrition while satisfying the esthetic expectations of the patient. Orthodontics prior to restoration was the key to minimizing biomechanical and functional risks. The case illustrates the use of the interincisal angle measurement to provide an objective guide when evaluating and planning for proper anterior function.

Understanding anterior guidance and how it affects the envelope of motion remains elusive to both restorative dentists and specialists. The Class II, Division 2 dental malocclusion with the classic retro-inclination of the upper incisors can be one of the most difficult restorative challenges faced in practice. The restorative result can be disastrous if the pitfalls associated with a lack of thorough evaluation are not recognized and correctly addressed in the treatment plan. This case report illustrates the use of the interincisal angle measurement to provide an objective guide when evaluating and planning for proper anterior function and case success.

Patient History and Chief Complaint: The patient, a healthy, nonsmoking, 54-year-old registered nurse, stated that her chief concern was to improve her bite and tooth alignment (Figure 1), including moving the front teeth forward. She also said she did not like her smile, particularly the retruded, short, and jagged appearance of her front teeth, which, she had noticed, were chipping and becoming shorter (Figure 2). She was concerned that her situation would worsen with time. The examination revealed a Class II, Division 2 malocclusion with excessive attrition on the maxillary and mandibular incisors, which was accompanied by an unesthetic gingival display.

The medical history was non-contributory and there was no history of excessive erosion. The patient had received orthodontic treatment as a teenager that included extraction of all four first premolars with space closure. She had been receiving regular dental care, and the existing restorative dentistry was of relatively good quality.

Periodontal: Periodontal examination showed good bone support with probing depths ranging from 2 mm to 3 mm, with only slight bleeding on probing. There was minimal gingival recession or abrasion. The diagnosis was AAP type II.

Biomechanical: The triangular-shaped anterior teeth had no restorations and were free of caries. The anterior teeth had a large amount of attrition, which reduced the mesio-distal width of these teeth. This caused a reduction in arch perimeter size, placing the roots of the incisors in closer proximity than normal.

All posterior teeth had existing restorations with a mixture of porcelain-fused-to-metal (PFM) crowns, gold crowns, and large amalgam restorations. The crowns appeared to be clinically acceptable. The amalgam restorations were all defective, and recurrent caries associated with their breakdown was apparent. Due to the large intra-cuspal width of the amalgams and the existing full-crown restorations, all posterior teeth were deemed to be structurally compromised. There was no apparent pulpal pathology or suspicion of chemical erosion (Figure 3 and Figure 4).

Functional: The malocclusion was classified as Class II, Division 2 characterized by the upright and retroclined position of upper central incisors in conjunction with excess vertical overbite and an excessive interincisal angle. There was moderate to severe attrition of the incisors and canines in both arches. No reports of temporomandibular joint dysfunction or history of bruxism or clenching were noted.

The destructive nature of excessive anterior guidance does not always have associated symptoms that are easily recognized, but the initial observations seemed to indicate some interfering restriction associated with the envelope of function, the necessary scope of lower incisor movement used in the chewing function.1 The more retroclined the upper incisors, the larger the interincisal angle is likely to be. This results in a more vertical and restrictive envelope of function, as dictated by the contact pattern of the lower incisal edges to the lingual surface of the upper teeth. As the lower incisal edges move away from maximum closure, the force vector changes from a mostly vertical direction to a more horizontal orientation, and the strength of the force between upper and lower teeth increases. If the interincisal relationship is restrictive, the result may be aggressive attrition of the anterior teeth. The obtuse interincisal angle also allows continued supra-eruption of the incisors with overbite deepening and continuation of the cycle.

Cephalometric measurement of the interincisal angle provides valuable information in treatment planning and can help demonstrate the importance of orthodontically modifying the anterior tooth relationship prior to restorative treatment. An interincisal measurement of 125 to 135 degrees is considered to be an acceptable range of functional biocompatibility.2 This patient’s interincisal angle measured 165 degrees on the pre-treatment cephalometric analysis (Figure 5).

The patient’s functional risk was significant due to the excessive interincisal angle, which is characteristic of the Class II, Division 2 malocclusion. The attrition and supra-eruption of the anterior teeth were at risk of accelerating throughout the life of the patient.

Dentofacial: Dentofacial analysis revealed moderate lip dynamics. Gingival levels were uneven due to differing amounts of attrition and supra-eruption within the upper and lower anterior segments. Mildly excessive gingival display was present in the upper anterior with lingual inclination of the posterior teeth, resulting in a lack of fullness in the buccal corridors that was evident with smiling.

A classic two-plane occlusion was noted with the anterior teeth supra-erupted as a result of this lack of opposing occlusal contact (Figure 6). The mandibular incisal segment had extruded and needed to be altered (intruded) to be level with the posterior occlusal plane. It was apparent that the anterior teeth required leveling. The Kokich method3 of determining the relative intrusion necessary for the correction of the overbite was used, and it was determined that the lower anterior teeth would require more intrusion than the upper. The goal for treatment was to optimize the gingival levels and to minimize the need for crown lengthening in order to keep restorative margins in enamel.

The retroclined maxillary incisal position was a major concern for the patient, who desired more lip support. The inclination, therefore, needed to be altered both for esthetics and function.

The treatment goals were to:

• stabilize the occlusion by altering the functional relationship of the anterior teeth to achieve a more ideal interincisal angle and a functional envelope free of constriction
• orthodontically position the teeth to accommodate the placement of minimally invasive restorations of an esthetically pleasing height-to-width ratio
• improve gingival symmetry
• restore biomechanically compromised teeth, and eliminate caries by restoring teeth with recurrent lesions

Achievement of these goals would meet the overall objective of changing the functional relationship of the anterior teeth to allow predictable restoration that would lessen the risk of further attrition while satisfying the esthetic expectations of the patient.

A plan of treatment was developed to stabilize and restore the unstable and unesthetic Class II, Division 2 malocclusion. Orthodontics prior to restoration was the key to minimizing biomechanical and functional risk. The anterior teeth could simply not be restored in their preoperative position without excessive removal of tooth structure, which would significantly increase the patient’s biomechanical risk. The prepared teeth would very likely require endodontics and have a lack of adequate ferrule.4

A Kois deprogrammer was used to determine if there was a dysfunctional component in the posterior occlusion and establish the physiologic centric relation position. The deprogrammed centric relation record showed a physiologic position that was slightly anterior to the patient’s maximum intercuspal position, which indicated potential encroachment on the envelope of function due to the steep incisal guidance. There was no apparent posterior dysfunction.

A fully bonded edgewise orthodontic appliance (Unitek MBT™, 3M Unitek, https://solutions.3m.com) was placed using an indirect technique for accuracy (Biostar®, Great Lakes Orthodontics, www.greatlakesortho.com). The upper and lower anterior teeth were intruded to the optimal intra-arch gingival height relationships using the patient’s smile line as a reference. Orthodontically correcting the gingival asymmetry facilitated the placement of restorative veneer margins in enamel. The upper and lower anterior teeth were moved forward by opening the first premolar extraction sites, with lingual root torque applied to anterior teeth in order to increase lip support and gain an acceptable interincisal angle. Once the perimeter of the arch was established and the interincisal angle verified, the anterior teeth were spaced according to the appropriate proportions for restoration as specified by the restorative dentist (Figure 7).

When it was determined that the teeth were correctly positioned, the removal of orthodontic appliances was coordinated with the restorative preparation. The patient was de-banded in the morning, and preparation and provisional restorations were completed the same day. The patient returned to the orthodontic office as needed for fabrication of 1-mm molded clear acrylic retainers (Biostar) to be used throughout the restorative phase. Continued use of this type of retainer was planned since there was no evidence of bruxing, although placement of a nightguard could be considered in the future for long-term retention and occlusal protection, if needed.

Near the end of orthodontic treatment, study casts and mounting were done using the Kois Panadent dento-facial analyzer (Panadent, www.panadent.com) and Kois deprogrammer. It was determined that an increase in vertical dimension of approximately 1 mm in the posterior would provide the required restorative space and optimize the position and length of the anterior teeth. A wax-up and provisional stents were fabricated from this mounting (Figure 8).

On the same day the orthodontic brackets were removed, upper and lower anterior teeth were prepared (Nos. 6 through 11 and Nos. 22 through 27) for minimally invasive feldspathic porcelain veneers. The case was provisionalized with bis-acryl resin on all the teeth at the new vertical dimension. Space provided by the increase in vertical dimension allowed provisionalization without preparation of the posterior teeth. This was accomplished using a polyvinylsiloxane (PVS) stent made from the wax-up (Figure 9). The prepared anterior teeth were etched in a single spot on the mid-facial surface. Bonding resin was applied and light-cured. The unprepared posterior teeth were roughened using a PrepStart™ system (Danville Materials, www.danvillematerials.com) with 27-micron aluminum oxide particles at 60 lbs pressure. The roughened teeth were coated with bonding resin and the resin was cured. The stents were then loaded with provisional resin (TurboTemp, Danville Materials) seated over the teeth and allowed to set.

Esthetic laser crown lengthening was performed at the time of veneer preparation on teeth Nos. 7 through 9 using an Er,Cr:YSGG laser to establish esthetic gingival contours. On the following day, the patient returned to the office for refinement and approval of the anterior provisionals.

At the next appointment, all anterior veneers were bonded to enamel. The occlusion was verified to hold shim stock at the canines and have proper clearance of the incisors in maximum intercuspation. On this same day, the maxillary posterior teeth (except Nos. 1 and 16) were prepared for new full-coverage metal ceramic crowns with porcelain facial margins and re-provisionalized. Upon preparation of tooth No. 14, it was determined that this tooth had a necrotic pulp and the patient was referred for endodontic treatment, which was completed prior to cementing the maxillary posterior crowns.

On the same day that the maxillary posterior crowns were cemented, the mandibular posterior teeth (Nos. 18 through 20 and Nos. 29 through 31) were prepared for new full-coverage metal–ceramic crowns and re-provisionalized. The mandibular third molars had small occlusal pit caries and were restored with composite resin.

Finally, the mandibular posterior crowns were cemented and the occlusion verified. The occlusion was checked and refined again a few days later. The patient then returned to the orthodontist for final retainers (Figure 10 and Figure 11). Results of the case are shown in Figure 12 through Figure 14.

Without the coordinated efforts of an interdisciplinary team approach, attaining the highest level of restorative treatment quality for patients who present with a functional malocclusion is often not possible. Systematic risk assessment and treatment planning to reduce areas of higher risk are crucial to establishing long-term restorative success.

All laboratory support and ceramics were made by Opus One Laboratories, Agoura Hills, California. 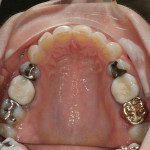 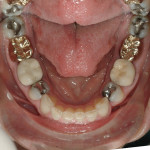 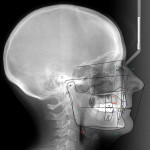