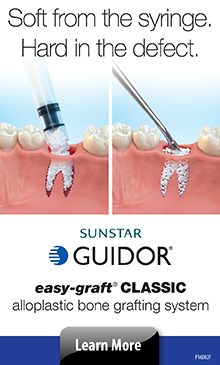 Abstract: Periapical and bitewing radiographs lack the sensitivity to reliably diagnose horizontal root fractures, and, therefore, asymptomatic teeth with root fractures may remain undetected for years. This article reports a case in which a patient presented with a mucogingival defect on tooth No. 24 with no apparent history of dental trauma. During a free gingival graft procedure, a horizontal root fracture was observed in the apical third of the aforementioned tooth. After the clinician communicated this finding to the patient, the patient recollected two instances of trauma that had occurred to this area more than 30 years earlier. The presence of the horizontal root fracture did not affect the postoperative healing from the mucogingival procedure, and the tooth remained stable at the 1-year follow-up.

Cone-beam computed tomography (CBCT) imaging offers advantages over 2-dimensional radiographs when diagnosing horizontal root fractures, especially oblique fractures occurring in the middle and apical thirds of the root.4 CBCT has been demonstrated to have higher sensitivity than conventional radiographs5 and can facilitate diagnosis of a suspected fracture that might have an impact on treatment options, such as endodontic therapy or splinting. However, CBCT is not yet considered the standard of care for root fracture diagnosis,6 and clinical methods, such as an exploratory gingival flap surgery to visualize the defect, still might be required.

Timely diagnosis and treatment within 24 hours of injury affects teeth prognoses.7 However, numerous case reports have noted spontaneous fracture healing. Horizontally fractured maxillary and mandibular incisors in separate patients diagnosed using CBCT and then imaged after recovery demonstrated healing with connective tissue, or a combination of connective tissue in bone, respectively.8 Routine radiographic or CBCT examinations also have detected previously undiagnosed horizontal fractures that were never treated but healed asymptomatically and with vitality.9-13

Mucogingival conditions are deviations from the normal anatomic relationship between the gingival margin and mucogingival junction. Common mucogingival conditions are recession, lack of keratinized gingiva, and probing depths extending beyond the mucogingival junction.14 Infection, trauma, and developmental factors can contribute to these defects.14 Treatment may be considered when there is risk for progressive loss of periodontal support.15 Risk factors include the presence of plaque, bleeding on probing, high frenal attachments, lack of keratinized gingiva, thin gingival biotype, periodontal disease, root sensitivity, traumatic toothbrushing habits, smoking, and orthodontic tooth movement that bodily moves or tips the tooth/teeth out of supporting alveolar bone.15 An increase in root coverage and regeneration of keratinized tissue may be achieved with combinations of a connective tissue graft, a coronally advanced flap, or a free gingival graft.16 Pedicle graft procedures, allografts, guided tissue regeneration, and biologics also may be utilized.

In this report, a case is presented in which a healed horizontal root fracture in a mandibular central incisor was found during periodontal surgery for correction of a mucogingival defect.

In November 2016 a 59-year-old woman was referred to a periodontist (LMY) in private practice. The patient's chief complaint was that her "gums are receding" and she was "afraid of losing my teeth." Her dental history included three phases of orthodontic treatment: once during adolescence and twice as an adult. Orthognathic surgery was performed with the third orthodontic treatment to correct occlusion and sleep apnea. The patient habitually wore her maxillary and mandibular removable retainers at night, and there was no history of bruxism. She was compliant with biannual dental examinations and adult prophylaxis appointments with her general dentist.

Her medical history included hypothyroidism, which was controlled by liothyronine, and osteoporosis, which had been previously treated with Actonel (risedronate sodium) (discontinued 1999) and Reclast (zoledronic acid) (discontinued 2013). There was no history of smoking.

A comprehensive periodontal examination revealed generalized 3 mm to 4 mm horizontal bone loss with minimal probing depths, mobility, and furcation defects. Generalized 3 mm to 4 mm gingival recession with a minimum 2 mm width of attached gingiva was measured at all teeth and sites except the buccal surface of tooth No. 24, which had 6 mm of gingival recession, probing depths between 1 mm and 2 mm at the buccal and lingual aspects, 0 mm of attached gingiva, bleeding on probing, and plaque accumulation (Figure 1). Tension placed on the mandibular frenum caused blanching of the gingival margin of No. 24.

The patient had no esthetic or sensitivity concerns, but she was motivated to maintain her periodontal health and concerned that the gingival recession would progress. Tooth No. 24 was diagnosed with a Miller class III mucogingival defect17 and treatment-planned for a mandibular frenectomy with free gingival grafting.

On the day of surgery, after local anesthesia was administered, the mandibular frenum was removed and a partial-thickness flap was reflected along the mucogingival border starting at tooth No. 25 distal and ending at tooth No. 24 distal; the partial-thickness flap was apically extended using sharp dissection with a #15C blade. Upon reflection, a suspected horizontal root fracture was noted in the apical third of tooth No. 24 (Figure 2). The fracture line was filled with a calcified material that could not be penetrated with the #23 explorer. The root subsequently was debrided and root-planed. A 10-mm x 15-mm free gingival graft obtained from the upper right palate was trimmed to cover the buccal defect at No. 24 and sutured with 6-0 polypropylene sutures (Figure 3). The donor site was sutured with 4-0 chromic gut in conjunction with use of an acrylic surgical stent.

No postoperative antibiotics were given. Because the patient was unable to tolerate nonsteroidal anti-inflammatory medication, over-the-counter acetaminophen was recommended as needed for pain. She was instructed to avoid the mandibular anterior teeth when performing routine oral hygiene and while eating.

After review of the postoperative instructions, the patient was informed of the presence of the horizontal root fracture on tooth No. 24 that was incidentally discovered during surgery. Although the patient reaffirmed the asymptomatic history of the tooth, she was not surprised that a fracture was detected, as she immediately recalled two instances of trauma to her anterior mandible as a teenager, one involving a significant motor vehicle accident. However, she never experienced pain or sensitivity in the mandibular anterior region, nor did she ever have pain localized to tooth No. 24 since the time of trauma.

At a 2-week follow-up appointment uneventful healing was evident at both donor and recipient sites (Figure 4). The sutures were removed at this visit. Vitality testing was completed at teeth Nos. 23 through 26, and all were vital without lingering pain.

Periodontal examination 8 weeks postoperatively (Figure 5) revealed regeneration of the keratinized tissue, elimination of the frenal pull, and a 1 mm decrease in recession at tooth No. 24. Probing depths remained between 1 mm and 2 mm without bleeding on probing. Radiographic analysis (Figure 6) verified a lack of periapical radiolucency or other pathology associated with No. 24 and reinforced the fact that mucogingival treatment did not affect tooth vitality or the healed horizontal fracture site.

Due to an asymptomatic patient recovery without loss of vitality in conjunction with apparent hard-tissue healing of the root fragment, annual periodontal re-evaluation was advised. After 1 year, clinical and radiographic parameters were identical to those observed after 8 weeks, and the patient remained asymptomatic.

Healing between root fragments with hard-tissue formation and a favorable prognosis are associated with a younger age, immature root formation, and a vital pulp at the time of trauma.18 Prognosis also is improved with stability of the coronal fragment and minimal fragment separation.18 Four different types of healing have been described: a hard-tissue union; a combination of hard- and connective-tissue union; connective-tissue union only; and non-union with radiolucency associated with the fracture line, possibly indicative of the lost pulpal vitality of the coronal fragment.19 These variations are similar to healing types following luxation injuries. Similarly, it has been suggested that intra-alveolar fractures are a variation of a luxation injury, because in a root fracture the coronal segment is displaced.20

In this case, diagnosis of the horizontal root fracture, which may or may not have been a complete fracture at the initial trauma, was not made until more than four decades after the suspected traumatic incident(s). However, it has been demonstrated that treatment, such as splinting, is not required if the distance between fractured segments is less than 1 mm.7 In this case, root development was complete at the time of the suspected injury, and vitality of the pulp was maintained, which may have enhanced the spontaneous healing of the root fracture with hard tissue.

The authors are unaware of other reports involving a horizontal root fracture diagnosis made during mucogingival surgery. The lack of keratinized tissue localized to tooth No. 24 was consistent with the frenal pull present at initial examination, and without symptoms or significant probing depths in this area a root fracture was not suspected. Following periodontal surgery, the tooth maintained vitality, remained asymptomatic, and healed with minimal probing depths.

This case confirms that horizontally fractured roots may spontaneously heal and treatment is not always required to facilitate repair. Although there is no way to confirm whether the mucogingival defect in this case was associated with the root fracture, the frenal attachment, or a combination of both, root fracture should be considered as an etiologic factor in the differential diagnosis of mucogingival defects.