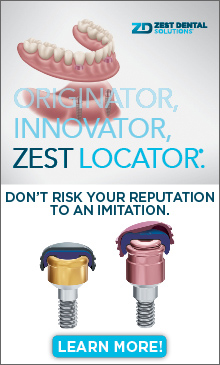 Dental Implant Therapy in Patients with a History of Periodontitis: A Literature Review and Clinical Considerations

Dental implants have become widely recognized as a treatment modality in patients with tooth loss. As an increasing number of patients receive implant therapy to replace missing teeth due to periodontal disease, the question arises as to whether the outcome of dental implants is influenced by a history of periodontitis.1 This patient population is believed to carry an increased risk for implant failure, increased probing depths, and progressive bone loss around implants.2-4 Because inflammatory periodontal disease is regarded as a leading cause of tooth loss in the adult population, the issue in regards to successful implant placement becomes a major consideration for the clinician in treatment planning patients with a history of periodontal disease.5

The literature currently indicates no significant difference in the rate of implant survival between patients with a history of periodontitis and periodontally healthy individuals after 5-year follow-up; however, studies show that patients with a history of periodontitis manifest greater probing depths, more marginal bone loss surrounding implants, and a higher incidence of peri-implantitis.6,7 With carefully monitored supportive periodontal therapy (SPT) and proper management, clinical studies show implant survival at 5- and 10-year follow-up to prove dental implants to be a successful treatment modality with a predictable outcome.2

Periodontitis comprises a variety of pathologic conditions that affect the health of the periodontium and is commonly seen in its chronic form.8 In general, patients exhibit gingival inflammation with destruction of tooth-supporting structures including the periodontal ligament, connective tissue, and bone.8,9 Aggressive periodontitis (AP) forms are characterized by rapid attachment loss and alveolar bone destruction in otherwise systemically healthy individuals.10 It has been suggested that patients with aggressive forms of periodontitis are at higher risk for implant failure in comparison to their chronic counterparts.2 Al-Zahrani et al demonstrated 5-year survival rates of 89% in AP patients undergoing SPT; however, bone loss occurred more often in these patients in comparison to patients with chronic periodontitis and periodontally healthy individuals.10

Numerous studies have indicated the composition of bacteria associated with chronic periodontitis and peri-implantitis to be similar, with predominantly gram-negative anaerobes.6,11 Shibli et al demonstrated that implants associated with peri-implantitis showed the same bacterial composition associated with healthy implants; however, higher quantities of bacteria were found at the diseased sites.6,12,13 In partially edentulous patients, periodontal pathogens have been shown to translocate from periodontally involved teeth to the sulcus surrounding implants in the partially edentulous patient.8,14 This highlights the importance of supportive periodontal therapy and treatment of involved teeth prior to the placement of dental implants. With this in mind, extraction of hopeless teeth, ridge augmentation, and possible socket preservation may lengthen treatment duration prior to implantation. Furthermore, the presence of periodontal inflammation and periapical lesions often delays the placement of bone grafts and further placement of implants. 15,16

Supportive periodontal therapy was shown to be an effective method of periodontal maintenance when placing implants in patients with chronic periodontitis. Roccuzzo and colleagues demonstrated successful management of implants, with a survival rate of 94.7% in 15 of the subjects with a history of advanced periodontitis who were maintained and treated periodontally before implants were placed.23 A lack of compliance to SPT was correlated with a higher incidence of marginal peri-implant bone loss at follow-up as well as an increased incidence of implant failure. Furthermore, a higher implant survival rate was observed in the mandible (96.2%) than in the maxilla (93.5%).23

Supportive periodontal therapy, defined as regular visits to the clinician for periodontal control and maintenance, formed the basis of long-term success after periodontal implant placement.25 SPT was shown to be an effective method in maintaining implant success and preventing periodontitis recurrence. All patients revealed improvement in plaque control, with statistically significant differences between initial plaque scores and 10-year follow-up values.23 Patients with chronic periodontitis who did not completely adhere to SPT demonstrated a higher incidence of implant loss.23

Prophylactic antibiotics are frequently administered prior to placement of implants to minimize the risk of infection. Amoxicillin is commonly prescribed pre- and postoperatively in addition to a chlorhexidine rinse. Studies have shown an increased incidence of infection after implant placement in periodontitis-susceptible individuals.26

Currently, innovative methods exist for the clinician in screening patients for increased risk factors for periodontal disease. Among them are salivary diagnostic tests, which evaluate the composition of individual saliva samples, indentifying individual genetic susceptibility to periodontal disease by evaluating samples for high-, moderate-, and low-risk pathogens, as well as interleukin-1 alpha (IL-1α) and IL-1β, potential inflammatory mediators associated with periodontal disease.27 The assessment of salivary composition aids the dental clinician in determining periodontal disease types, therapeutic treatment options, and whether the need for more aggressive treatment is required. The effectiveness of salivary diagnostic tests, however, has yet to be elucidated.

In reviewing the literature, there has been no appropriate scientific evidence to conclude definitively that individuals with a previous history of periodontitis demonstrate increased failure rates when rehabilitated with dental implants. Many studies lacked control groups when reporting implant survival rates in periodontal patients, and sample sizes were frequently small and possibly not large enough to detect significant values. Variables such as whether implants were single units or multiple-unit bridges, and whether placement was immediate or delayed were frequently not reported. The current literature should be interpreted with caution, as further research is necessary to ascertain the role of risk factors in the progression of periodontal disease.

With proper management and patient compliance, the literature suggests that clinically acceptable results can be achieved when placing dental implants in patients with a history of periodontitis. However, there is a need for stronger evidence in the form of longitudinal studies in much larger samples in the future.

5. Nevins M, Langer B. The successful use of osseointegrated implants for the treatment of the recalcitrant periodontal patient. J Periodontol. 1995;66(2):150-157.