Take Charge of Your Patients’Dentinal Sensitivity

Dentinal sensitivity has a significant prevalence in the general population and an even higher occurrence in periodontal patients. It is typically associated with exposed root surfaces, with the buccal cervical areas of bicuspids and canines most commonly affected.1 According to Brannström’s theory,2 the short-duration sharp pain associated with it occurs following exposure to stimuli (hot/cold/sweet/sour/touch). After this, fluid movement occurs within exposed open dentinal tubules, causing myelinated nerve fibers to send signals to the brain that result in pain. While general sensitivity is usually managed with a desensitizing dentifrice, localized sensitivity can readily be treated with a professional product.

Initially the coating of Enamel Pro Varnish sets to form a physical barrier that covers and protects the exposed dentin, giving immediate relief. This physical barrier may also be particularly useful if the sensitivity would cause a patient to avoid other treatments or where treatment of an adjacent area not requiring use of local anesthetic would stimulate fluid movement within the dentinal tubules at the site of the exposed dentin. By first applying Enamel Pro Varnish, discomfort can be prevented.

After applying Enamel Pro Varnish, fluoride ions are released from the varnish and provide for tubule occlusion through the precipitation of calcium fluoride crystals in the dentinal tubules (Figure 2). This tubule occlusion provides for longer-lasting sensitivity relief after the varnish coating is no longer present. In addition, ACP has the potential to relieve dentinal sensitivity, and its use in products has been shown to result in deposition of hydroxyapatite. Enamel Pro Varnish has an esthetic appearance, is well accepted by patients, and is based on studies supporting fluoride uptake, fluoride release, and diminished hydraulic conductance.3-5

Application is quick and easy, following these steps:

2. Mix the unit dose with the brush.

3. Apply varnish from the brush onto the sensitive areas.

4. If more sites are being treated, wipe the brush with a dry gauze square before redipping it in the unit dose, then treat additional areas.

5. If necessary, a repeat application can be applied within days or weeks.

6. For the effective treatment of dentin hypersensitivity, in most cases, two applications several days apart are sufficient.

The varnish sets on contact with saliva, providing immediate relief. Patients should avoid hot drinks and liquids, as well as drinks/foods/rinses containing alcohol, as these would dissolve the varnish. Patients must also avoid eating crunchy foods, brushing, and flossing for 4 to 6 hours while the varnish is on the tooth. The varnish may be left on for up to 24 hours if desired.

The preceding material was provided by the manufacturer. The statements and opinions contained therein are solely those of the manufacturer and not of the editors, publisher, or the Editorial Board of Inside Dental Assisting.

• Enamel Pro Varnish has been shown to diminish hydraulic conductance by 73%.5

• Enamel Pro Varnish provides an esthetic appearance and is well-accepted by patients.

• Enamel Pro Varnish releases fluoride ions from the varnish, which provides for tubule occlusion through the precipitation of calcium fluoride crystals in the dentinal tubules. 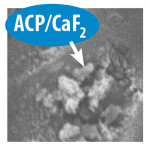