An 81-year-old male patient presented with a large gingival ulcer of 2 months’ duration. He had been taking methotrexate, a potent anti-inflammatory/immunosuppressant, for the past 50 years to treat psoriasis. A biopsy revealed diffuse large B-cell lymphoma Epstein-Barr virus positive. Remission occurred after discontinuing the medication. Clinicians noting a non-healing ulcer in the mucosal or keratinized tissue of the oral cavity of a patient on immunosuppressants should perform a biopsy examination to rule out lymphoma or other malignancy.

Methotrexate is an immunosuppressant drug commonly used in the treatment of autoimmune diseases such as rheumatoid arthritis, psoriatic arthritis, and psoriasis.1 The drug was developed in the 1950s as a chemotherapeutic anticancer drug, but was observed to clear up psoriatic patches in patients undergoing cancer treatment.2 Methotrexate exerts its effects by interfering with folic acid metabolism, preventing cell maturation and multiplication.3 It is presently considered first-line treatment of steroid-resistant psoriasis and psoriatic arthritis.4,5

Common adverse side effects of methotrexate include nausea, anorexia, stomatitis, fatigue, hepatotoxicity, and pulmonary fibrosis. One uncommon, serious side effect of long-term methotrexate use is lymphoproliferative disease (lymphoma), a potentially life-threatening condition.6 This form of lymphoproliferative disease was reported in a 51-year-old female patient with rheumatoid arthritis who had been taking weekly oral doses of methotrexate for 33 months. She presented with submandibular enlargement and radiographic changes in the lung and mediastinum. A submandibular gland biopsy revealed malignant large B-cell lymphoma. After discontinuing the methotrexate, she underwent 12 weeks of chemotherapy and afterward was in remission.7

Oral manifestations have also been reported in a 70-year-old man with a history of hepatitis B exposure, chronic obstructive pulmonary disease, coronary artery disease, hypertension, and psoriasis. He was treated with methotrexate for 2 years and did not receive any other immunosuppressant. He presented with severe weight loss, limited appetite, and alternating constipation and diarrhea. Although his condition initially improved after discontinuing the methotrexate, it subsequently worsened, even with chemotherapy, and he died 2 months after methotrexate cessation.8

An 81-year-old Caucasian man was referred to the author’s office for evaluation of a large gingival ulcer in the mandibular right premolar region (Figure 1). The lesion had reportedly been present for about 2 months and was unresponsive to topical steroids or systemic antibiotics. The pertinent medical history revealed the use of methotrexate for the past 50 years to treat psoriasis. Comorbidities included hypertension and prostatitis, which were both controlled with medication. The patient reported no allergies and did not consume alcohol or tobacco. Intraoral examination revealed an oblong ulcer about 20 mm x 15 mm extending from the distal of the mandibular right canine tooth to the distal of the mandibular right second premolar tooth.

After obtaining the necessary consent, the area was anesthetized, and a small specimen near the buccal border of the lesion was removed for biopsy examination. Because the lesion was large and a systemic etiology was suspected, an incisional rather than excisional biopsy was recommended. The initial biopsy showed only nonspecific inflammation. A second deeper biopsy was obtained, and the final pathologic diagnosis was diffuse large B-cell lymphoma (DLBCL), Epstein-Barr (EBV) virus positive, consistent with immunodeficiency-associated (methotrexate-associated) lymphoproliferative disorder. Figure 2 is stained for abnormal lymphoid tissue, while Figure 3 is stained for the presence of EBV.

The patient was referred to an oncologist for further evaluation, and methotrexate use was discontinued. He returned to the author’s office 1 month after the initial visit, about 3 weeks after discontinuing methotrexate, and the area was significantly improved (Figure 4). Subsequent follow-up visits did not show recurrence.

Viral infections from the Herpesviridae family include herpes simplex virus (HSV types 1 and 2) and EBV. (Cytomegalovirus and Varicella zoster virus are also in this family but outside the scope of this report.) HSV-1 is primarily associated with blisters referred to as cold sores, or herpes labialis, on the lips. HSV-1 can cause an infection for the lifetime of the host as a primary, latent, recurrent, or persistent infection.9 HSV-2 is associated with genital herpes, but both strains can cause lesions at either site.10

EBV is one of the most ubiquitous viruses, infecting more than 90% of the world’s adult population. Immunosurveillance by a healthy individual keeps the virus in check. Infectious mononucleosis is one of the representative, and usually benign, diseases associated with EBV.11 Age-related and drug-related compromised immunity can cause EBV reactivation, resulting in lymphoproliferations and lymphomas seen as B-cell lymphoma, Hodgkin’s lymphoma, and non-Hodgkin’s lymphoma.12 Non-Hodgkin’s lymphoma accounts for 90% of occurrences, and Hodgkin’s accounts for 10%.13

DLBCL is the most common type of malignant lymphoma in the Western world.14 It is commonly classified as affecting the lymph nodes (nodal) or other organs in the body (extranodal), usually the gastrointestinal tract.15 In a retrospective review of 554 patients diagnosed with diffuse B-cell non-Hodgkin’s lymphoma, the median age was 48.7 years (+/-15.3 years). The male-to-female ratio was 2 to 1. The primary site distribution for nodal non-Hodgkin’s lymphoma (N-NHL) was 58%. Extranodal (EN-NHL) site distribution was 42%. The median survival rate was 4.8 years and 6.3 years in N-NHL and EN-NHL, respectively. Factors associated with good prognosis were age less than 60 years, early stage (I-II) extra-nodal involvement, primarily gastric or bone, and lack of symptoms.16

Oral manifestations of lymphoproliferative disease (lymphoma) are extremely rare.1 Spontaneous remission of lymphoma after discontinuing methotrexate has been reported; some patients responded by discontinuing methotrexate alone while others required chemotherapy.17-19 Dojcinov studied 26 patients who developed EBV-positive lymphoproliferative disease as a result of various sources of immunosuppression, including 17 patients who had age-related immunosuppression. Twenty-five percent of the patients required chemotherapy, 45% regressed spontaneously, and 15% experienced remissions and relapses.20 The patient in this case report demonstrated marked clinical improvement of his gingival ulcer within 3 weeks of methotrexate cessation without additional treatment.

The patient presented here developed a condition referred to as DLBCL, including activation of a latent EBV infection. Hasserjian et al studied a series of 18 patients with immunosuppressant-related lymphoproliferative disease. Two of these patients developed EBV-negative B-cell lymphoma after methotrexate use and were successfully treated with anticancer medication.21 The patient presented here had DLBCL, EBV positive, but did not require chemotherapy.

Methotrexate is a potent immunosuppressant used to treat psoriasis, psoriatic arthritis, and rheumatoid arthritis. The side effects are usually tolerable, but occasionally severe myelosuppression can cause life-threatening lymphoproliferative disease. When a non-healing ulcer is noted in the mucosal or keratinized tissue of the oral cavity of a patient on immunosuppressants, the clinician should consider biopsy examination to rule out lymphoma or other malignancy. 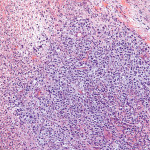 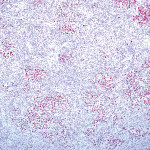