Michael J. Scoles, DMD takes issue with companies that call their bonding products “universal” just because they are single-bottle systems. The Renton, Washington, private practitioner says he considers so-called universal products that require a different bottle and a different protocol for each of numerous different procedures confusing and inconvenient. “To me, ‘universal’ describes a product that works the same for every instance, whether a sealant, Class V restoration, porcelain restoration, PFM, or veneer.”

Scoles, who has been using Kerr’s two-bottle OptiBond™ XTR system for 3 years, refers to the reliable XTR as “Groundhog Day”—a reference to the popular movie of that name—because “it’s the same for every procedure we do.” This protocol, he explains, involves applying and air-drying OptiBond Primer first for 20 seconds, and then OptiBond Adhesive for 15 seconds. “That’s it. The directions are the same for every procedure, whether you are bonding a crown, doing a direct resin, or cementing veneers,” he says happily.

Scoles says he considers simplicity and ease of use critically important, but maintains that a two-bottle system is necessary. “You can’t get something for nothing. You have to look at the science,” he says, explaining how the unique chemistry of XTR’s OptiBond Primer—which contains no phosphoric acid—and OptiBond Adhesive provides outstanding bond strengths to cut and uncut enamel and dentin to offer predictable outcomes for all clinical procedures.

“Because OptiBond Primer is hydrophilic and acidic, it provides both effective etching and good penetration, and because OptiBond Adhesive is hydrophobic and neutral, it creates the ideal seal and hybrid layer to adhere to all types of dental cements,” he says.

This, Scoles adds, contrasts with single-bottle systems, which he says try to be both hydrophilic and hydrophobic at the same time. “But they do not etch, penetrate, or seal as well as the OptiBond Primer and Adhesive. They also don’t protect against sensitivity.”

Alan Wickenhauser, DDS, who maintains a private practice in Bethalto, Illinois, considers XTR a “practice essential,” one that supports his techniques and his niche as a dentist. “When you’re talking about ‘universal,’ you’re talking about all-embracive. What is really good about XTR, in my opinion, is that it is embracing not only the substrate but your technique as well.”

Wickenhauser says XTR’s primer is just as effective at etching enamel as phosphoric acid but without the postoperative sensitivity associated with phosphoric acid. “Whether you prefer total-etch, self-etch, or selective-etch, when you look at the data, the quality is the same.” However, he says, unlike other universal systems, with XTR there is no need to use additional products or procedures—such as a desensitizer, a dual-cure activator, or an acid-etch—as a “crutch.” Like Scoles, he does not consider such products truly universal. “If you’re going to call yourself universal, then be the true blue.”

Having used XTR for the past 2 years, Wickenhauser goes so far as to call the product “a game changer” that saves time and money. “It’s actually bringing quality dentistry to a new level, enabling dentists to provide high-quality service to patients without sacrificing technique,” he says. “It’s something that should be in every office, in my opinion.”

“I want what’s best for my patient, not necessarily what’s most convenient to use,” says Scoles, who nonetheless finds it useful to be able to carry less inventory while being able to use a trusted system that meets the needs of his patient and himself as well as his definition of universal.

“OptiBond XTR is a genuine universal bonding agent in the truest sense of the phrase, because it delivers predictable outcomes for every kind of clinical procedure and bonds to the gamut of restorative substrates available on the market today. At the same time it’s compatible with resin cements without the use of separate phosphoric acid, desensitizer, silane, or a dual-cure activator,” Scoles concludes. 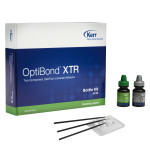