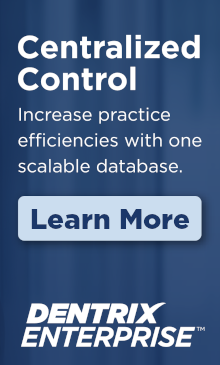 The digital workflow is trending in dentistry. However, for the fully or partially edentulous patient who does not have opposing dentition for the jaw record, the clinician needs to use the traditional analog way to document the bite record. This article demonstrates a method in which the "digital centric record technique" is used whereby the centric record is taken fully digitally and the denture design is also fully digital. Photographs are not included in the documentary protocol, because the 3D face capture technology that was utilized is advanced enough to be used in planning cases.

The 3-dimensional (3D) facial scan has become an integral part of the digital workflow. A problem with the 3D facial scan, however, is that the technician may not be able to locate the upper jaw precisely. Presently, there are only two facial scanners that can be used. One (Face Hunter™, Zirkonzahn, zirkonzahn.com) is a very sophisticated system. The other facial scanner (AFT System One, AFT Dental System, aftdentalsystem.com) has two scanbodies for the lab to locate the upper jaw correctly. By combining the use of facial reference glasses (Kois Facial Reference Glasses, Kois Center, koiscenter.com) and a 3D facial scan, the clinician is able to design the smile without the need to use a facebow or dentofacial analyzer.1 This approach not only simplifies the procedure, but can be a more precise methodology, as the design is facially and 3-dimensionally driven. With the combination of the intraoral scan and CBCT scan, the implant treatment can be planned fully digitally.

A 70-year-old woman presented with concerns about her mastication ability. She was wearing a cobalt-chromium (Co-Cr) telescopic denture with teeth Nos. 3, 4, 8, 9, 11, 13, 22, 27, and 28 remaining (Figure 1 and Figure 2). Teeth Nos. 27 and 28 were broken down, and tooth No. 22 was hopeless with grade 3 mobility. Her chief concern was the mobility of the lower denture due to the deteriorating teeth. She desired to have maxillary and mandibular fixed implant prostheses.

Her medical history was noncontributory. The tooth loss was mainly due to dental caries.

New upper and lower dentures needed to be fabricated for the treatment plan and CBCT scan. Wax occlusion rims and the gothic arch method2,3 are commonly used methods for centric relation (CR) recording in analog protocols. This can be time-consuming and require several visits. This article describes a method to record the CR fully digitally with the use of a facial scanner.

A series of the photographs is taken according to the Kois protocol and include smile view (Figure 3), lips in repose view, Duchenne smile, and shush view. This is done to determine the incisor position and lip dynamics.

Two horizontal lines are marked on the patient's right and left sides of the face to indicate the horizontal line of the natural head position (Figure 4 and Figure 5).

In this clinical case, the clinician planned to lengthen the maxillary incisors 2 mm on the existing denture. This means that the vertical dimension would increase by 2 mm.

The 3D face capture technology is advanced enough to be used in planning cases. The facial scanner used in this case (AFT System One) is able to perform multiple body scans in order to transfer vital information into the 3D design of the future smile.

Two accessories of the AFT scanner were utilized: the forehead scanbody and mouth scanbody. The forehead scanbody was positioned on the front of the patient; it was well ﬁxed because it would be used throughout the scanning period. The mouth scanbody (Figure 6) was ﬁxed intraorally using impression silicone material in the intraoral component of the accessory, and the extraoral accessory remained outside of the mouth to be scanned.

The mouth scanbody (AFT face scanner) is used as a centric tray to take the preliminary centric record and vertical dimension of occlusion. A point is drawn on the chin of the patient, and the distance from the nose to the mark is measured with the patient wearing the existing denture. Impression silicone (Elite HD+, Zhermack, zhermack.com) is put on both sides of the mouth scanbody (Figure 7). The patient is then instructed to close the mouth slowly until the desired vertical dimension is reached. The patient is then instructed to swallow until the material has polymerized. A secondary impression with light-body polyvinyl siloxane (Imprint™, 3M Oral Care, 3m.com) is then taken.

The design software allows the patient's head and intraoral STL ﬁles to be placed in the virtual articulator with great precision (Figure 11 through Figure 13). The horizontal line marked in the facial scan, which is used to locate the natural head position, can serve as a reference of the occlusal plane. The technician can then begin designing the new smile with respect to the patient's face (Figure 14 and Figure 15).

Upper and lower dentures are designed, and the STL file is sent to the clinician for the dentures to be printed (Figure 16).

The dentures are tried-in to assess the appearance, phonetics, and function (Figure 17 and Figure 18). Radiographic markers (gutta-percha) are inserted in the labial and palatal/lingual aspects for CBCT scanning (Figure 19 and Figure 20). The patient is scanned wearing the dentures with markers (open mouth), and the scan is exported as multifile DICOM.

The denture is then removed from the patient's mouth and placed on a non-metallic platform and scanned by itself. When scanning, at least 0.3 voxel should be used, and the scan is exported as multifile DICOM.

By merging the DICOM data, intraoral scan, and denture scan, the implant position and angulation can be planned digitally (Figure 21 and Figure 22).

Use of the centric tray is the traditional method to register the preliminary centric record and vertical dimension. Using the Kois reference glasses, the natural head position can be recorded and a horizontal line can be drawn and used as the reference for the inclination of the occlusal plane.

The clinician can plan the maxillary and mandibular incisal edge positions based on the facial scan record. With the Kois deprogrammer platform the denture can be prepared and used in a situation where the centric relationship is incorrect. The patient can be deprogrammed for 1 hour and the new centric record can be taken. In a fully edentulous situation, mini implants can be inserted to stabilize the denture for the record-taking.

It should be noted that no physical impression was used. Although putty was utilized to make the index with the occlusal aligner, it was never poured out, nor was an analog cast made. The index was used only to relate with the supraorbital aligner, thus maintaining a fully digital workflow.

This case illustrated a method to obtain the centric record digitally. The use of the 3D facial scanner simplifies the workflow and allows the team to plan the case fully digitally. It also reduces the number of clinical visits and amount of time spent on the restoration and increases predictability. The clinician can try-in the denture in the second visit. This method also increases the comfort level and satisfaction of the patient. The merging of the CBCT data enabled the implant planning to be done digitally and in a facially driven approach.

From the authors' limited knowledge, this may be the first case report in which the facial scan and centric tray technique were used to achieve the digital bite record and full digital workflow. One of the authors (MM) previously co-authored an article describing the full digital workflow using an intraoral scan and AFT facial scan. However, the worklfow described in that article was used in a patient with enough teeth to register the bite record. In the present article, the workflow was used in a partially edentulous patient without opposing teeth for the bite record. The authors also recommend using this method for fully edentulous patients for the preliminary bite record.