Abstract: Displacement of a dental implant into the maxillary sinus has become a more frequent occurrence due to a greater number of implant-supported prostheses being placed in the atrophic posterior maxillary area. In addition, dentists are increasingly placing implants into augmented maxillary posterior areas. Reasons for displacement of dental implants into the maxillary sinus may include poor bone quality or quantity, failure of a sinus augmentation procedure, and poor surgical technique. When this complication occurs, the displaced implant in the maxillary sinus should be removed because it could act as a foreign body and cause numerous complications. In this case report, a 56-year-old male patient presented with pain and a loose, cemented prosthesis in the maxillary left posterior area. Radiographic examination showed that an implant with the final abutment supporting the prosthesis in site No. 14 had been displaced into the maxillary sinus. The implant and abutment were successfully retrieved from the sinus using a lateral window technique combined with several diagnostic maneuvers that will be described.

Dental implants have become a common restorative treatment option due their high long-term success rate.1-4 However, complications associated with dental implant treatment are well documented. Implant complications can be related to surgical and restorative inexperience, poor planning, a patient's medical condition that may affect bone healing, or an implant restored in bone with poor quality or quantity.5,6 Implant migration into the maxillary sinus is a potential problem associated with dental implant placement in the posterior maxilla.7 In addition, implant displacement into the ethmoid and sphenoid sinuses has been reported.8,9

Various techniques have been used to retrieve an implant that is displaced into the maxillary sinus, including osteotomy approaches through the facial wall of the sinus (eg, Caldwell-Luc procedure). This approach, however, can lead to paresthesia of the infraorbital nerve over time.13 Another method to retrieve a displaced implant is via endoscopic surgery using a transnasal or transoral approach.14,15 The transnasal technique can be performed through the canine fossa or inferior meatus. However, the latter is difficult to execute due to the acute angle of the meatus to the sinus floor, especially when the implant is located on the sinus floor. Endoscopic surgery to gain access to the sinus from the canine fossa often results in a better outcome. The transoral approach requires a small incision and an access hole larger than the implant diameter and may be a less invasive technique when the implant is located in close proximity to the sinus floor.16,17 The use of a combination Caldwell-Luc and endoscopic approach also has been reported.18,19

According to the literature, most implant displacements occur prior to final prosthesis.10 This case report discusses the diagnosis and treatment sequence used to remove a displaced restored implant from the maxillary sinus that supported a fixed splinted restoration.

In 2004, a 56-year-old male Asian patient had a left side maxillary sinus augmentation and implants placed with a delayed protocol in the sites of teeth Nos. 2 through 5, 8, and 12 through 15. In 2012, the patient had the remaining teeth Nos. 9 through 11 extracted and implants placed in the sites of Nos. 9 and 11. The final prosthesis on the left side was a fixed splinted implant-supported prosthesis that included implant Nos. 12 through 15.

In 2013, the patient presented with the chief complaint of a loose restoration and pain in the maxillary left posterior area. When an orthopantomogram (OPG) was taken, the implant and permanent abutment at the site of tooth No. 14 was found to be displaced into the maxillary sinus (Figure 1). The patient was informed of the problem and advised of the potential complications if the implant/abutment was not removed. He then consented verbally and in writing to its removal after a discussion with the clinician of the risks and possible complications of the measures needed to be taken to perform this procedure.

After local anesthesia was obtained using lidocaine 2% with 1:100,000 epinephrine (2% Xylocaine®, Dentsply Sirona, dentsplysirona.com), an osteotomy was made through the lateral widow with a #8 round bur. A large amount of granulomatous tissue was found around the implant/abutment accompanied by bad odor and pus. A suction was used to aspirate the chronic inflammatory cells and fluid. Thorough irrigation was performed with sterile saline solution. A fiber-optic light was then used to locate the implant, and a bone rongeur was used to retrieve the implant from the sinus.

The sinus was then additionally irrigated several times with saline to reduce the microbial load. The sinus window was covered with a resorbable membrane barrier, and the flap was sutured without tension. After implant removal and sinus debridement the patient reported immediately feeling more comfortable.

The patient was prescribed amoxicillin 500 mg three times per day for 7 days, and 1 week later the sutures were removed. Amoxicillin was chosen because there was no evidence of active infection prior to surgery, and the authors' experience in treating failed sinus grafts, whether early or late, had been very positive with its use. If after removal of the implant and debridement of the area any infective symptoms would have manifested and persisted, switching the antibiotic may have been a consideration.

The healing progressed uneventfully. The prosthesis extending from implant Nos. 9 to 15 was supported by four remaining implants (Nos. 9, 11, 13, and 15), which were stable with good peri-implant bone support. It was, therefore, re-cemented after removal of displaced implant No. 14 (Figure 3). The implant and abutment after removal are shown in Figure 4. A 1-year post-surgery OPG confirmed the healed sinus and re-cementation of the prosthesis (Figure 5).

Dental implant displacement into the maxillary sinus can cause serious complications, because implants inside an enclosed space can act as foreign bodies, and this may eventually lead to sinusitis due to interference with the ciliary movement of the sinus membrane.20,21 In the present case, the presence of infection mandated the removal of the displaced implant, because the implant was the source of the infection.22 Depending on when it occurs, implant displacement into the maxillary sinus is classified as early or late displacement.23 Early displacement can happen at the time of surgery due to poor planning or insufficient primary stability in poor-quality or regenerated bone. Conversely, late displacement may occur any number of years after implant insertion. Late displacement may be due to inflammatory reactions that cause peri-implantitis and bone loss. In the authors' experience in treating displaced implants, both classes of displacement are more common when implants are splinted.

In the present case, the implant was displaced into the sinus approximately 6.5 years after loading, presumably as a result of bone loss due to peri-implantitis. The cement-retained implant restoration, which was loose due to cement washout, was removed, allowing access to and removal of the displaced implant and abutment without causing damage to the prosthesis. However, the cemented restoration, as it was in this case, combined the abutment and implant in one unit, and they, therefore, were displaced as one unit. This displacement could have been caused by overload on the implant when the cement on the implant/abutment separated from the fixed restoration or by cement washout and peri-implantitis-related bone loss loosening the implant. (The authors surmised that if there was no bone loss and only cement washout, the implant may have remained in position as did the others under the fixed splint; moreover, when the implant ultimately was removed from the sinus, there was no evidence of cement on it [Figure 4] or under the fixed restoration.)

Techniques to retrieve an implant from the sinus are described in the literature and include a Caldwell-Luc procedure in which access to the sinus is obtained through the canine fossa. A second method achieves access through the alveolar crest to retrieve the displaced implant (Figure 6 and Figure 7).24 A third technique uses a lateral window that allows enhanced vision and improved accessibility compared to the other techniques(Figure 8 through Figure 10).25,26 Another method that is often attempted is to access the sinus by using an endoscope, which can be done either intraorally or intranasally; this technique, however, can be challenging, especially if the implant is detached from the sinus floor.27

In the present case, a lateral window was used, because it allowed better access than a crestal approach to locate and retrieve the implant/abutment. Although a crestal approach is less invasive, it would have required widening the original osteotomy used to place the implant and may have caused damage to the sinus because the implant was coronal and distal to this area. Also, removing the implant through the small crestal opening would have been difficult. Such an approach could have caused several additional complications when removing the implant, including damage to the sinus and remaining implants. The prosthesis had loosened from the supporting implants and was removed prior to the lateral window surgery. Although removal of the prosthesis in this case was therefore easy, this scenario emphasizes the value of a screw-retained versus a cement-retained prosthesis to allow retrievability. The lateral window approach can be more invasive than the crestal approach; however, it enables improved access and visibility for removal of the displaced implant from the sinus. Once access was achieved using the lateral wall approach, sinus debridement with the use of a suction was performed. After sinus lavage, a fiber optic light was employed to easily locate the implant/abutment.

The location of the implant/abutment was determined by comparing an initial OPG with two others taken after lateral and vertical head movements. It was then determined that the implant/abutment was mobile and located close to the sinus floor. (The authors note that with regard to the use of the two successive OPG images, this approach yielded far less radiation exposure than two cone-beam computed tomography [CBCT] scans would have, and that one limited-field CBCT scan might not have shown positional movement of the implant. Additionally, the two OPG scans were easier to take and analyze than periapical x-rays, which may not have shown enough of the implant position and sinus.)

Good access and visibility allowed the implant/abutment to be removed with a rongeur. This minimally invasive approach to the removal of the implant/abutment prevented further migration and damage to the sinus and may have helped to avoid possible chronic sinus problems.

Following removal of the implant/abutment, the sinus window was covered with a resorbable membrane barrier and the flap was sutured without tension.28 To emphasize the relative efficiency of the technique, it may be noted that the entire procedure to gain access to the sinus and retrieve the implant took approximately 20 minutes. The area healed uneventfully with complete elimination of all pain and symptoms. This allowed the original fixed prosthesis to be re-cemented.

A dental implant that is displaced into the maxillary sinus should be removed to avoid further complications, even if the implant has caused no problems for a period of time. Placing dental implants in a posterior atrophic maxilla with sinus augmentation is a common procedure, but clinicians should be aware of the potential of an implant being displaced into the maxillary sinus. Implant stability should be tested before the second-stage surgery, especially in a posterior maxilla with compromised bone quality or sinus augmentation.

Displacement of dental implants into the maxillary sinus may become more frequent due to increasing demand for implants in the posterior maxilla with sinus augmentation procedures. The lateral window technique for retrieval of a displaced dental implant into the maxillary sinus is an effective method that allows good access and can result in fewer potential complications. 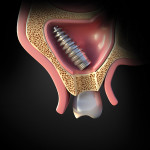 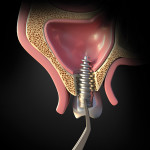 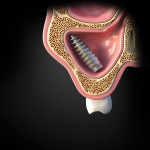 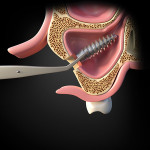 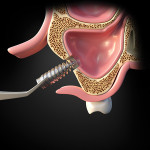