As a general practitioner who has been performing CAD/CAM dentistry in his Fort Worth, Texas, office for the past 15 years, Chad Duplantis, DDS, is always looking to utilize the most advanced technology available. Specializing in restorative and esthetic dentistry, his small group practice prides itself on staying ahead of the technological curve. "I follow technological advancements very closely," he admits. Being knowledgeable of current technology helps him when deciding what equipment to select for his practice.

Before purchasing an intraoral scanner, there are several key factors clinicians should consider, Duplantis says. "Initially, all dentists want to know the return on investment (ROI)-how much will this cost? Often they simply look at what they are spending on impression materials and try to make an analysis. But when it comes to investing in a scanner, you have to view things differently rather than simply compare to impression material costs alone," he suggests.

Today's digital scanners are so versatile, he says, that dentists should consider what a scanner could do to improve the scope and productivity of their practice. "Digital restorations fabricated from a digital impression can be much more cost-effective. Digital scanners also can open dentists' eyes to new possibilities that will increase their production."

Having used several intraoral scanners over the past decade and a half, Duplantis has become enamored with the iTero® Element 2 from Align Technology, Inc, calling it "the most intuitive scanner I have ever used." Duplantis in particular finds value in the unit's TimeLapse visualization feature, which allows both clinicians and patients to view the "patient progression portal." According to Duplantis, TimeLapse lets the clinician track the progress of both additive and subtractive changes in the patient's oral health. "This allows us to monitor changes in wear, movement, recession, abrasion, inflammation, and more. We can then make more accurate diagnoses and treatment decisions."

Duplantis says he has had tremendous success with the scanner with regard to restorations. "Our indirect restorations drop right in," he states, confirming that the use of the iTero Element 2 has resulted in fewer remakes. "The ability to visualize your preps in such an enlarged format has made us better dentists. There is never a question as to whether or not an impression will be accepted by the laboratory prior to sending."

Besides accuracy, speed is also a key advantage of intraoral scanning, and the iTero Element 2 delivers, Duplantis submits. "We are able to take full-arch impressions in a matter of minutes, and we use these for chairside diagnostics or treatments," he attests. Additionally, being able to quickly take an initial digital scan for the patient record at the first appointment "is priceless." He also values the color scan capability, which helps patients better relate to diagnoses and treatment.

Duplantis adds that many of the educational features of the scanner, such as TimeLapse and the Occlusogram tool, have improved his practice's diagnostic capabilities and, thanks to the visualization communication aspect of the technology, case acceptance. In addition, the practice has increased the volume of its clear aligner therapy with the Invisalign Outcome Simulator.

"The iTero Element 2 is the best intraoral scanner system I've used chairside," he concludes. "Align Technology is aware of the changing needs of both the practitioner and the patient and uses that knowledge to constantly drive product design." 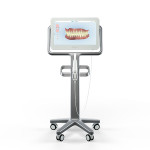