Rainer Seemann, DDS, PhD, a German-based practitioner and part-time professor at the University of Bern in Switzerland, has learned that sometimes the best reaction from patients is no reaction at all. When asked what feedback he typically receives from patients regarding their satisfaction with treatment that includes use of Prime&Bond elect® Universal Dental Adhesive from Dentsply Sirona, he responds they usually aren't even aware of its presence because, "it produces virtually no hypersensitivity."

This is good news for Seemann, Vice President of Global Clinical Affairs at Dentsply Sirona who is responsible for the company's Clinical Research and Clinical Education departments in Milford, Delaware, and Konstanz, Germany. As an affiliate of the company since 2006, he was involved in the development of the successful universal adhesive. "I helped develop Prime&Bond elect, and now it has become the standard adhesive used in our clinic," Seemann says.

Seemann suggests the term "universal" truly applies to Prime&Bond elect because it can be used with any etching technique, including self-etch, total-etch, and selective enamel etch, and for direct and indirect restorations in combination with resin cements. "Studies have demonstrated Prime&Bond elect has a long-term, high bond strength on both enamel and dentin in all etching modes because of its unique chemistry and its main functional monomer, PENTA," he offers. "Its low film thickness also lends well to both direct and indirect restorations."

The incorporation of PENTA (dipentaerythritol penta acrylate monophosphate) gives Prime&Bond elect a superior micromechanical and chemical bond for long-term success. Unlike other adhesive monomers, such as 10-MDP, that contain just one acrylic group, PENTA comprises five acrylic groups, which means it is better able to lock into the resin of the adhesive and the composite to form a dense and stable network when polymerizing, according to Seemann. This chemistry structure allows the adhesive to more effectively resist degradation of the bond. "It's like the difference between gripping something with your whole hand versus just one finger," he describes.

Additionally, Seemann continues, Prime&Bond elect's acetone-based chemistry chases water away from the preparation and allows for a uniform, thin adhesive layer without pooling. This, he says, is one of his favorite aspects about the product. "Sometimes thick adhesive layers may be misinterpreted on x-rays as recurrent caries. They can also interfere with indirect restorations during cementation." The thin-film thickness characteristic along with the fact that Prime&Bond elect cures clear means there will be no visible margins, he asserts.

Seemann reiterates that his patients enjoy the benefit of the absence of postoperative hypersensitivity. "Our patients are so used to a high level of comfort, they probably don't appreciate the lack of sensitivity as much as they should," he quips. Furthermore, patients like the esthetic quality of the clear-drying product.

As an educator, Seemann stresses that Dentsply Sirona, while offering a variety of technical and scientific instruction on its products, focuses on providing training on procedures that are relevant to practitioners. "With approximately half of all direct restorations performed in the United States being Class II restorations, Dentsply Sirona offers a ‘total practice solution' that includes all the products, continuing education support, and other services needed to help clinicians master this procedure." Clinicians who are interested in more training information can visit www.class2restorations.com.

Looking forward, Seemann hopes to work with Dentsply Sirona to perhaps develop "self-adhesive" restorations that would require no external adhesive. For now, however, he is happy with Prime&Bond elect, a quality product that he says he can depend on for consistent results-and that his patients may never know is there. 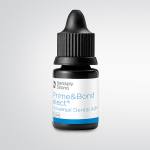