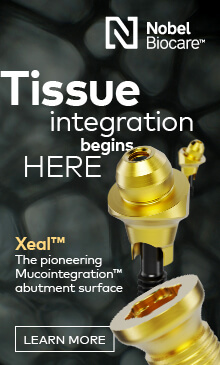 Salvaging Implants With an Nd:YAG Laser: A Novel Approach to a Growing Problem

As the incidence of implant placement expands, so too does the occurrence of implant-related pathological conditions such as peri-implant mucositis and peri-implantitis. This article will discuss implementation of a laser protocol that serves as a treatment modality designed specifically to help save ailing and failing implants. This multi-stage approach incorporates application of laser energy from a particular Nd:YAG laser with variable pulse width. This laser wavelength has demonstrated a variety of capabilities that may contribute to its clinical effectiveness. Representative long-term results of this treatment method are described, and a case depicting the protocol is presented.

The use of dental implants for the replacement of missing teeth or entire dentitions is becoming the standard of care in treatment planning for patients.1-3 This paradigm shift from fixed or removable prostheses to implants is largely patient-driven. Greater chewing efficiency, patient comfort and satisfaction, and predictable results with improved stability, retention, and function are some of the forces responsible for this shift.4,5 However, along with scientific and technological advances have come increased challenges regarding dental anatomic sites for dental implant surgical placement.

The well-defined protocol (LAPIP™, Millennium Dental Technologies, www.lanap.com) provides a minimally invasive surgical methodology to address and effectively treat the growing incidence of peri-implant mucositis and peri-implantitis.10 A critical component of this protocol is the use of a specific 6.0-watt, free-running digitally pulsed neodymium:yttrium-aluminum-garnet (Nd:YAG) laser (PerioLase® MVP-7™, Millennium Dental Technologies) of 1064-nanometer (nm) wavelength with variable pulse width that is designed specifically for the treatment of periodontal disease and the LAPIP therapy.

Briefly, this multi-step protocol includes the following procedures: Surgical probings are performed under local anesthesia to record the depths of all bony defects in the soft tissue around the implant. Pocket depth determines the amount of laser energy to be delivered during the initial ablation and subsequent hemostasis applications. The laser fiber is then inserted into the periodontal pocket, oriented in a prescribed fashion, and the laser is activated at particular settings to ablate (remove) the diseased epithelial lining and granulomatous tissue and to reduce bacteria. Ultrasonic scalers and special hand instrumentation are then used to remove foreign substances (including calculus and cement) from the implant surfaces. Next, bone is modified and decorticated in a prescribed manner to stimulate the release of fresh blood and growth factors from the bone. The laser is then used again at specifically adjusted settings in hemostasis mode to form a thermal gelatinous clot containing growth factors from the bone. Coronal soft tissue is approximated against the implant using finger pressure to achieve adhesion, and then occlusal adjustment is performed to reduce traumatic forces and mobility. Splinting reduces mobility and traumatic occlusal forces.

Collectively, these procedures provide the environment for reosseointegration of the implant.

The effectiveness of the Nd:YAG laser wavelength in achieving its successful clinical outcomes under this protocol may be attributed to a variety of factors as discussed below.

The first aspect is the minimally invasive, tissue-conserving quality of this laser wavelength when it is emitted at particular laser operating parameters, including power densities, energy densities, spot sizes, peak powers, pulse frequencies, and variable pulse durations. In their light microscopy study, Gold and Vilardi observed the ability of the pulsed Nd:YAG laser to effectively remove periodontal pocket lining epithelium in humans with moderate periodontitis without causing damage (necrosis or carbonization) to the underlying connective tissue.11

Ting et al made similar observations in human patients with chronic periodontitis of moderate severity treated with a pulsed Nd:YAG laser. Histologic and scanning electron microscopic examinations of tissue specimens showed laser irradiation was able to remove inflamed pocket epithelium without damage to healthy, uninflamed pocket epithelium and with no significant damage to the connective tissues. They also noted a complete absence of microorganisms in the laser-treated test specimens.12

This apparent selective photothermolytic capability of the Nd:YAG laser wavelength was demonstrated in a laboratory study by Harris and Yessik, who examined the ablation of the periodontal pathogen Porphyromonas gingivalis grown on blood agar. This medium was used as an approximation of gingival tissue. At particular settings, the laser was able to ablate the subject pathogen without visible effect on the blood agar. The researchers concluded that in a clinical setting, the pulsed Nd:YAG laser may selectively destroy pigmented pathogens while leaving the surrounding tissue intact. The pulsed 810-nm diode did not exhibit the same selectivity.13

A second factor is the demonstrated ability of the Nd:YAG laser to reduce pathogenic microorganisms in the periodontal pocket. In 1992 Cobb et al detected a substantial suppression of three putative microbial pathogens (Aggregatibacter actinomycetemcomitans, P gingivalis, and P intermedia) within the laser-treated pockets of human patients compared to untreated control sites. The investigators indicated their results are suggestive of a potential specific use of the Nd:YAG laser for the removal of bacteria from infected pockets.14

Twenty-two years later, McCawley (one of the members of the 1992 Cobb investigative team) and colleagues assessed the immediate post-treatment effects of Nd:YAG laser irradiation on putative bacterial pathogens in deep periodontal pockets of 20 human patients. They reported the laser immediately suppressed the tested pathogens below culture detection limits.15

Giannelli and colleagues tested four different lasers and demonstrated that the Nd:YAG and 810-nm diode lasers were able to significantly reduce six periodontopathogenic bacterial species within gingival epithelial cells outside the periodontal pockets of adult patients with chronic periodontitis, without damage to connective tissue. They indicated the accompanying microvessel constriction can prevent bleeding and reduce the chances of systemic bacterial spreading during treatment.17

Relating the antibacterial effect of the Nd:YAG laser to implants, Giannini et al in their in vitro research found that specific parameters of Nd:YAG laser irradiation were able to ablate aerobic and anaerobic microbial species that were streaked on implants without damaging the titanium surface.18 Similarly, Gonçalves and colleagues showed different levels of bacterial-level reduction on the surfaces of laboratory implants by Nd:YAG and 980-nm diode lasers, depending on the settings used and the type of implant surface. Scanning electron microscopic examination revealed no implant surface changes from the irradiation.19

That the Nd:YAG laser can be used to help decontaminate implant surfaces without apparent damage to the implant itself is an important consideration for effective clinical usage. Research shows that the Nd:YAG laser—or diode, erbium, or CO2 lasers—can adversely alter implant surfaces and/or result in inadvisable temperature increases, depending on the laser settings and exposure durations selected.20-23 Therefore, laser-assisted peri-implant therapy is not recommended for a novice user. Attaining the proper qualifications through studied participation in a rigorous authorized training program is an absolute requirement.

Judicious use of the proper laser parameters, informed clinical technique, and live patient training can help achieve the results reported in a human patient study of Nd:YAG laser treatment of failing implants, performed by 21 dentists trained in the LAPIP technique. Post-treatment radiographs ranged from 2 to 48 months. All examined cases provided evidence of increase in crestal bone mass around the implant and, when reported, probe depth reductions. All clinicians noted control of peri-implantitis, reversal of bone loss, and rescue of the incumbent implant.10

Giannelli and associates evaluated the in vitro effects of Nd:YAG laser irradiation on the inflammatory response to bacterial lipopolysaccharide (LPS)-coated titanium disks. They noted that laser irradiation significantly reduced LPS-induced nitric oxide production and interleukin-8 production by endothelial cells, leading them to conclude that the use of the Nd:YAG laser may be a promising tool for therapeutically managing peri-implantitis.26

It may be possible that certain levels of Nd:YAG laser irradiation can stimulate aveolar bone growth at the cellular level. Arisu et al evaluated the in vitro effects of pulsed Nd:YAG laser energy at different energy settings on human osteoblast-like cell cultures. Standard colorimetric assays were used to estimate cell viability and proliferation after 7-, 14-, and 21-day incubation periods. They found that certain laser settings stimulated cell viability and proliferation while higher settings had an inhibitory effect.27

The Chellini team investigated the in vitro effects of Nd:YAG laser irradiation on osteoblasts, endothelial cells, and fibroblasts—cells representative of the oral macroenvironment. They observed significant induction in the expression of osteopontin, alkaline phosphatase, and Runt-related transcription factor 2 in osteoblasts, type I collagen in fibroblasts, and vinculin in endothelial cells, underlying molecular mechanisms demonstrative of a biostimulatory effect.28

Kim et al examined the effect of a Q-switched Nd:YAG laser (with the same wavelength as a free-running pulsed Nd:YAG laser but with higher peak power) on preosteoblast cells exposed to laser irradiation. Their in vitro results showed that high-power, low-level Nd:YAG laser energy not only increased osteoblast activity, but efficiently accelerated mineral deposition.29

Another Kim group also used a Q-switched Nd:YAG laser to investigate in vivo the capacity of bone repair in bilateral calvarial defects in rats and rabbits. They noted that periodic application of laser irradiation significantly increased new bone formation as evaluated by micro-computed tomography-based analysis and histological observation 4 weeks after surgery.30

A 64-year-old female patient experienced early loss of attachment due to peri-implantitis as seen in a July 2012 periapical radiograph of an implant placed at the No. 18 site (Figure 1). Fifteen months later examination revealed marked progression of attachment loss and increase in probing depth (Figure 2).

The patient presented in October 2013 with a periodontal abscess with bleeding and suppuration. Pocket depths were 12 mm on the mesial and 10 mm on the distal of the implant (Figure 3). After the primary care dentist had removed the crown, in early December 2013 the treating clinician placed a healing abutment after debriding the lesion.

Two weeks later, on December 16, 2013, the soft tissue showed marked improvement but was still edematous (Figure 4). During this same appointment, a periapical radiograph was taken (Figure 5) and the site was treated with the LAPIP protocol (Figure 6).

When the patient returned for post-treatment evaluation in early January 2014, significant healing had occurred and the soft tissue showed a substantially improved response (Figure 7).

Four months after treatment, the periapical radiograph revealed the progress of the apparent bone regeneration around the implant (Figure 8).

One year after the single LAPIP treatment was completed, the periapical radiograph showed significant and progressive regeneration of peri-implant bone (Figure 9). Probing depths were reduced to 4 mm. (Author note: This case was provided courtesy of I. Stephen Brown, DDS, FACD, FICD.)

The aforementioned laser-related factors provide insight into the possible contributing reasons for the demonstrated clinical success of the described protocol. It should be emphasized, however, that this protocol is a multi-step approach that utilizes both conventional instrumentation and a specific Nd:YAG laser with multi-variable pulse width and specific energy settings, energy densities, pulse frequencies, peak powers, and pulse durations to achieve its results. Additional investigations will elucidate how the combination of steps performed during this procedure optimizes patient outcomes.

Armed with the proper training and carefully adhering to the prescribed step-by-step approach, general practitioners and specialists alike have an effective therapy regimen that is designed specifically to treat peri-implantitis and save ailing and failing implants.

The author is currently chairman of the US Food and Drug Administration (FDA) Dental Products Advisory Panel. Comments printed in this article do not reflect the policies of the FDA. Dr. Suzuki received no honorarium from Millennium Dental Technologies for this article.

9. American Academy of Periodontology Task Force on Peri-Implantitis. Peri-implant mucositis and peri-implantitis: a current understanding of their diagnoses and clinical implications. J Periodontol. 2013;84(4):436-443.