The continually evolving field of guided bone regeneration (GBR) strives to create adequate volumes of bone to facilitate the placement of implants in prosthetically desirable position. Clot stabilization, membrane-based cellular exclusion, and space maintenance are essential to the technique.1 A variety of bone materials and membranes may be used in GBR to attain the desired bone dimensions.1-5 When performing vertical and horizontal bone augmentation in the moderate to severely atrophic ridge, titanium-reinforced membranes, tenting screws, wire mesh, or block grafts are frequently needed to maintain space and prevent wound collapse.6-7 Unfortunately, these may require more invasive surgery and can elevate the risk for wound dehiscence.6,8 Another major drawback is that the reentry surgery to retrieve titanium mesh and often times titanium screws can be as invasive as the initial procedure to augment the ridge.5

In 2009, Stadeker9 reported on the “Alabama Graft” procedure using 2-mm wide cortical bone pins in socket preservation and ridge augmentation. It was suggested that allogeneic cortical bone pins measuring 2 mm in diameter in varied lengths can protect surrounding graft materials, support membrane barriers, and resist wound compression from the overlying soft tissues. He also stated that bone pins become integrated into both the augmented and native bone, improving local bone quality and simplifying delayed implant placement. The sterile cortical bone pins used by the present author (BonePin, Exactech Inc., www.exac.com) come two to a pack, measuring 2 mm in diameter and 17 mm in length (Figure 1). The cortical pins are produced from struts taken from femoral, tibial, and humeral shafts. Each end of the cortical pin is chamfered.

Leukocyte- and platelet-rich fibrin (L-PRF) has recently gained popularity as a wound-healing accelerant in augmentation procedures.10-15 Simple centrifugation of whole blood with no additives produces an autologous fibrin matrix rich in platelet and leukocyte growth factors.16-18 (Figure 2 and Figure 3). It is hypothesized that these soluble molecules are trapped in the fibrin meshes of L-PRF and can be slowly released, producing a relatively long-term effect for 7 to 14 days.16,19 The intrinsic polyvalent properties of the L-PRF membranes, particularly their effects on proliferation and differentiation of bone and gingival cell populations,20 are essential to the superior soft- and hard-tissue healing experienced with this procedure. Moreover, the healing of a bone graft is also dependent on an adequate soft-tissue wound closure, for which platelet concentrates (like fibrin glues) are particularly efficient.21,22

The purpose of this article is to demonstrate a novel clinical method of inserting cortical bone pins for support of the grafted materials and L-PRF to enhance wound healing in horizontal and vertical augmentation procedures.

A healthy 27-year-old female oral surgery resident was referred to the author’s private office for implant replacement of missing tooth No. 7. A CBCT revealed inadequate ridge width (3 mm to 3.4 mm) for the placement of a 3.3-mm diameter implant in ideal prosthetic position (Figure 4). Horizontal augmentation was proposed and consent signed. The patient began taking amoxicillin (1.5 g/day) one day prior to the surgical appointment. She rinsed with 0.12% chlorhexidine gluconate for 1 minute just before the procedure. Four 9-ml tubes (Vacuette® blood collection tubes, Intra-Lock International, www.intra-lock.com) of whole blood were collected with a butterfly needle (Vacuette® Butterfly Blood Collection Set, Intra-Lock International). The blood was immediately spun in a dedicated L-PRF centrifuge (IntraSpin®, Intra-Lock International) at 2,700 rpm for 12 minutes. During the blood spin, local anesthesia was administered (xylocaine 2% with epinephrine 1/100,000).

At the completion of the centrifugation process, the L-PRF clots were transferred to a special box (Xpression® Fabrication Kit, Intra-Lock International) to create membranes (Figure 5) containing most platelets and at least half of the leukocytes. The membranes may be stored in the box for up to 2 hours prior to placement.23 A full-thickness mucoperiosteal flap was reflected with buccal-releasing incisions on the proximal surfaces of the adjacent teeth. Cortical perforations were made with a round bur in the buccal cortex to increase vascularity at the surgical site. A 2-mm twist drill (Figure 6) with adjustable stop (H & H Co., www.hhco-store.com) was used to create apical and coronal osteotomies measuring 2.5 mm in depth. The pin holes were placed in optimal position to provide a secluded space to ensure adequate buccal augmentation. The pins were modified to the desired length with a piezo saw insert (OT7, Piezosurgery Incorporated, www.piezosurgery.us) and stored in the patient’s blood for at least 5 minutes prior to insertion. The length of pin is determined by the desired horizontal or vertical bone gain with 2.5 mm to 3 mm of the pin length stabilized in the osteotomy created in the native bone (Figure 7).

After pin stabilization, a periosteal release incision was performed to provide tension-free primary closure. The release was performed early so that bleeding was well controlled during particulate graft placement and soft-tissue closure. Then, demineralized bone matrix (DBM) with mineralized cortical cancellous bone chips (Regenaform®, Exactech Inc.), saturated with L-PRF exudate collected in the L-PRF box, was combined with bovine bone mineral (Endobon®, Biomet 3i, www.biomet3i.com) in a ratio of 4:1. The composite graft was applied to cover the pins and build out the ridge to the desired thickness (Figure 8). The bovine bone mineral was added to reduce graft shrinkage during healing.24

The graft and pins were first covered with two PRF membranes to help control bleeding and stabilize the graft (Figure 9). Bilayered pericardium membranes (Exactech Inc.) were then placed over the L-PRF (Figure 10). Coverage was completed with two additional PRF membranes (Figure 11) placed to improve tissue quality and aid in maintenance of primary closure. A combination of mattress and interrupted polytetrafluoroethylene (PTFE) sutures (Cytoplast™, Osteogenics Biomedical, www.osteogenics.com) were used to primarily close the wound. Antibiotics were continued for 7 days and the sutures removed at 10 days. An orthodontic retainer with replacement tooth was worn during the healing phase.

Three months later, a small punch incision was made to replace and expose the healing abutment. This was followed 8 weeks later with insertion of the final screw-retained restoration (Figure 15).

A 65-year-old woman had recently lost a fractured tooth No. 12, which was the anterior abutment for a fixed prosthesis extending to No. 15 (Figure 16). The CBCT cross-sectionals revealed a vertical and horizontal bone deficiency at No. 12, a narrowed ridge at site No. 13, and 2 mm of subantral bone at site No. 14 (Figure 17). The patient was informed she would need vertical and horizontal augmentation as well as sinus elevation prior to implant placement at site Nos. 12, 13, and 14.

Antibiotic therapy (amoxicillin 1.5 g/day) was initiated 1 day prior to surgery. A crestal incision in combination with a vertical release on the mesial aspect of No. 11 permitted broad mucoperiosteal flap reflection. Small cortical perforations were created in the buccal plate at site Nos. 12 and 13 to increase vascularity at the augmented site. Osteotomies measuring 2 mm in diameter and 3 mm in depth stabilized two 7-mm long pins positioned to support vertical and horizontal bone growth. A small oval lateral window was created at site No. 14 for sinus augmentation (Figure 18). The ridge at site Nos. 12 and 13 was grafted with a 4:1 combination of Regenaform and bovine bone mineral (NuOss®, Ace Surgical Supply Co., www.acesurgical.com) and the sinus grafted with L-PRF and NuOss. The grafted sites were first covered with four L-PRF membranes (Figure 19), then two pericardium membranes (CopiOs® Pericardium Membrane, Zimmer Dental, www.zimmerdental.com), followed by the final layer of L-PRF.

Five months later, the CBCT revealed substantial horizontal and vertical augmentation along the entire extent of the ridge (Figure 20), thus permitting placement of three bone-level 4.1-mm x 10-mm implants (Straumann, www.straumann.us) (Figure 21). The implants were submerged and allowed to heal for an additional 4 months prior to uncovering and restoration (Figure 22 and Figure 23).

One of the essential elements in successful GBR is space maintenance.25,26 Cortical bone pins can effectively maintain the regenerative space and resist wound compression. Titanium pins, titanium mesh, or titanium-reinforced membranes serve the same purpose but require removal and have a high potential for exposure.27,28 In addition, the custom-cut and strategically positioned pins can aid in stabilization of particulate graft materials, prevent membrane collapse, and become integrated into both the augmented and native bone, possibly improving local bone quality. They are simple to modify and position in the residual ridge using a 2-mm twist drill with adjustable stop.

Pericardium membranes have proven to be very effective when used in the demonstrated technique. A study in 2004 from Rothamel et al29 showed that the pericardium membrane promoted the attachment and proliferation of human periodontal ligament fibroblasts and human osteoblasts. Also, when used in conjunction with nonautogenous particulate materials, pericardium membranes have been successful in horizontal augmentation in atrophic edentulous implant sites.4 Allogenic bone grafts were selected based on a long and well documented successful history as an alternative material to autografts.30 The bovine bone mineral was included in the composite graft to aid in maintaining graft volume during healing.24

Clinicians can benefit from adjuvants that may enhance soft-tissue healing and bone regeneration. L-PRF membranes stimulate both bone and gingival compartments, particularly through the long-term slow release of growth factors and matrix proteins.15 The covering L-PRF layers also expedite soft-tissue healing and promote the induction of gingival remodeling,31 thereby more predictably maintaining primary soft-tissue closure at the grafted site. When combined with an allograft during sinus-lift and lateral grafting of the alveolar ridges, L-PRF has been shown to promote a more rapid and higher quality of bone regeneration than the same treatments without L-PRF.10,32 Most importantly, the L-PRF technique is simple, quick, and inexpensive, making it a good fit for a daily clinical practice.12,15 The biomaterial is easy to both handle and place with multiple clinical applications. L-PRF has been used on a daily basis in the author’s private practice for the past 5.5 years to stimulate wound healing in not only ridge augmentations but also extraction sockets, mucogingival surgery, and in both lateral and transcrestal sinus floor elevations.12,14

The author is presently evaluating the ability of strategically placed cortical pins to increase interproximal tissue height to improve esthetics in anterior sites (Figure 24 and Figure 25).

When used in conjunction with allogeneic and xenogenic particulate materials, cortical bone pins and pericardium and L-PRF membranes have been successful in effecting horizontal and vertical bone regeneration. Such augmentation has allowed for more desirable implant positioning in previously atrophic ridges. 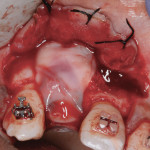 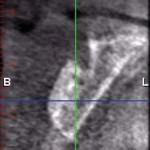 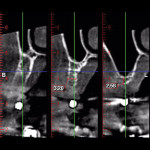 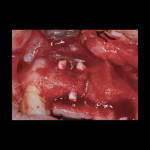