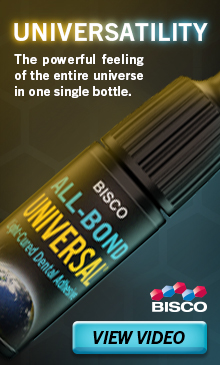 Described here is a clinical technique for the creation of predictable, stable, and efficient provisionals in combination with the use of immediate dentin sealing for partial-coverage posterior ceramic restorations.

One of the primary problems facing clinicians in the use of porcelain inlays and onlays is the creation of a reliable provisional system. Popular methods of provisionalization for full-coverage restorations (acrylic- or composite-based provisionals cemented with a temporary luting cement) fail to provide the necessary integrity when used on preparations that will be retained primarily by the bonded interface rather than traditional principles of macro-mechanical retention. This is particularly true in the case of porcelain onlays with little inherent retention of the preparation designs, a deliberate design feature to ensure minimal stress on the internal porcelain surfaces under compression.1 The problems associated with onlay provisionals in particular is likely one of the primary reasons that this style of restoration is bypassed in favor of more traditional and aggressive full-coverage crowns.

As described and elucidated by Pashley, Paul, Magne, and others,2-5 the technique commonly referred to as immediate dentin sealing (IDS) has been shown to provide significant improvements in long-term dentin bond strength to dentin and reduction in postoperative sensitivity. The IDS technique is the application of dentin bonding agents to the dentin at the time of preparation, and again at cementation. It is thought that the benefits of IDS are achieved through the creation and stabilization of the hybrid layer at a time when the dentin surface is most receptive to bonding agents. The difficulty with the efficient clinical application of the technique has been two-fold: most polyvinylsiloxane (PVS) impression materials fail to set in the most critical areas, where the PVS is in contact with the oxygen-inhibited layer of the bonded dental surface.6 The other clinical difficulty has been in creating provisionals that seal the prepared tooth, hold the occlusal and interproximal contacts, remain in place on the tooth during use, and are efficient to remove and clean. Achieving a balance between the latter two issues has typically caused the greatest numbers of complications in clinical practice.

The problems associated with the failure of impression materials setting in contact with the IDS preparation are resolved by cleaning the preparation with a pumice slurry or air abrasion in combination with air-blocking (curing a second time through a layer of glycerin).6 Although this technique requires an additional step, it is absolutely necessary to ensure complete setting of the impression materials at the bonded surface interface. Without removal of the oxygen-inhibited layer, the PVS will fail to set in the most critical areas, the preparation interface. It should also be mentioned that polyether impression materials will adhere to the bonded surface and tear, regardless of whether or not the oxygen-inhibited layer has been removed. As such, polyether materials are contraindicated for use with IDS.

There are a wide variety of options for provisionals,7 although most have proven insufficient in combination with IDS and porcelain onlays. The four criteria for a posterior provisional—protecting the preparation, holding the occlusal and interproximal contacts, retention, ease of removal—have been difficult to achieve with IDS porcelain onlay preparations largely due to an intrinsic lack of macro-mechanical retention. Many techniques that have been attempted clinically failed for various reasons. Direct bis-acryl–based provisionals (eg, Integrity® Multi•Cure Temporary Crown and Bridge Material, DENTSPLY Caulk, www.caulk.com; Luxatemp®, DMG America, www.dmg-america.com) strongly bond to the IDS surface even after removal of the oxygen-inhibited layer. This may result in a provisional that must be cut off the tooth and the preparation process started anew. Direct acrylic-based provisionals (eg, DuraSeal™, Reliance Dental Manufacturing, www.reliancedental.net) fail to seal the preparations adequately, resulting in contamination of the IDS surface and a tendency to lose retention in the weeks before the cementation appointment, especially with onlay preparations. Cementing provisionals (directly or indirectly fabricated) with polycarboxylate cements is fairly successful, although the residual cement is difficult to remove and requires aggressive use of air-abrasion for its complete removal. This is also likely to result in a significant removal of the previously created hybrid layer. The use of eugenol-based temporary cements (eg, TempBond®, Kerr Dental, www.kerrdental.com) is best avoided with IDS due to some evidence of compromise of the resin cement bond following exposure to eugenol-based cements.8 There has, however, been evidence to the contrary—especially in combination with the use of IDS.9 Perhaps more critical in terms of clinical application and efficiency, eugenol-based cements have failed to provide adequate retention during the provisional phase in use with onlay preparation designs lacking in macro-mechanical retention.

In response to these difficulties and inconsistencies, the authors have developed a technique for porcelain onlay provisionals that has proven to be clinically exceptional at meeting the four criteria of a successful provisional (protecting, holding contacts, retention, ease of removal). This technique has had no instances of visible leakage, holds both occlusal and interproximal contacts, is easy to remove, and cleans up easily upon removal. The authors have experienced no instances of patient-reported postoperative sensitivity, although this is most likely attributable to the implementation of the IDS technique rather than the use of reverse spot-bonded (RSB) provisionals.

After tooth preparation, the dentin is etched and bonded with a total-etch, three-step system (eg, Optibond FL®, Kerr Corporation; All-Bond 3®, BISCO, www.bisco.com) (Figure 1 and Figure 2). After complete curing, the enamel margins are lightly re-prepared with a fine-diamond bur to ensure that there is no resin at the margin (Figure 3). The oxygen-inhibited layer is removed through air-abrasion, use of an alcohol swab, and air-blocking, and a final PVS impression is taken. The impression is reviewed under strong magnification to ensure that all critical areas are properly recorded and that there is no evidence of unset PVS impression material (Figure 4 and Figure 5).

In order to lightly bond a provisional to the IDS-prepared tooth, the provisional must bond to the tooth only in a small area. This area must be placed well away from the margins to facilitate cleanup at the cementation appointment in the event that a small portion of the provisional remains bonded to the IDS surface.

The process for RSB provisionals is as follows:

Step 1: In the middle of the prepared tooth, away from the margins, a small increment of fast-setting condensation silicone (eg, Fit Checker™, GC America, www.gcamerica.com) is placed so that it covers approximately a 2-mm to 3-mm circle of the bonded surface (Figure 6 and Figure 7). The silicone should not cover the enamel margins, nor should it cover the entire IDS surface.

Step 2: The entire surface of the prepared tooth and the adjacent interproximal surfaces are coated with an intraoral separating medium (eg, PRO-V COAT®, BISCO) and air-dried.

Step 3: The silicone block-out is carefully removed, exposing a 2-mm to 3-mm area of bonded dentin surface, while the rest of the preparation remains coated with the separating layer. This leaves a preparation ready for provisionalization, which has a small active bonding area defined by the silicone block-out. The remaining portion of the bonded preparation surface will not bond to the bis-acryl material due to the presence of the separating film.

Step 4: Using a well-adapted and trimmed matrix (Figure 8) from the preoperative state or an idealized mock-up, bis-acryl provisional material is injected into the matrix, transferred directly to the preparation, and allowed to fully set. It is important to allow the material to reach a complete set. If the matrix is prematurely removed, the provisional will often come off in the matrix rather than remaining on the preparation as desired.

Step 6: The provisional is then cleaned of any excess material with a No. 12 scalpel, and occlusal contacts are checked, adjusted, and polished as needed (Figure 9 and Figure 10). With a well-prepared matrix, the amount of cleanup and adjustment required is minimal.

Cementation: At the cementation appointment, the provisional is gently removed with a small spoon excavator, with special care taken to avoid any damage to the margins of the tooth. A small amount of bonded bis-acryl often remains in the center of the preparation where the provisional was bonded. This is removed with a small spoon excavator. The entire preparation is thoroughly cleaned with gentle air-abrasion and examined before fitting and cementing the restoration.

The authors have yet to experience any significant difficulties (eg, loss of retention, leaking, or wear) using this provisional method for periods lasting up to 6 weeks. However, there have been a few instances of provisionals that proved difficult to remove at the cementation appointment, likely due to insufficient use of the separating medium. Through the use of this technique and those described elsewhere in the literature, the use of IDS has become highly beneficial due to its increase in long-term dentin bond strengths.