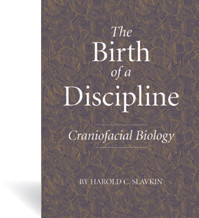 The Birth of a Discipline: Craniofacial Biology

FEATURES: In this eclectic personal history, Harold C. Slavkin explores the forces behind biological and cultural changes, focusing on how the field of craniofacial biology has evolved. The author vividly describes the ideas and events that played out over the last two centuries that not only shaped craniofacial biology, but have begun to impact other research and healthcare areas. Published by AEGIS Communications.

CHAPTER 1: Through My Prism: On Becoming a Midwife to Craniofacial Biology

CHAPTER 3: From “Fish to Philosopher”—Defining The Problem

CHAPTER 5: Evo-Devo Informs the Evolution of the Modern Human

CHAPTER 9: Reflections on My NIDCR Experience: The Art, Science, and Politics of Advocacy

Harold C. Slavkin, DDS, has spent nearly five decades engaged in biomedical research focusing on craniofacial developmental biology. He was director of the Center for Craniofacial Molecular Biology at the University of Southern California (USC). In 1995 he took a leave of absence to serve as the sixth director of the National Institute of Dental Research (NIDR), one of the National Institutes of Health (NIH)(1995-2000). He was instrumental in a name change for the Institute to become the National Institute of Dental and Craniofacial Research (NIDCR) in 1998. Slavkin and his team served as the lead agency for the first-time ever Surgeon General’s Report “Oral Health in America” released in May 2000.