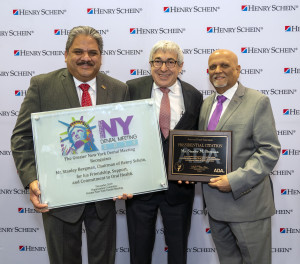 Henry Schein, Inc., has announced that Stanley M. Bergman, the Company’s Chairman of the Board and Chief Executive Officer, was honored at the President’s Luncheon during this week’s 2019 Greater New York Dental Meeting (GNYDM) for his leadership in advancing diversity and inclusion in dentistry. Mr. Bergman was presented with a Presidential Citation by Dr. Chad Gehani, President of the American Dental Association (ADA), and a special recognition award by Dr. Lauro Medrano, GNYDM’s General Chairman.

“I am honored to accept these awards on behalf of Team Schein and the countless colleagues in the dental industry who have been strong allies in fostering an environment in which diversity and inclusion are woven into the fabric of the dental profession and our industry,” Mr. Bergman said. “As a result, we have seen the profession expand to more fully reflect the ever-growing diversity of our country, to strengthen the practitioner-patient relationship, and to improve public health. I speak for all of Team Schein when I say thank you to the ADA and the Greater New York Dental Meeting for this honor.”

To demonstrate its commitment to diversity and inclusion, Henry Schein’s Women’s Leadership Network joined several industry partners to host the Women Dentists Leadership Conference during the GNYDM. Featuring women leaders from dentistry and other key stakeholders, the program aimed to empower and mentor current and future women dentists to utilize their talents and reach their full potential.

“It is fitting to present Stanley Bergman with this award at the Greater New York Dental Meeting, in a city where diversity is valued and cultural differences are celebrated,” said Dr. Medrano. “Congratulations to Stan and all of Henry Schein. With your leadership we have spent years opening doors and expanding opportunities to ensure that our industry reflects the populations and communities we serve.”

Henry Schein has helped drive this conversation for more than two decades. For example, the Company was one of four founding corporate sponsors of the ADA’s Diversity in Leadership Institute, which was created to foster leadership training and a corporate mentoring network within the dental industry in order to improve the business management skills of dentists from racial, ethnic, or gender backgrounds that have been underrepresented in such roles. Henry Schein also provides financial and logistical support to many outreach missions within the US and abroad.

“Stanley Bergman and Henry Schein have been a driving force in expanding opportunities in dentistry for years, and our industry is stronger for it,” said Dr. Gehani. “Stan has long been an invaluable partner in our work to make diversity and inclusion a cornerstone of the American Dental Association, and we congratulate him and Team Schein on this much-deserved award.”