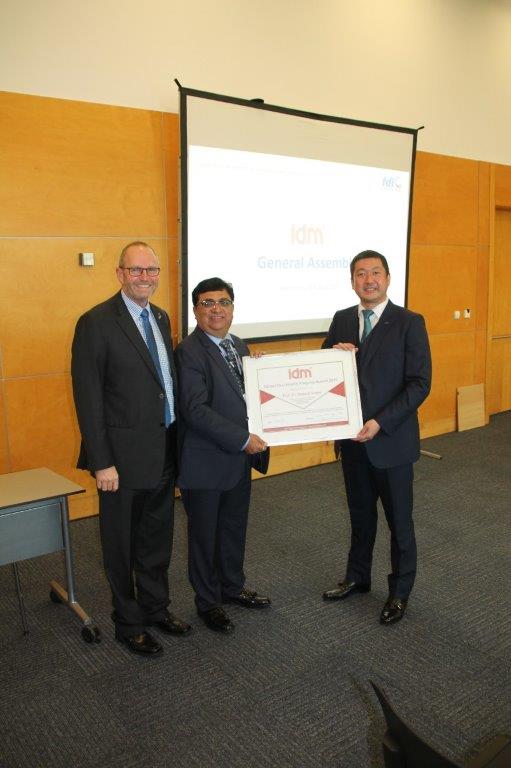 IDM (International Dental Manufacturers) announced today that Prof. Dr. Mahesh Verma, Director/Principal of the Maulana Azad Institute of Dental Sciences and President of the Indian Academy of Restorative Dentistry, will be presented with the second annual IDM Global Oral Health Progress Award during the FDI World Dental Congress in Madrid on August 30th. The 2017 award recognizes Dr. Verma’s many years of service to the dental profession and valuable contributions to furthering global oral health, particularly in emerging markets and through participation in national and international academies and associations. The annual IDM Global Oral Health Progress Award provides a donation in the recipient’s honor to the charity of their choice.

“Dr. Verma’s visionary dedication to raising the standards of oral health care in India has culminated in his long-time leadership of the widely renowned Maulana Azad Institute of Dental Sciences,” said IDM president Dr. Kiyotaka Nakao. “Under his leadership, its worldwide affiliations have set a benchmark in dental education and dental care.”

Founded in October 1988 in Washington, DC, the IDM (International Dental Manufacturers) is the source of information for a global level playing field. The organization serves as a communication forum, and has developed into an autonomous, independent umbrella organization that globally represents the common interests of member associations. Through them, the IDM supports the interests of the global dental industry and trade as a whole.

Prof. Dr. Verma serves in numerous global oral health positions, including as a member of the Global Child Dental Health Task Force in the United Kingdom, Chairperson of the Research Committee for Dental Sciences at Indian Council of Medical Research (ICMR), and President of the International Association for Disability and Oral Health (IADH) India Chapter, among others. A recognized published author, Dr. Verma has received many awards for his contributions to oral health and medical sciences including Dr. B.C. Roy National Award, the highest medical award presented by President of the country. He is also recipient of “Padma Shri” the fourth highest Civilian Award in India presented by President of India in 2014. He is also the past president of the Indian Dental Assoication, the International College of Dentists (India, Sri Lanka, and Nepal section), Indian Prosthodontic Society, and Pierre Fauchard Academy (India section), among other organizations.