If there were ever a time when we all could use an escape from what we are going through, that time is now. I am not saying we have not been through worse, and I do not mean to make light of any tragedy you may have experienced. Of course, my heart goes out to any person or business that has suffered due to the COVID-19 crisis. I only wish to say, "Come with me on this journey, even if it's for a little while."

More and more each day, we are integrating digital technology into our daily lives. Especially during the COVID-19 shutdown, when we have been unable to connect physically, we have been doing everything possible to connect virtually. For many people, that includes Skype, Zoom, Teams, or FaceTime. But in the not-too-distant future, that description may evolve to also include virtual reality and augmented reality, or VR and AR, respectively. They are not part of some theoretical post-apocalyptic binge series; these are real capabilities available today. These two technologies often get combined or confused with each other, but they are separate, viable concepts.

Virtual reality may be more commonly associated with the gaming community; it is a major powerhouse in that sector. Why? Because it is completely immersive. Virtual reality typically includes a headset, with controllers and headphones optional. Once you immerse yourself in that environment, you feel like you are there. Naturally, the gaming community saw the advantages early and has thrived in that space. Others, however, have explored the capabilities of VR, and it has proven to offer many advantages, seen and unseen.

Perhaps one of the most impressive applications of VR is in the education sector. Taking virtual field trips can be a powerful experience. For example, a Harvard instructor recently took American and Chinese students on a VR tour of Egypt (Figure 1). Video and CGI (computer-generated imagery) have been common for several years, but VR offers the ability to see and hear with a 360-degree view, and to have control over where you look and move, rather than a director deciding what you see. My family loves to watch nature documentaries and series together, but when my 2-and-a-half-year-old daughter went on a National Geographic elephant safari in VR, the impact it had on her was undeniable.

Just imagine utilizing this powerful technology with endless possibilities in dentistry and restorative dentistry! It would be possible to design a restorative case in mid-air using VR, virtually peeling away layers or adding layers as you work virtually on a case. The future of dental laboratory technology, specifically diagnostics and design, can theoretically be performed using VR and AR, which will provide the dental technician the ability to work up a case with enhanced perspectives on the patient and the restorative protocol at hand. Because of this, many medical skills are now being developed in VR to better train and reach people all around the world. So VR is not just for games; it is a very powerful and cost-effective tool. Because of the low introductory hardware costs, we likely will see VR utilized in many aspects of our world in the future.

Augmented reality (AR) is like VR's cool brother who gets all the attention. Very simply, AR technology entails using some type of device or hardware to alter or modify what you see. It is not completely immersive like VR; it involves modifying or augmenting one part of your environment. Some of the most recognizable examples of AR are in popular apps such as Snapchat, Instagram, and FaceApp that can, for example, put a bunny face over your own in real time using your smartphone video camera or make your face look more or less aged by overlaying or smoothing wrinkles in your live video image. There are more professional examples, too. The medical field has tested Microsoft's HoloLens for examining the human body virtually (Figure 2). Oral surgeons and universities are testing the technology to overlay/view a CT scan on the patient as they work.

Even closer to dental laboratories, Ivoclar Vivadent has shown its IvoSmile technology at the International Dental Show (IDS) in Cologne, Germany. This software application allows users to visualize the possibilities for esthetic dental makeovers directly on the patient. Additionally, some dental professionals have used smart glasses such as Epson's Moverio or Google Glass, whose embedded screens allow the wearer to view a scan without taking their eyes off the patient. This has been reported as a enhancement to the patient experience and to the clinician, since they do not need to turn their head to view the screen and can instead remain focused on the patient. 3Shape also introduced a form of AR utilizing artificial intelligence at the most recent IDS; the newest TRIOS intraoral scanner is able to recognize and eliminate any artifacts or noise that are ancillary to the intended scan, such as the lips or the inner portion of the cheeks.

Clearly, AR is the technology of choice for real-time, real-world experiences. However, it may be limited to the professional sector due to the cost of hardware needed to access it. The most affordable devices that use AR are smartphones and tablets, which are still somewhat expensive. The Microsoft HoloLens costs nearly $4,000. While AR may be the brother that gets all the attention that VR wants, the price tags attached to the AR hardware and development keep it out of reach for many users right now. Of course, some dental professionals may be able to find creative ways to absorb those costs.

Regardless, should you pay attention and dive into these technologies? The short answer is yes. VR was one of the top 10 gift items for the 2019 holiday season, and most brands were sold out. They restocked and quickly became sparse again once COVID-19 hit our shores. One VR company, Oculus—acquired in 2014 by Facebook, Inc. for $2.3 billion—announced in 2019 that it had sold $5 million worth of content for the Oculus Quest in just 2 weeks. Just wait until the numbers are available for content sold during this pandemic!

Even if you are hesitant or skeptical about these technologies, you cannot deny the wave that they have already created. The power of these technologies will be—and already is—in the hands of younger generations. The question is not whether VR and AR will be part of your life; rather, will you be a part of it?

More from the Expert 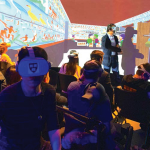