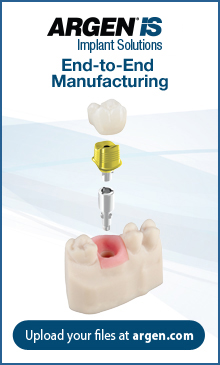 Renowned consultant and statistician W. Edwards Deming, PhD, the father of total quality management and author of Out of the Crisis, first published in 1986, famously said, “It is not necessary to change. Survival is not mandatory.” This is not shared to alarm, but rather to inform. We cannot control how the world and the profession we have chosen will evolve and pose new challenges, but we can control how we plan in order to effectively respond to these changes by staying close to the customer.

Today, for example, dental laboratories have an opportunity to capitalize on an imminent growth trend involving a technology that was introduced 20 years ago and shows great promise for adoption in today’s modern dental practice: digital impression systems. A recent survey indicated that only 18% of dentists used a digital impression system in 2015 but that 19% planned to buy one within the next year,1 which would double the percentage of digital impression systems in use. If that buying trend holds true to the survey response rate, it could take just 12 months to accomplish 20 years’ worth of progress. If that happens, is your business prepared to capitalize on the opportunity?

The Technology Adoption Lifecycle, or Rogers’ Bell Curve, is a sociological model that is an extension of an earlier model called the diffusion process. Originally published in 1957 by Joe M. Bohlen, George M. Beal, and Everett M. Rogers at Iowa State University, this model was later expanded to become the Everett Rogers Diffusion of Innovations Theory. The theory is an insightful explanation of the conditions that indicate at what point an innovation will reach its adoption tipping point. It categorizes five groups of people based on their technology adoption comfort zone.

Tipping Points: The Mechanism of Diffusion

Diffusion is the process by which an innovation is communicated through certain channels over time among the members of a social system. Given that decisions are not authoritative or collective, each member of the social system faces his/her own innovation decision that follows a five-step process:

The innovation decision is made through a cost-benefit analysis for which the major obstacle is uncertainty. People will adopt an innovation if they believe that the end result will enhance their utility. They must believe that the innovation may yield some relative advantage to the idea it supersedes. They also must determine to what degree the innovation would disrupt other functioning facets of their daily life, such as existing habits and values. The newness and unfamiliarity of an innovation infuse the cost-benefit analysis with a large dose of uncertainty.

In dentistry, recent dental school graduates are more likely to quickly gravitate toward technological innovations such as digital impression devices. Their generation grew up with technology and is quite comfortable using it. They don’t have the same reluctance to work without a physical model that older dentists do. They are efficient and at ease working in a virtual environment, and they will expect the same from their laboratories.

So how can laboratories prepare for this generation of dentists and those that follow? The first step for laboratories is to seriously consider investing in a laboratory scanner. It is important to be able to accept scan files in STL format from any intraoral impression system. STL is a file format native to stereolithography CAD software.

Also known as tessellation language, STL refers to the representation of 3D forms as boundary representation solid models constructed entirely of triangular facets. The structure is rather like a geodesic dome, but one capable of representing—as a single entity—just about any free-flowing form that can be milled thanks to new developments in CAM technology embedded in dental milling operating software.

Another key consideration for laboratory owners and managers is whether you and the clinician client are ready to work without a physical model. This is a large leap of faith, but many laboratories are doing it. If you or your customer want a model, however, you will need to decide whether to print or mill it. Primary concerns for either method are accuracy, speed, and capacity. The cost of the resin used in printing or the PMMA or acrylic used in milling also must be taken into consideration. Printers usually require that proprietary liquids be used.

Outsourcing this part of production is another option. Run the numbers and carefully calculate your ROI on the purchase of a printer or mill for generating physical models. But do not forget to include the cost of fully burdened labor (hourly rate plus overhead and benefits) as well the cost of materials and maintenance. Be sure training is included and check references for feedback on that company’s technical support after the sale.

Talk with your dentists about how they view the adoption of new technologies. In some cases, by being well informed you can help guide them, thereby being a resource and trusted advisor. Attending a lecture or hands-on demonstration of digital impression technology together and then discussing how they might implement it and how your laboratory will support them can be helpful. That is taking a leadership role versus sitting back and letting the world dictate how you will do business and survive.

Frank Manfre is a Key Account Manager for Ivoclar Vivadent, a board member of Georgia Academy of Cosmetic Dentistry, and an advisor to the Georgia Dental Lab Association.