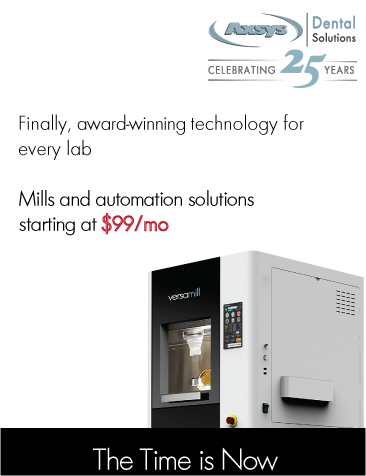 The Role of Sintering Ovens in a Transformed Laboratory Industry

Stepping up to the demands of new restorative materials and processes

In recent years, the laboratory industry has been transformed by numerous changes, including the introduction of progressive new materials and specialized equipment. Today, instead of using belt-driven handpieces to manually contour restorations, technicians are using computers to digitally design the contour. Similarly, the casting machines used for fabricating porcelain-fused-to-metal restorations are sitting idle as the industry moves to meet the increased demand for zirconia and its sintering process. An industry once steeped in the lost-wax technique as the standard protocol for fabricating crowns and bridges has adopted CAD designing, milling, and sintering as the new status quo.

Impact of Equipment and Material Advances on Restoration Fabrication

In conjunction with equipment advances, the industry has also seen the introduction of new materials. Although zirconia is somewhat new to the laboratory profession, it is now an industry staple because it is strong and esthetic, and the restorations require less manual labor to produce than those that contain metal. There once was a time when, regardless of the treatment plan, all fixed and removable prostheses were created solely by hand. However, present day treatment plans are commonly carried out using digital technologies and then restored without metal and without the use of traditional analog benchtop methods and procedures.

In short, modern materials such as zirconia and new equipment such as the sintering oven have transformed the industry from a time-intensive manual production process to a streamlined digital workflow in which restorative options and restorations are manufactured in a virtually hands-free production process.

So what exactly is sintering? It can be defined as a high-temperature process used to form a solid mass without melting to the point of liquefaction. In our industry this process can only be accomplished with the use of a sintering oven, which has become a standard piece of equipment in most laboratories with the ever-growing use of zirconia.

In fact, it is this sintering cycle that hardens and resizes the zirconia to actual size. Today’s sintering ovens have evolved with the demand for this material. In years past, sintering cycles often took between 6 and 8 hours to complete, after which the material needed time to gradually cool. The cooling-down stage often lasted as long as the sintering cycle itself.

Besides the lengthy sintering and cooling cycles, the opacity of sintered zirconia often made the desired shade more difficult to achieve. In addition, the small size of the sintering trays and large size of the milled pre-sintered zirconia restorations prevented large numbers of units from fitting within the sintering tray. This would often result in multiple sintering cycles, which inhibited production workflow because of the lengthy sintering process. Laboratories could do little to overcome these concerns, because firing cycles were preprogrammed by the manufacturer.

Today’s modern sintering furnaces have addressed and overcome many of the problems of the past.

Manufacturers of sintering ovens are now incorporating a variety of cycles as well as the option to program custom cycles in today’s ovens, potentially allowing the process of sintering to be reduced by hours. These custom cycles, known as “speed” or “short” cycles, have been developed after vigorous testing of temperatures and the amount of time the material is exposed to this heat in stages. It was discovered that full sintering could, in some cases, be achieved in a shorter amount of time while maintaining an accurate fit. These speed cycles are standard in most of today’s sintering ovens and vary from 10-60 minutes, depending on the thickness and the span of the unit.

Another benefit that allows laboratories to save time is the availability of new stackable trays. Firing chambers have increased in size to accommodate larger trays, which can then be stacked so that laboratories can actually double their production potential in one firing.

Today’s sintering ovens continue to give in-house production a boost with new, enhanced cooling cycles. These not only increase the number of restorations that can now be sintered, but once sintered, the cooling cycle brings the temperature of the restorations down in a fraction of the time once required. This fast cooling rate is due to the addition of multiple fans—up to 4—installed specifically for this reason.

Energy efficiency has been built into the new sintering ovens currently on the market. This saves not only time through shorter sintering and cooling cycles, but also energy through less power consumption. Many older ovens would consume up to 10kWh during the sintering cycle, compared to 2kWh of energy now used in more modern ovens for a single sintering cycle. The energy savings is due in large part to new thermocouples that are made of platinum and better insulating materials as well as enhanced heating elements.

Where translucency is demanded, milled zirconia restorations can be fired up to 3,000°F in today’s ovens. This high temperature is an esthetic boost because it exposes the opaque material to extremely high temperatures, enhancing the translucent appearance. This is ideal for many of today’s new full-contour zirconia designs.

Quality has not been compromised in any way with these new features. In fact, new bottom-load designs contribute to more even heating, while new heating elements aid in eliminating the “greening effect” while also ensuring that restorations are still fully sintered and sized accurately.

The sintering oven is a key component in today’s laboratory and is a testament to the industry’s progress. New sintering ovens have been redesigned inside and out; the outer frames have more ergonomic designs, making them more compatible with today’s smaller benchtop work areas. Touch-screen controls and even remote control programming access have made operating a sintering oven very user-friendly.

Many modern ovens have also become more material-friendly by offering a variety of sintering capabilities based on the material that is being sintered, such as the new green state millable chrome cobalt metals that must be sintered in an argon gas atmosphere. Thanks to temperature testing, these new sintering ovens, when combined with advanced versions of zirconia, can now produce an all-zirconia restoration that is more translucent and esthetic than restorations that were produced just a few years ago. In fact, a full- zirconia posterior restoration is one of the most requested prostheses prescribed by today’s clinicians.

As a result, the sintering oven has been redesigned to cater to esthetics as well as high production demand, becoming a key component in today’s laboratory.