In crime-scene investigations, teeth have a story to tell and dental assistants a role to play.

Forensic dentistry is one of the most rewarding and exciting subspecialties of dentistry. For over 15 years, this author was the forensic odontologist for the Ramsey County Medical Examiner in Saint Paul, Minnesota. In that capacity, the author handled more than 70 cases and would like to share some experiences, which, fortunately, dental assistants have so willingly participated.

A formal definition of forensic dentistry would be: “Dentistry as applied to the law.” However, that does not sufficiently define the broad scope of forensic dentistry. Situations a forensic dentist might encounter range from civil issues such as identification of deceased individuals who, by virtue of circumstances of death or advanced decomposition, cannot be visually identified, to identification of mass-disaster victims, to criminal cases that involve dental evidence, such as bite marks and oral injuries.

Bite-mark evidence and dental injuries are common in abuse cases, primarily involving children, but it is also associated with elder abuse and violent crime. Why people bite others is unclear, but some believe it may be a form of rage expression.

Cases shown on forensic TV shows portray bite-mark evidence as conclusive and leading directly to identification of a perpetrator. However, this is not always reality. Much like the inaccuracies in impression material, skin is similarly difficult for obtaining accurate impressions, if not more so.

Few cases can conclusively be proven using bite-mark evidence alone. In one case, a body with more than 100 bite marks was found. The bites were extensive and deep enough that most of the perpetrator’s individual tooth characteristics were well-recorded on the victim’s skin.

In another definitive case, there were only three suspects. The bites on the victim’s body indicated that the upper right first bicuspid of the biter was missing the buccal cusp. Two of the suspects had intact bicuspids, which left the third as the guilty party. After being confronted with this evidence, he confessed, and then was convicted and sentenced to prison.

Bite-mark evidence has a place in crime-scene analysis, but it has limitations. In some instances, a bite mark can be measured and used to determine whether an individual can be excluded from a group of suspects. Beyond that, individual tooth characteristics such as rotations, missing teeth, malformations, diastemas, and occlusal and incisal anatomy need to be present to positively identify the biter. Consider also that when an individual is being bitten, that person is likely moving in an attempt to ward off the injury. Thus, a bite on an arm would elicit the following question: What was the position of the body part when it was bitten? Most bite marks demonstrate a “drag pattern,” which represents movement of the biter or victim during the assault. This further distorts individual tooth characteristics. Bite marks can be used for inclusions or exclusions but rarely for a definitive identification of the biter. In an ideal situation, a bite mark should be swabbed for DNA while the victim is at the crime scene; this evidence could positively identify the biter. Bite marks are not fingerprints and should be used cautiously when presented as crime-scene evidence.

When bite-mark evidence is associated with a crime, it is necessary to consider the bite might be from the victim. During the perimortem time (when an individual is dying), a victim may self-bite as a way to assuage the fear and pain associated with the assault. In Maplewood, Minnesota, there was such a case, which led the investigation astray until the bite mark was analyzed.

On the victim’s right wrist was a bite mark and the immediate assumption was that it was from the assailant. When the assailant (her new boyfriend) was arrested and impressions were made of his dentition, it was obvious that his arch width was far too great to have been the biter. At the morgue, impressions were made of the victim and it was determined that she had bitten herself during the assault.

An identification begins with what is called a putative identification, meaning evidence is sufficient (purse or wallet, witness, a person known to be missing, etc.) to at least suspect who the deceased individual is. Based on that evidence, the individual’s dentist is located and dental records are requested. People living in the deceased’s neighborhood can be helpful in locating the dentist as can insurance papers, bills, and other correspondence from the dental office. Indigent individuals who are homeless or are treated within the welfare system are not so easily identified because dental records are scant. Typically, they have been seen by various dentists, sometimes at missions or emergency clinics; few have regular dentists.

A forensic dentist will spend most of the time performing dental identifications on individuals who, due to circumstances of death or decomposition, cannot be visually identified by someone who knew them. This may entail simply taking x-rays on the deceased and comparing them with x-rays of who the person is presumed to be or may entail a removal of the jaw before x-rays can be taken. This would be the case with individuals who have been badly burned as the dental structures are so fragile that they require careful removal before x-rays can be taken.

Identification cases are not pleasant, especially when decomposition is concerned. Consider the case of a male who died a natural death in his home. Although it was suspected who the individual was, a definitive identification was necessary to satisfy the family and to obtain a certified death certificate. He died during August when the heat and humidity were high, so a great deal of decomposition had occurred. His face had been protected by the pillow and therefore was shielded from the preserving effects of the air-conditioning.

Often, especially in burn cases, the evidence presented to the forensic dentist is minimal. There may be portions of teeth or restorations but no complete dentition. There may be evidence of roots and sinuses that can be compared to antemortem (before death) x-rays but no actual teeth. Because of their unique nature, sinuses are often used for identification, especially if there is evidence of roots below them.

In one instance, when a body was recovered from a fire pit, the burning was so complete that all investigators had were several fractured pieces of teeth and the crown (minus the enamel) and a partial root of tooth No. 18. When teeth are subjected to high temperatures, the organic portion of the tooth, the dentin, expands and the surrounding enamel separates from the dentin. In addition to the dental remains, pieces of bones from nearly all parts of the body were recovered and an anthropologist was able to determine that the remains belonged to a young woman whose age and body size were consistent with the female who had been abducted.

It turned out that tooth No. 18 was the key to the case. Just a few weeks before the abduction, the victim’s dentist had placed occlusal amalgam restoration in tooth No. 18 and bonded it in place with a new dental resin cement. This was an unusual application of the product. When the restoration and surrounding dentin were analyzed, it was determined to contain zirconium, which was one of the elements in the manufactured product. Her dentist testified that she had indeed placed the restoration and bonded it with this new dental resin cement just a few weeks before the victim died. In addition, evidence of zinc oxide was found in the dentinal tubules and charting by her previous dentist indicated that a zinc oxide base had been placed in that tooth nearly 10 years earlier. The successful prosecution of this case speaks to the importance of thorough and accurate dental charting.

Forensic dentistry plays a vital role in the identification of victims in mass disasters. When multiple victims are to be identified, forensic dentists can create staging areas where victims are examined, x-rays are taken, postmortem charting is done, and antemortem (before death) records are obtained. In the case of an airline disaster, the passenger manifest is obtained to begin the collection of antemortem records. A computer program, designed by a forensic dentist, is available to assist in the cataloging of data and greatly assists in determining the probability of a correct identification. What makes mass fatalities problematic is what is called comingling. Take, for an example, an airline accident. Impact occurs at hundreds of miles per hour and bodies and body parts get mixed together to the point that one cannot assume that dental evidence found in or near one individual necessarily belongs to that individual. Add to that the burning that usually occurs, and the situation becomes complicated.

Even if burning does not occur, identifications can be difficult. In 1995, ValuJet flight 395 crashed in the Florida Everglades. Impact speed was estimated to be over 485 miles per hour, and the impact was on limestone covered by 18 inches of water. The plane disintegrated upon impact, and the 110 victims became more than 4,000 pieces of human tissue, weighing approximately 4,000 pounds. This gives an idea of the extent of fragmentation of the victims. DNA was not an option due to the large number of victims involved and the contamination from fuel and hydraulic fluid. A team of professionals made the identifications, and many victims were identified by jewelry on fingers, toes, and ear lobes; unique fingernail art; tattoos; and medical devices. Only three passengers were identified dentally, because of the lack of dental remains; being heavier, these remains sunk to the bottom and were never recovered. All 10 children who were on the flight were identified by wrist and other skeletal fragments that were recovered, but only three were also identified dentally. Interestingly, their estimated dental ages were consistent with the age estimates by the anthropologists.

The dental assistant can play an invaluable role in forensic dentistry, including casework and office charting. As alluded to earlier, dental records play a huge role in identification cases. When a dental chart is received by the medical examiner, it should include original charts and x-rays, not copies. Too often these charts are illegible and abbreviated, and x-rays poorly taken, something that can be easily avoided. In one instance, a chart arrived at the medical examiner’s office with notations “referred to perio” and “referred to endo” without the specialists’ names. In this case, it was necessary to contact the dental office to determine who the specialists were so that additional films could be obtained. When poor charting is presented to the medical examiner, it can result in an embarrassing situation for the dental office.

An interesting nuance has emerged with the advent of digital x-rays. Often the bony trebuclae between and around the teeth and maxillary sinuses are unique enough to be an adjunct for identification. When digital x-rays are printed
on smooth, glossy paper, there is sufficient detail for use in identification. However, many offices will duplicate digital films on coarse paper, which obliterates the detail needed for identification. Keep this in mind if your office is asked for dental records for a suspected deceased individual.

Dental assistants can provide a needed role in forensic dentistry to help make or break the case. 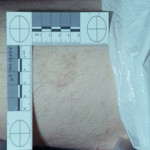