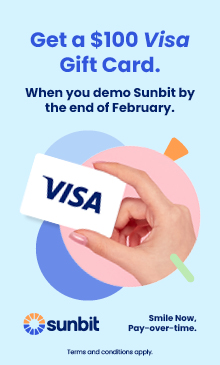 A quotation on the wall of BDG Dental Services' headquarters in Las Vegas, Nevada, states, "We are in the business of helping and growing people; we just happen to be in the field of dentistry." That is the philosophy of founder and CEO David Ting, DMD, and COO Ryan Heroy, EMBA, says that the entire team has bought into it. Heroy adds that the structure that Ting set up for the group practice helps them deliver on that promise. "We are privately owned, so we have a lot more control of the care that we can provide to our patients," he says.

Heroy joined BDG Dental Services in 2010 as director of marketing and quickly found an affinity for the operations side of the group practice, which has grown from 11 locations to 17 since that time. "I never thought that I would be in the dental arena," Heroy says, "but I worked my way up and was able to really dive into operations."

The organization includes several subsidiaries that support the clinical operations, including an academy for dental assistants, a continuing education program that brings in premier speakers from around the world, an onsite dental laboratory, a company that handles the back-office billing, a dental supply company, and a nonprofit that helps provide treatments for patients in underserved areas. "We are in the dental field with our offices," Heroy says, "but we also provide a ‘dentistry in a box' setup to help support those offices." The entire operation is privately owned by the providers.

Nonetheless, much of what BDG Dental Services could provide to its patients was determined by third-party financing companies. Traditional financing options were providing approval rates of approximately 35% to 40%, which meant that 60% or more of their patients who applied to finance treatments were leaving without receiving that care. "When that many patients are walking out the door untreated," Heroy says, "it really affects the overall community."

At perhaps the most unlikely of times-in July 2020 when BDG Dental Services was focusing on updating their infection control protocols during the height of the COVID-19 pandemic-they decided to try Sunbit, a buy now, pay later technology for everyday needs and services that is becoming increasingly popular in dental offices. "What really sparked our interest was Sunbit's claim that more than 85% of their customers are approved," Heroy says. "Because most of our offices are in lower income, underserved socioeconomic areas, being able to approve so many of those patients with Sunbit is very powerful. The production and financial aspects are secondary to the patient care that we can now provide to those who previously could not afford it." Other financing options exist for subprime patients, but Heroy notes that many of those companies make the practice assume the risk in cases in which the patients fail to pay. With Sunbit, the practice gets paid right away, and in the event of a default, the practice is not held responsible.

Sunbit is also of interest to patients with prime credit scores. It differentiates itself by providing approvals digitally in approximately 30 seconds, whereas other companies that BDG Dental Services has worked with often used paper processes and typically required a full day. "So many of our patients are able to begin their treatments the same day," Heroy says.

Another differentiator is the available limit, which was recently raised to $20,000. "Most other companies stop at $10,000," Heroy says. "We perform a large volume of implant and orthodontic procedures, so the higher limit allows us to do higher-level treatments for our patients, which is really the standard of care now." The rates for prime loans, he adds, are either on par with or better than those of other companies.

On the back end, Sunbit's onboarding process and ongoing technical support really stand out as well. For a practice with 17 offices, that is critical. "So many vendors entice you to buy their products, and then you never hear from them again," Heroy says. "With Sunbit, we have monthly education and training, and we have a designated support person. From that standpoint, it really is an unmatched financing option for us." Regarding ease of use, Sunbit's technology makes the process seamless. "Team members at any of our offices will tell you that the difference between what we were using previously and Sunbit is like night and day," Heroy adds.

According to Heroy, he was initially in disbelief when Sunbit mentioned achieving a more than 85% approval rate, but he confirms that BDG Dental Services has seen that play out throughout the past 2 years, with more than 2,000 applications, nearly 90% of those patients approved, and more than $2.5 million in additional revenue generated. Heroy notes that approximately 72% of their approvals are for patients with subprime credit scores. "Without Sunbit, we would be missing out on quite a bit of revenue," he says. More importantly, BDG Dental Services' ability to fulfill the CEO's mission of helping and growing people has been transformed. "From a patient's perspective, filling out three or four forms, completing a hard credit check, and walking out the door uncertain if any of them will be approved can be very stressful," explains Heroy. "It is a breath of fresh air for us that Sunbit is able to offer a frictionless and inclusive payment option that enables us to serve so many patients who would otherwise go untreated. I expect Sunbit to have a huge impact on the industry. It is a game changer."

Account openings and payment activities are reported to a major credit bureau. Loans are made by Transportation Alliance Bank, Inc., dba TAB Bank, which determines qualifications for and terms of credit.