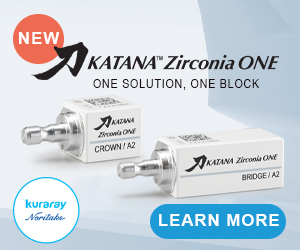 Following a December 14, 2016, US Food and Drug Administration Drug Safety Communication regarding concerns about the long-term effects of deep sedation and general anesthesia on the developing brains of children younger than 3 years, there has been increased demand from parents for minimally invasive treatment options that can help to avoid or delay the need for sedation for the restoration of dental caries. In one emerging treatment modality, which is described in this case report, atraumatic restorative treatment (ART) is performed using a glass hybrid restorative system and strip crown forms.

A healthy 2-year-old boy presented with asymptomatic severe early childhood caries affecting his maxillary primary incisors (Figure 1). His mother was presented with treatment options ranging from active surveillance and silver diamine fluoride to sedation and prefabricated crowns. She did not want him to undergo sedation, so she opted for ART.

After polishing with plain pumice, the lesions were shiny and hard, indicating that the caries was already inactive/arrested. Following the principles of the International Caries Consensus Collaboration's recommendations, hand instruments and/or a slow-speed round bur could have been used to selectively remove any soft dentin while being careful to avoid mechanical exposure of the vital pulp. The 2019-2020 Reference Manual of Pediatric Dentistry's best practice recommendation on pulp therapy for primary and immature permanent teeth notes that indirect pulp capping has been shown to have a higher success rate than pulpotomy in long-term studies; therefore, it is preferable to pulpotomy when the pulp is normal or exhibits reversible pulpitis (Figure 2).

Appropriately sized strip crown forms (Pediatric Strip Crown Kit, Nowak Dental Supplies) were selected (Figure 3) and trimmed as needed to achieve an ideal fit (Figure 4), then a lingual vent was placed in each to allow any excess material to flow out (Figure 5). After the teeth were conditioned for 10 seconds with 20% polyacrylic acid (Cavity Conditioner, GC America), which enhances chelation and chemical bonding, it was rinsed off, and the teeth were dried, but not desiccated, because glass restoratives are hydrophilic and require the presence of moisture to set. Next, a highly filled glass-ionomer restorative (EQUIA Forte® HT Fil, GC America) was mixed and immediately loaded into the crown forms (Figure 6). The high fluoride release of this material helps to arrest and remineralize caries lesions, and it seals off the affected dentin from the biofilm while restoring form, function, and esthetics.

Each filled crown was seated with firm finger pressure and, after the quick removal of any excess material, allowed to self cure. For the very young boy in this case, two crowns were placed per appointment, beginning with the maxillary primary lateral incisors (Figure 7). After the material has fully set for a minimum of 3 and a half minutes, or longer to further reduce the risk of fracturing the glass, the strip crown form is carefully removed (Figure 8). Finally, a coating of nano-filled, self-adhesive resin (EQUIA Forte® Coat, GC America) was applied (Figure 9) and then light cured for 20 seconds (Figure 10).

This minimally invasive option is well tolerated by young patients, effective at arresting caries and protecting the pulp, and capable of producing an esthetically pleasing final result (Figure 11). 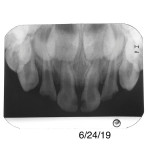