When Michael Moroni, DDS, graduated from dental school in the late 1990s and purchased a practice from a retiring dentist, he immediately set out to modernize it. He wanted to move from amalgam to resin-based materials and porcelain as well as from analog to digital processes.

"That was how I wanted my office to be," says Moroni, who practices in Castle Rock, Colorado. "Once I started down that path, dentistry became more interesting to me."

Moroni practices general dentistry, but he has been doing an increasing number of implants, full-arch and full-mouth reconstructions, and same-day placements. Technology allows this work to be performed precisely and quickly.

"We take impression and cone-beam computed tomography (CBCT) scans, merge the data, and then plan the entire implant or denture case before we even numb the patient or put a scalpel to the tissue," Moroni says. "Being able to digitally prepare a surgical case before making a single cut is fun for me."

These capabilities are especially important considering the demographics of his patient base. Moroni estimates that 70% of his patients are baby boomers who are typically missing at least one to three teeth. As that generation continues to age-the United States Census Bureau says that by 2030, all baby boomers will be older than 65, and 1 in 5 US residents will be of retirement age-being able to cater to the older population's needs becomes more important than ever.

"Technology makes our treatment of these older patients much more seamless," Moroni says.

One issue that can impact the accuracy of a diagnostic image and the quality of treatment for patients of all ages, but especially older ones, is movement during CBCT scans. Moroni says that even the act of swallowing by the patient can render a CBCT scan unusable.

"It is a pretty significant problem," he says. "The cycle might only be 20 seconds, but for the patient who is standing in the machine, it can be a long 20 seconds. This problem is not limited to older patients, either; it is also an issue for fidgety children and even some younger adults. I have had laboratories tell me that some CBCT scans need to be retaken because the ones I sent were unusable. No dentist wants to be in that position."

Planmeca sought to alleviate this issue with its Planmeca CALM™ software for its CBCT units. The software can analyze and compensate for movement and render dramatically improved diagnostic-quality images that are nearly artifact-free.

Moroni admits that he was skeptical at first, thinking that the feature might be a neat gimmick but that it could not possibly work well enough to be truly useful. Upon adding the software, however, he immediately put it to the test and was pleasantly surprised by the results. A 15-year patient needed implants, but he had recently been diagnosed with Parkinson's disease and was already experiencing significant tremors.

"If I had taken a CBCT scan of this patient previously, it would have been a blur," Moroni says, "but the Planmeca CALM software prevented his tremors from translating to the scan. It filtered out all of the movement to produce a readable, diagnostically acceptable image that I could use to plan the case. It is an amazing technology."

Moroni compares this image correction to using Adobe Photoshop® to digitally clean up an image, except that the Planmeca CALM software works automatically to prevent image distortion.

"I don't need to spend any time manipulating the image; the software does it," Moroni says. "It does not require any extra time or effort from the user."

Moroni had already been working with Planmeca's CAD/CAM equipment for several years before adding Planmeca imaging technology, and this new development further reinforced his belief in the company.

"I have been in this industry for a long time, and it is rare to find a company that stands behind both its products and the dentists purchasing those products in the way that Planmeca does," he says. "Now,  the Planmeca CALM software helps me treat patients more efficiently and predictably. It has really revolutionized CBCT imaging." 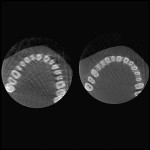