Figure 1 | Officite’s responsive prac­tice websites were engineered as a solution to the explosion of mobile connectivity in recent years. A practice must be able to reach potential new patients over the channels they are most likely to use, including the Internet and mobile devices.

The numbers speak for themselves. Google searches from mobile devices eclipsed desktop searches in May 2015.1 Out of 64% of American adults who own smartphones, 10% have no other access to Internet at home, and 62% use their phone to look up information about a health condition.2

Officite’s responsive designs solve that problem by hard-coding mobile compatibility in the main site itself. An Officite responsive design minimizes load times by eliminating re-directs, helping to funnel more traffic onto the site. It also delivers the complete content of a standard Officite website in any format and stays on top of SEO best practices with Google’s preferred coding style.

Google has publicly stated that they prefer responsive websites to traditional mobile websites. In fact, as of April 2015, mobile sites are now receiving higher search rankings than non-mobile sites, with responsive design being the most highly regarded among them.3 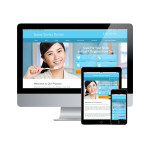