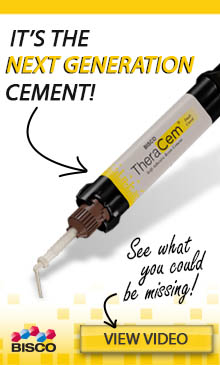 Adhesive dentistry is now the hallmark of modern dental care. Although Buonocore and others first established the concept in the early 1950s, its maturation has taken many twists and turns to arrive at its current state in 2015. Mechanical concepts for attachment to tooth structure are being replaced with adhesive techniques, which emphasize the strength and longevity of the adhesive interface. While we have seen a steady improvement in the reliability of outcomes in the past 50 years, the past 10 years have produced the most pronounced change. Numerous products such as primers, adhesives, and self-adhesive cements have been developed by manufacturers with the emphasis on simplicity of use. Despite their efforts, dentists today express confusion and, to some degree, lack of confidence in terms of the “what, where, when, and how” in clinical application, due to the myriad of clinical challenges and options for bonding. Bonding is predictable with enamel and less so without, and it makes sense to maximize bond strengths whenever possible. In bonding to tooth structure, the “risk tolerance” of dentists may depend upon their objectives when all factors are taken into consideration

These two categories of products—adhesive system with resin cement and self-adhesive resin cement—are staples of nearly every dental office. Procedurally, and in addition to the above indirect and direct needs, adhesion dentistry is used for sealants, glass fiber endodontic posts, prosthetic repair to ceramics and resins, and dentinal sealing/desensitization. Dentists must bond to teeth that have varying quantities of enamel, varying quality of dentin, and clinically deficient preparations. Additional chemicals, such as silane and 10-methacryloxydecyl dihydrogen phosphate (MDP), are needed to bond to the material of choice, and many dentists routinely use other products for disinfection and desensitization. With all of these pieces to the puzzle, it is not surprising that dentists express angst when matching the appropriate adhesive technique to the clinical situation at hand.

Total-etch systems still yield the best overall bond strength results when enamel is present, regardless of the system chosen.1 The more frequent finding of postoperative sensitivity with the use of phosphoric acid is generally associated more with the technique than the phosphoric acid itself.2 Phospohoric acid gel 38% applied for 10 to 15 seconds, rinsed for 10 to 15 seconds, and lightly air dried will produce deeply etched enamel, a demineralized dentin surface (smear layer removal), an upright/fluffy collagen network, and open dentinal tubules. A dual-action monomer in a solvent, such as ethanol or acetone, links the hydrophilic dentin to the hydrophobic adhesive resin. This promotes infiltration of the demineralized peritubular and intertubular dentin with both the monomer and adhesive resin while increasing the wettability of the conditioned dentin surface and the contact between the dentin and resin itself. The partially filled adhesive resin, combined with the primer’s monomers, forms resin tags in the dentinal tubules and a resin reinforced “hybridization zone” 5 to 15 µm thick, which is the basis for the bond of methacrylate groups to resin cement or direct composite.

Bond performance is known to be affected if the collagen network collapses due to over-drying the dentin when employing the total-etch technique.3 The creation of a shallow-to-absent hybridization layer may also lead to postoperative sensitivity; this is caused by incomplete sealing of dentinal tubules, which allows fluid to shift within the tooth when it is subjected to a stimulus such as heat and cold.4

With self-etching systems, hydrophilic acidic primers are left on the tooth to partially demineralize the dentin smear layer, exposing collagen and penetrating the exposed dentin. Resin infiltration occurs at the same time the acidic primer rapidly converts to a hydrophobic state, which is needed to prevent moisture wicking from the dentin, which can degrade the quality of the bond. Because the tubules are never opened and along with less aggressive acid etch, sensitivity is reported to be diminished. In addition to this mechanism of action, fewer procedural steps involved produce less opportunity for operator error.5 Dentinal bond strengths for self-etchers can approach the effectiveness of total-etch systems to dentin but cannot equal those to enamel due to the lower pH of these acidic primers (pH ~0.9-2.8) by comparison to phosphoric acid (pH ~0.6).6 The weaker the acidic primer, the more shallow the etch pattern on cut enamel, and even less so on uncut enamel compared with phosphoric acid. Since enamel bonds are known to be stable over time, unlike dentin bonds, which are known to degrade over time, it is a reasonable goal to maximize enamel bonds whenever possible.7

For the aforementioned reasons, combining selective etch of enamel with phosphoric acid and self-etchers has been suggested. However, the problem here is that either through application or removal, there is the potential to cross-contaminate dentin, possibly mitigating the effectiveness of the acidic primers. More to the point, if self-etch systems are deliberately designed to reduce steps, this seems to be at cross purposes with the intended aim.

Although popular, self-etching adhesive cements—ie, all-in-one cement containing acidic primers—do not offer shear bond strengths to enamel equal to those achieved by traditional approaches with adhesive systems that separate the primers from the resin cement.8 Even so, it is difficult to find studies that prove they are not clinically effective.9 They are very useful for indirect restorations but not in a universal capacity. Their use should be predicated on the basis of preparation type, quality of tooth substrate, and materials to which one is adhering.

Up to this point, the discussion has focused on bonds to tooth substrate and not to materials. Direct materials, such as composite resins, require no special attention due to their inherent chemical compatibility with the adhesive systems. Indirect ceramic materials—such as the silicate-based glass content ceramics, the polycrystalline non-glass content ceramics such as alumina and zirconia, and the hybrid polymer ceramics—all require specific protocols involving chemical primers in addition to the chosen adhesive system.

To achieve adherence to ceramics with silica glass content, some of the glass can be dissolved with hydrofluoric acid for micromechanical retention, which may not be sufficient to secure a lasting bond due to the relative weakness of the micromechanical aspect and the inherent chemical incompatibility with adhesive resin cement and the glass ceramic. Silane couplers are needed, because they are very good at promoting adhesion in ceramic silica–based materials with a dissimilar material such as composite resin cements. Silane, a volatile compound with a short shelf life, is subject to rapid degradation when exposed to air, making it somewhat technique sensitive, so proper use is essential.

Polycrystalline ceramics are devoid of glass and hence cannot be adhered to micromechanically through hydrofluoric acid etching. Bonding to these materials and metal alloys is achieved through chemical means only, using primers such as MDP, which can also form a chemical bond with calcium and hydroxyapatite due to the presence of a phosphate group, which equates to a better bond to tooth structure itself.

Clearly adhesion dentistry is a complex entity with no clear one-size-fits-all approach when all factors are considered. But technology has not stood still, with recent developments and advances in chemical engineering leading the way.

Self-etchers are here to stay, total etch remains a viable and effective technique, and the self-adhesive resin cements have their niche. Simplification of technique continues and chemicals are available to bond effectively to any restorative material. What, if any, improvements might be forthcoming, and how reliable are they?

Recently introduced are an entirely new category of adhesive products, which transcend all previous adhesive approaches. Those now called “universal” are purported to have the following attributes:

All necessary chemicals in one bottle for all adhesive clinical indications

Easy-to-follow protocols for dentists and assistants

High performance with all substrates (tooth or restorative material)

The first product of this type, Scotchbond™ Universal (3M ESPE), was introduced in early 2012, representing the beginning of the trend to the “universal” category. There is now a growing amount of in vitro data and clinical experience suggesting that this adhesive category represents a breakthrough in adhesive dentistry, fulfilling the promise of simple and effective adhesive solutions. While important, it should be remembered that in vitro evidence can be very difficult to apply to clinical results; therefore, favorable clinical experiences need to continue.

On the other hand, all of these chemistries contained within the single bottle are known and have been used separately and successfully for years, making “empiricism” on the part of the clinician easy tounderstand if the term “universal” is to be applied. Scotchbond Universal and the later-to-follow products (eg, Adhese Universal, Ivoclar Vivadent, www.ivoclarvivadent.us; All-Bond Universal®, Bisco, www.bisco.com; Futurabond M+, Voco Dental, www.voco.com; Prime&Bond Elect®, DENTSPLY, www.dentsply.com) may very well change and improve what dentists have struggled in many cases to master, especially if the current trend in their increased usage reaches the benchmark 5-year clinical experience level with successful in vivo outcomes mirroring the in vitro data.

For dentists considering one of these systems, it is important to understand that the formulations are not identical among this universal adhesive class and investigation is in order. Variations exist in overall chemical composition, concentrations, and recommendations/techniques for use. For example, some have added HEMA, different solvents, and unique additions such as the polyalkenoic acid copolymer found in glass ionomers. Some react universally with all resin cements in dual-cure modes, whereas others require separate activator additions. There are reasons for all the above, according to the manufacturers, so investigation is warranted. Nonetheless, the significance of having a one-bottle product and a compatible adhesive resin cement where needed for any adhesive procedure—be it direct or indirect—cannot be understated.

To perform due diligence regarding adhesive systems, start with a visit to each manufacturer’s website for technical profiles and available independent data in addition to the manufacturer’s own internal data. This mounting body of evidence supporting the effectiveness of this new adhesive category, along with supporting anecdotal reports, should encourage dentists to re-evaluate their adhesion protocols, mindful of the time frames.10 The science appears to be solid, with the reminder that each product has subtle nuances that a prudent clinician should query. It seems, at this juncture, it is quite possible that dentistry is heading toward greatly reducing the “risk tolerance” factor in the adhesive dentistry equation, which is good news for dentists and patients.