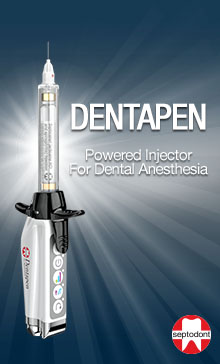 Techniques for decreasing or eliminating this common side effect

Dentist-prescribed at-home and professionally monitored in-office tooth whitening have provided convenient and predictable results. Although over-the-counter (OTC) whitening products have an outstanding convenience factor associated with them, they lack the professional and individualized instruction and guidance that dentist-prescribed bleaching agents have, which may lessen their predictability and ultimately their efficacy.

Whitening treatments can now be easily customized to the patient’s lifestyle. For patients who prefer to whiten on their own schedule, custom trays with take home carbamide peroxide or hydrogen peroxide have been very popular. Prefilled disposable trays of whitening product have found their niche market for patients who are too busy or don’t want to have impressions taken for custom trays or for those who want to follow up their in-office bleaching treatments without requiring a custom custom tray (Opalescence® go 10% and 15% hydrogen peroxide, Ultradent Products, www.ultradent.com). Prefilled trays also have the convenience factor, since patients can place the sealed packet of trays in their purse or bag, use them for 15 to 60 minutes during the day, and then throw them away. Although one in-office bleaching treatment does not traditionally provide the dramatic whitening results that take-home does, it has become increasingly popular and appealing since its prominent exposure on televised makeover reality shows.1 Regardless of the method or concentration of carbamide peroxide or hydrogen peroxide that is used, there is still a percentage of patients who will experience sensitivity from bleaching.2

Incidence and Causes of Sensitivity

The literature confirming the safety and efficacy of at-home bleaching using a custom tray and 10% carbamide peroxide has been vast since its introduction in 1989. Despite the glowing endorsement bleaching has received, tooth hypersensitivity remains the number one reported adverse effect for dentist-prescribed at-home, OTC, and in-office bleaching.3-5 In general, the higher the concentration of peroxide, the higher the potential for sensitivity.2,6 Custom tray bleaching using 10% carbamide peroxide (~3.5% hydrogen peroxide) has a reported incidence of 25% to 75% sensitivity among users. In-office bleaching systems use the highest concentrations of hydrogen peroxide (up to 40%) with a range of 10% to 90% reporting sensitivity.7,8 Although the sensitivity from bleaching is transient, it can be severe enough that patients are forced to discontinue bleaching and may even require analgesics in some cases.2,3

Brännström’s theory of hydrodynamics is traditionally recognized as the cause of dentin hypersensitivity. However, sensitivity associated with bleaching is more likely from the easy penetration and passage of the hydrogen peroxide and urea through the enamel, dentin, and pulp within 5 to 15 minutes of contact with the intact enamel.2,9 The resulting sensitivity is essentially a reversible pulpitis. It should be noted that an improperly fitting tray may be a secondary cause for sensitivity.2

A thorough exam, including x-rays, should precede any bleaching treatment. Pre-existing sensitivity should be identified and addressed before bleaching.1,10 Spending an appropriate amount of time with patients to explain the bleaching process and educate them regarding the potential for sensitivity is key to their compliance and willingness to bleach. Reassure patients that should they experience sensitivity, it is temporary. If it becomes severe, they should return to the office for a desensitizing agent or updated instructions for their bleaching regimen.

For pre-existing sensitivity, recommend brushing twice daily with a potassium nitrate and fluoride toothpaste (eg, Sensodyne) for 2 weeks before bleaching.2,3,11 Advise patients to remove acidic foods and beverages from their diet. Instruct patients to wear empty trays for 1 or 2 nights to test for sensitivity. Patients may also benefit from wearing their bleaching tray filled with desensitizing toothpaste or gel (UltraEZ®, Ultradent Products) for 1 or 2 nights before bleaching. Once bleaching has begun, patients should continue brushing with desensitizing toothpaste 30 minutes before inserting the trays, and then brush 30 minutes after the trays have been removed.2 If gingival recession is present, trim the bleaching tray so as to avoid the exposed root surface. Assure the patient that even though the whole tooth may not be covered in bleach, the bleaching agent penetrates the tooth all the way to the pulp within about 5 to 15 minutes, and the molecules go in all directions.12-14 The same principle allows bleaching around orthodontic brackets successfully without any stains remaining under the bracket.12,13,15-17 If using in-office bleach, place the gingival barrier onto the exposed root surface to prevent the bleaching agent from migrating onto the sensitive area.

The following case represents an example that uses some of the materials and techniques described above to desensitize a patient’s teeth during an in-office bleaching treatment.

A 12-year-old male patient of record reported to the office for in-office bleaching treatment. The patient was current on his 6-month check-up and cleaning (Figure 1). He exhibited excellent oral hygiene and showed no signs of pathology. In questioning the patient before starting the bleaching treatment, he had no history of dentin hypersensitivity.

Lip balm was applied to the patient’s lips before placing cheek retractors. A combination bite block/tongue retractor (IsoBlock™, Ultradent Products) was placed between the upper and lower arch to create separation between the arches and to protect the tongue during bleaching (Figure 2). A gingival barrier (OpalDam®, Ultradent Products) was applied to the gingival tissue adjacent to the teeth to be bleached and extended one tooth beyond the intended bleaching area (Figure 3). A 40% hydrogen peroxide bleaching agent (Opalescence® Boost, Ultradent Products) was used on the upper teeth from canine to canine (Figure 4). Two 20-minute applications were used as per the manufacturer’s instructions.

At the end of treatment, the bleach was removed from his teeth using high volume suction followed by air water rinse. The gingival barrier was removed, and another thorough rinse was performed. The IsoBlock and then the cheek retractors were removed (Figure 5).

Before leaving the office, a prefilled disposable tray containing potassium nitrate and fluoride was adapted to the upper and lower arch to prevent post-bleaching sensitivity (Figures 6 through 9). The patient was instructed to wear the desensitizing tray for at least 30 minutes, but was also told the potassium and nitrate and fluoride product was active up to 8 to 10 hours if he needed to prolong the wearing time.