The development of nickel-titanium (NiTi) root canal instruments has revolutionized the provision of root canal procedures. From orifice opening to canal enlargement and shaping, the delivery of contemporary procedures on a predictable basis has been enhanced for both the general practitioner and specialist. Still, some practitioners have not yet embraced the use of NiTi instruments. This article addresses concerns about NiTi instruments and provides evidence of the overall quality of root canal procedures achieved with their use in the contemporary practice.

NiTi alloys possess unique properties that appear ideally suited for the demands made on root canal instruments. Among these is the ability to negotiate varying degrees of canal curvature during continuous rotation without undergoing permanent plastic deformation or failure, which is often observed with stainless steel instruments.1 NiTi metals range from the super elastic material that formed the initial basis for these instruments to more revolutionary materials, such as M-Wire™ (DENTSPLY Tulsa Dental Specialties, www.tulsadentalspecialties.com). There are also NiTi metals that have been enhanced using sophisticated technologies, such as R-phase, controlled memory technology, and thermomechanical processes. These metals can be fabricated into a wide range of instrument designs through twisting or grinding, resulting in a plethora of complex formations, as evidenced by the wide variety of popular rotary instruments available.

Recently, NiTi instruments have been developed that function in a reciprocal manner (eg, WaveOne®, DENTSPLY Tulsa Dental Specialties) as opposed to a rotary motion. Both rotary and reciprocal instruments use a side-cutting action and possess loosely spiraled flutes. During function, reciprocal instruments reverse their direction on each oscillation, thereby reducing debris buildup in the flutes and minimizing stress on the file and the tooth. Their centering ability in curved canals has been shown to be quite good.2 Specific electric motors to support both types of motion are available.

The manufacturers of NiTi files all claim to have various levels of superiority, with products developed to provide enhanced resistance to cyclic fatigue; increased flexibility; sharper, more efficient cutting edges; and better centering ability in the root canal. Even with these claims, there has been resistance on the part of many clinicians to adopt this new technology because of fear of instrument fracture,3,4 a fear that may be realized depending on clinician manipulation of the instrument in the ever-challenging root canal system (Figure 1). The most important factor that leads to fracture is metal fatigue.4 This is especially predominate when working in curved root canals, where half of the instrument is in tension (outside of the curve) and the other half in compression (inside of the curve), with stresses being the greatest in the curvature.5

Even if instrument fracture is not a concern or does not occur, each instrument will have a mean number of cycles to failure that is determined by a multitude of factors, such as speed of application, pressure, canal radius, canal angle, instrument diameter, and properties inherent to the metal.5,6 In an attempt minimize or negate these influences, manufacturers are hard at work attempting to improve the instrument design and alter the inherent and surface properties of the NiTi used for these instruments.6,7

Instrument reuse and sterilization procedures also directly impact the clinical application of these instruments. Studies have indicated that after sterilization there appears to be a decrease in cutting efficiency, an increase in the depth of surface irregularities and surface roughness, and evidence of crack initiation and propagation.8,9 In fact, instruments that underwent the greatest number of sterilizations showed in-depth distributions of chemical composition that were different from those seen in the control group. This was identified as the result of greater amounts of titanium oxide on the surfaces of the sterilized instruments. These same files also showed a decrease in cutting efficiency compared with those of the control group.10 Furthermore, newer NiTi files that were twisted instead of machined showed some evidence of decreased resistance to cyclic fatigue with increased cumulative autoclaving procedures.11 The findings are mixed regarding support for a single-use instrument as opposed to instrument sterilization and the contemporary use of various percentages of sodium hypochlorite. Clinical data indicate that single use is preferable to prevent instrument separation in the root canal (especially with smaller-sized instruments), assist in the provision of care in an aseptic environment, and prevent the potential for cross-contamination among patients.12-15

NiTi root canal instruments (eg, EndoSequence®, Brasseler USA, www.brasselerusa.com; HyFlex® CM™, Coltene® Endo, www.hyflexcm.com; ProFile®, ProTaper Universal, ProTaper Next, Vortex, Vortex Blue®, WaveOne, DENTSPLY Tulsa Dental Specialties; K3, K3™XF Sybron Dental Specialties, Inc.) are quite versatile in application and should be used based on the demands of the root canal anatomy (Figure 2 through Figure 5). However, standard applications and techniques that are designed to shape and enlarge the root canal system, along with some level of cleaning, are advocated by the manufacturers. The approach focuses mainly on a crown-down technique in which larger instruments are used in the coronal portion of the root canal followed by the use of instruments in decreasing size as they approach the desired apical terminating point in the canal.16

Some instruments are designed to cut and shape the canal in specific areas, whereas others are more generic in their applications. For example, the ProTaper Universal system uses shaping instruments that have extreme variability along the length of their shaft to open the canal. These instruments are then followed by their finishing instruments, which are also variable tapered and focus primarily on the shaping and enlargement of the apical 3 mm to 4 mm of the canal. In the case of standard .04- or .06-tapered instruments, the shape based on the specific instrument is imparted to the canal walls, moving from coronal to apical, or in some cases apical to coronal, during enlargement and shaping.

Although the application of these amazing instruments to the complexities of the root canal system has enabled predictable outcomes in enlarging and shaping, the ultimate cleaning is done by the use of good irrigation, which dissolves the tissue and rinses residual debris from the canal along with killing the majority of bacteria that may be present.17 Additional bacterial control and elimination is achieved through the use of specific disinfectants and medicaments. However, without the ideal shaping and error-free enlargement that is generally achieved through the use of NiTi root canal instruments, the overall quality of the procedure would not be achieved in contemporary practice.

A commonly realized benefit of using NiTi instruments is the ability to apply them using hybrid techniques that work both within a single manufacturer’s system and across systems (Figure 6 and Figure 7). For example, orifice openers from one system may be coupled with gross canal enlargement and shaping from a second system, followed by apical finishing with a third system and the application of hand root canal files to cap off the procedure. With the recognition of the complexities and challenges within what some deem as the simple opening of a root, the application of a hybrid approach to achieving success may very well be the norm for many practitioners.

At first glance, it would appear to be obvious that these instruments would enhance clinical outcomes; however, there is a paucity of sound evidence-based studies regarding their impact when used in primary root canal procedures.18 Evidence available from one clinical trial suggests that better maintenance of the original canal curvature and shape results in increased success rates. In addition, ledging of root canals results in reduced success rates. Evidence from two studies indicates that the use of NiTi instruments (either hand or rotary) significantly increases the success rates of primary nonsurgical root canal procedures compared with the use of stainless steel hand instruments. Three other investigations failed to show any significant differences.18

However, when doing a cost-minimization analysis of root canal procedures before and after educational experiences in the use of NiTi rotary techniques in general practice, root canal procedures in teeth with one canal and with three or more canals were completed in significantly fewer instrumentation sessions. On the assumption that treatment outcomes were successful, this study noted that the use of NiTi instrumentation, following proper educational guidance and experience, was more cost effective.19

Manufacturers are constantly developing sophisticated technologies and new NiTi instruments to offer clinicians the best possible options for complex root canal procedures. Available clinical evidence suggests that there are advantages to adopting the use of NiTi instruments both in terms of patient outcomes and cost.

James L. Gutmann, DDS, serves as a consultant to DENTSPLY Tulsa Dental Specialities; however, he has no financial interest in the products or techniques discussed in this paper.

19. Koch M, Tegelberg A, Eckerlund I, Axelsson S. A cost-minimization analysis of root canal treatment before and after education in nickel-titanium rotary technique in general practice. Int Endod J. 2012;45(7):633-641. 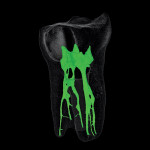