A novel technique for preparing a post space immediately after root canal therapy.

There was a time when the indiscriminate use of posts after the completion of endodontic therapy was commonplace in dentistry. This practice was an integral part of the “macro-structural retention era” of dentistry where large, non-adhesive amalgam cores had to be physically retained in place with the aid of such structural elements (as a rigidly cemented post) deep in the root canal of an endodontically treated tooth. Today’s advancements in bond strength to dentin along with the modern concepts of minimally invasive dentistry have dramatically reduced the need for the old-fashioned cemented posts. The traditional idea that posts strengthen or reinforce a tooth has also been disproven. It is now clear that removing excessive amounts of tooth structure with a post drill in order to cement a post can have a negative effect on the structural integrity of any tooth.1,2

Because evaluations of teeth with posts, cores, and crowns showed that 10% of all failures were due to root fracture,1,3 it is clear that clinicians need to employ techniques that reduce the removal of tooth structure when preparing a post space. In addition, clinicians need to reconsider the role and function of posts and what they can and cannot do for restorative needs. In one study, 91% of vertically fractured roots had poorly designed posts that were described as “too long, too wide, or both.”4

First and foremost, however, cemented rigid posts that retain non-adhesive cores to cemented crowns need to be differentiated from bonded posts that support bonded cores and bonded crowns. The difference between these two models is the concentration of force at stress points that are a byproduct of cementing restorations in the first case scenario vs bonding every interface that helps to distribute forces evenly and improves fracture resistance in the second case scenario.5,6

Although the use of posts is unnecessary for restoring most endodontic cases where adequate ferrule is present, there are situations in which a post is still needed to provide retention for the core material prior to bonding a crown.7 The post extends the core indirectly by gaining additional retention from inside the root and, therefore, helps to support the crown indirectly. The strength of a tooth comes from the remaining tooth structure, and every effort should be made to preserve this tooth structure and not to remove any more than is absolutely necessary.

The following case demonstrates a novel approach for preparing a post space immediately after root canal therapy. It eliminates the use of a post drill and allows for a conservative post space preparation (resulting in constant taper preparation of the root canal) without further removing dentin. The bonding of a matching, glass-fiber post to this constant taper endodontic preparation is the basis of this technique, which works very well with the EndoSequence instrumentation and obturation system (Brasseler USA; www.brasselerusa.com). This synergy is a result of the concept of matching master files, with corresponding gutta-percha master cones and glass fiber posts (Figure 1). This post preparation technique can also work with other “non-carrier” based instrumentation and obturation systems provided that they have matching posts for their instrumentation system.

The mandibular anterior teeth (Nos. 22 through 27) of a 65-year-old male patient were treatment planned by the referring prosthodontist for pre-prosthetic endodontic therapy and restoration with post cores and crowns ((Figure 2 and Figure 3).). Tooth No. 23 was diagnosed as necrotic with a periapical lesion. The maxillary anterior teeth were also treatment planned in a similar fashion in order to increase the vertical dimension of occlusion that had collapsed significantly due to chronic attrition. The restorative dentist requested post spaces after endodontic therapy was completed.

Because the patient travelled a long distance for care, the six maxillary and the six mandibular teeth were endodontically treated in two separate appointments, with each appointment concentrating on one arch. The treatment of the mandibular sextant alone is shown in this report (Figure 4). After instrumentation and irrigation using the EndoSequence protocol for cleaning and shaping, the corresponding size master cones were fitted to each root canal based on the earlier established working lengths. Using locking pliers, the corresponding master cone for each tooth was locked at the reference point corresponding to its working length (Figure 5). Prior to the placement of EndoSequence BC Sealer in each canal, the matching glass-fiber post was fitted in each tooth according to the technique, and the depth of post penetration was measured and noted for each tooth using a silicone stopper. Once the fitting length of each post was determined, the total length of each fitted gutta-percha cone was subtracted from the total length of the corresponding post for that root (Figure 6). The resulting number was equivalent to the length of the apical segment of the gutta-percha that would remain in the canal once the post was cemented in place. For example, if the working length of the fitted gutta-percha was 20 mm and the depth of the post in that root was 15 mm, the remaining gutta-percha segment, once a post space was prepared, was deemed to be a 5-mm segment. Once this depth was measured for each tooth, a #15 scalpel was used (along with the help of a ruler) to make a notch on the side of the fitted gutta-percha in each tooth exactly at the point where the post was to interface against the gutta-percha tip. This could also be done visually by placing the post adjacent to the fitted cone (Figure 7). This was done while the cone was still secured in place by the locking pliers locked at the working length measurement of that cone.

The notch was cut 90% of the way through the gutta-percha, allowing the apical segment to be loose but still attached to the main cone (Figure 8). This was done for all six previously fitted cones at their corresponding length (Figure 9). After notching each cone, EndoSequence BC Sealer was placed in each canal (Figure 10) and each cone was cemented in place (Figure 11).

After all of the cones were cemented, the handle from each cone was held between the thumb and the index finger and severed by twisting each cone’s handle in a clockwise direction several turns while applying light apical pressure (to prevent the apical segment from rotating) (Figure 12). This was done for each cone until all six handles were separated. The handles were then collected and examined to be sure the apical segment had been severed completely (Figure 13). After the segments were separated, a small plugger (size 8) was used to gently condense the apical segment of the gutta-percha in each tooth (Figure 14). Ideally, this plugger should also be pre-fitted for each tooth to the appropriate length with a silicone stopper before obturation. This technique is similar to the warm vertical condensation technique except that this is a cold vertical condensation of bioceramic filler rather than thermoplasticized gutta-percha.

After cementation of the cones, separation of the handles, and condensation, the remaining sealer in the canal walls was washed out with water and ultrasonic activation at its lowest setting for about 3 to 5 seconds per canal (Figure 15). Particular attention was made to avoid contacting the ultrasonic tip with the apical segment of the gutta-percha. Therefore, the ultrasonic tip was inserted only halfway in the post space. Any sealer remaining on canal walls was easily washed out with this technique. After washing the post space, the remaining water in the space was dried with the aid of an EndoVac (Philips Oral Healthcare) (Figure 16). Alternatively, a paper point could have been used to do this step.

All posts were fitted again to confirm their fit to their appropriate lengths (Figure 17) and the access was filled with Cavit™ (3M ESPE, www.3mespe.com). The fitted posts were marked for each tooth and mailed to the referring prosthodontist for use during the subsequent restorative visit. The postoperative radiograph shows the completed case with all post spaces (Figure 18).

In this technique, pre-fitting the gutta-percha cone prior to scoring the gutta-percha and having an accurate cone fit with adequate apical resistance form is important to avoid pushing the apical segment out of the apex after separation and condensation. However, the presence of adequate resistance form is fundamental in any kind of obturation system and is no different for this technique than others.

Scoring the gutta-percha cone 90% through with a scalpel is precise work that should be done under magnification and illumination. Occasionally, if the scoring of the gutta-percha results in cutting through the whole apical gutta-percha segment, the separated segment can be cemented into place by picking it up with a cotton pliers and inserting it in the canal. This segment should not be handled with non-sterile gloves and should remain sterile throughout the scoring and transferring process. The remaining gutta-percha handle can then be used to condense/guide this apical segment to length. Inadequate depth of scoring (less than 90% through the cone) may prevent separation of the handle from the apical segment during rotation. In the author’s experience, it is better to err on the side of cutting through the cone too much than scoring it inadequately, which may result in pulling the whole cone out of the canal after rotation instead of only the handle.

The use of ultrasonics with water to clean the resulting post space is only indicated in conjunction with the use of the EndoSequence BC Sealer, as this is the only hydrophilic sealer that will wash out with water prior to setting. The use of water with a hydrophobic sealer (such as a ZOE or resin-based sealers) is contraindicated because it will not clean the sealer residue. A lipid solvent would be more useful in those cases.

Although this novel post preparation concept can be used with other root canal obturation systems provided they use non-resorbable sealers that are dimensionally stable, the technique works particularly well with a constant-taper system that incorporates matching gutta-percha cones and posts with their corresponding rotary instruments and uses a dimensionally stable, non-resorbable sealer that can be used as a filler instead of thermoplastic gutta-percha.

This efficient technique for post preparation virtually eliminates the use of drills, heat, or heated instruments to sear off the gutta-percha and prepare a space for a post. As a result, no additional tooth structure is removed other than that which is necessary for the cleaning and shaping of the root canal system. Furthermore, a need for the setting of the sealer prior to cementation is eliminated, as the space can be prepared during the same appointment as the root canal therapy. 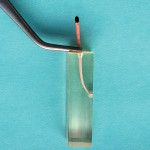 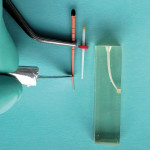 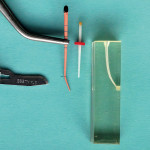